We purchased a house last October. It was a very warm when we had the house inspected in September. The house has a direct vent propane fireplace in the living room. The propane to the fireplace was turned off, and the inspector said that legally he couldn't turn it on, so that part of the house was just skimmed over Once the cold weather came, we started noticing major drafts coming through the fireplace vents. I made a reflective insulation cover for the exterior vent, since there was no pilot lit, but it didn't stop the drafts. On the inside, I hung a variety of things covering the fireplace to try to stop the drafts (blankets, reflective insulation sheet, etc), but our living room was still really cold. During January we had over a week of single digit temps. The magnets I had holding my draft stoppers up were actually forming ice on them...inside the house.

Now that it's summer I finally got a chance to inspect what's going on. I found that the underside of the bump-out was just covered with some aluminum soffit. Directly above the soffit was just some batt insulation. Nothing was air sealed. The 3" hole bored through for the gas line wasn't sealed. No insulation inside the bump-out. I'm needing to know the best and least invasive way to get this sealed up before winter gets here. Because the bump-out was framed up with the 'studs' turned flat, there's not really enough room to hold a standard batt. I'd considered buying one of the 200 sqft spray foam kits from Menards, but wasn't sure if I'd be able to get my body wedged up inside the bump-out which is 10+ feet off the ground. and be able to maneuver around the firebox to reach all the way to the top of the bump-out.

I'd considered removing the siding and the lower half of sheathing from one of the short sides of the bumpout and spray foaming what I can from that opening, and then reinstalling the sheathing and doing the rest from underneath. I don't know what the proper thing to do around the exhaust pipe though. Just trying to figure out what's the best way to go about this task or if I'm going way overkill?

Here's a video showing what it currently looks like.

What is the manufacturer & model of your fireplace? I'd like to look up the install manual to
see what the venting configuration is.
Toggle signature
Bob
D

DAKSY said:
What is the manufacturer & model of your fireplace? I'd like to look up the install manual to
see what the venting configuration is.
Click to expand...

I haven’t been able to locate any manufacturer tags on it anywhere. These two labels are on the back of the firebox. I’ve pulled the vents off and looked under near the blower and on top and can’t find any id plate. I’ve included some photos of the front of it in case you can tell a brand from the looks of it. Or give me some suggestions on where to find the model plate? I've looked everywhere I can think of and can see without disassembling things. The only thing I could find was the spec plate on the gas valve.

EDIT: based on the part number on the notice sticker, I found this manual which matches up with how the louvers, controls, and wire screen in front of the glass look. It also has the same p/n for the Notice sticker in the illustrated parts diagram. https://www.desatech.com/manuals/Fireplaces/model_CD36M_manual_109194-01D.pdf 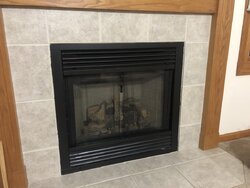 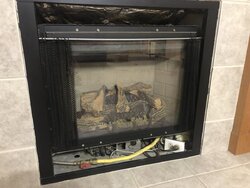 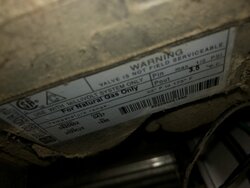 There are so many things wrong with that installation. The fireplace is supposed to sit on a "solid, continuous base". There should be plywood under the fireplace. The plywood supports the fireplace but also acts as a draft stop. the hole where the gas line goes through the rim joist should be sealed with caulking. I have attached pictures of what a typical installation should look like. You probably wont be able to do this without reframing the entire chase. What you can do though is to remove the siding and cut out the sheathing above the venting and build a baffle like the second picture shows. You can use 2" rigid insulation on the exterior up to the baffle and this will create an insulated envelope. seal the pipe where it penetrates the exterior wall with high temp caulking.

Even if you do seal everything like Lennox65 suggested, without the pilot light burning, that metal firebox will be cold.
Those fireplaces are built with a cavity that surrounds the actual firebox. This allows a blower to draw air in thru
the bottom louvers & direct that air behind the firebox & across the top of it where it will get heated before entering
the room thru the upper louvers. Without the pilot lit, that air flow will naturally convect in the OPPOSITE direction.
Warmed air will enter the top louvers & drop down as it gets cooled. It will exit the bottom louvers & feel like a cold draft.
One thing troubles me. The pictures indicate that it's a Natural Gas Appliance, but in the video, you indicate that the unit
is a Propane fireplace?
Toggle signature
Bob
L

Innovative Hearth Products (IHP) is the company that now handles all the legacy parts for those fireplaces that were manufactured by DESA or FMI.
D

I’m not opposed to lighting the pilot light, but I really want to get the drafts sealed up.

Regarding the gas valve, it does say Natural gas only, but looking up that particular valve, they do show LP specs and the manual posted above shows how to install the LP conversion kit. I do not have a natural gas source to my house. LP only.

I do like the upper baffle idea as it’ll be a smaller area to insulate. It’d rather not reframe the entire bump out. With what I’ve got, what is my best course of action?
L

Without fully insulating the entire exterior cavity, anything that you do will have almost no benefit. Right now you effectively have a 36"X36" hole in your wall. All of your heat is going out through it and cold air is being drawn in.
D

I'm all for insulating and sealing it up. I'd rather not remove the fireplace to avoid having to redo the tile surround, etc. So the question is how do I go about insulating from the outside in. I don't have an issue with removing the siding and sheathing, but how would I go about insulating without any sheathing in place? That's why I considered doing the spray foam, because I could remove a short side of the sheathing, foam the remaining two sides, reinstall the sheathing and foam the rest from the bottom. Then add some rigid foam in the framing cavities under the firebox and spray foam the gaps to air seal it. I guess if I build a horizontal partition/baffle above the firebox and insulated it, I could reinstall the sheathing and possibly spray foam the entire smaller "envelope" from the opening in the bottom??
L

I guess if you were to remove the siding and some of the sheathing approx 4' up from the deck, then you may be able to sprayfoam the sides and back of the chase. Then you could build the horizontal baffle at the height that you had applied the spray foam. I don't know what the codes are for having exposed spray foam insulation and I don't know if you would have enough access to cover it with something.
D

I hadn’t considered needing to cover the spray foam to meet code.

What about using 2” rigid foam between the framing and caulking/expanding foam the seams. I could technically do that with the sheathing off. Would it need to be covered too? Just spit balling here. I appreciate the insight and suggestions.
L

What about using 2” rigid foam between the framing and caulking/expanding foam the seams. I could technically do that with the sheathing off. Would it need to be covered too? Just spit balling here. I appreciate the insight and suggestions.
Click to expand...

That may be the easiest way. I don't believe that you would have to cover the rigid foam insulation. Just be sure that you have the proper clearance away from the sides and back of the fireplace.

I would use the greenish 100% fire proof ROXUL insulation available at Lowe’s & Home Depot to pass the fire codes.

J
Blocking one side of a double opening gas fireplace.