Dropping standing dead ash and cherry during the winter

For the last few weeks my little section of the world has been below freezing, sometimes at or below zero but generally teens and 20's for the high temps, no rain either, just a couple snow events.
This past Sunday I was bored and felt a little cabin fever, so I grabbed my outside gear, the saw and an axe and took a walk into the woods, I found (1) standing dead cherry with the top blown out and missing bark sections, a standing dead ash, pretty much the same except it had most of its bark and then another fallen dead cherry.
Dropped the 2 dead tree's and cut 4ft sections, the diameters were about 8" across and then bucked the dead cherry above the snow into 4ft lengths, carried all the logs out and split them long ways in the yard making long quarters.
Interesting to note, the logs all split well due to being frozen, I cut used the fiskers to split with the logs on there side since they were all 4ft's, not a lot of effort was needed.
I loaded the firepit and made a nice fire, was wonderful to get some fresh air, outside beer and have friends over, it even started snowing a bit which made it very wintery, but it was only 25deg out so no one was freezing.
Lets talk about moisture, all pieces burnt fairly well for an open fire pit, the cherry wasnt to bad, it caught well and not a lot of smoke, the standing dead ash which has been dead for 2+ years still had moisture bubbling from the log ends, this is important to note, because I wouldnt burn that stuff in my stove if I ran out of wood. 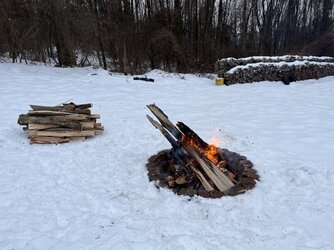 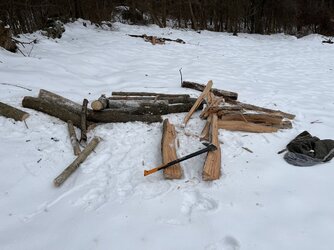 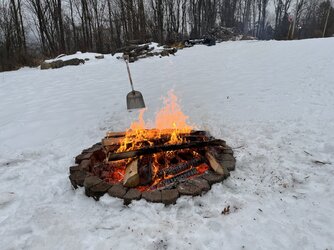 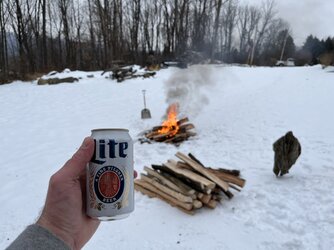 Love having fires in the snow. Big storm coming tomorrow. I may grab some pallets and make a fire while I build a fort with my kids. cheers!
Toggle signature
Enviro Kodiak 1700 Insert
Reactions: fbelec

Why are you burning cherry in a bonfire??? That stuff is awesome smoking wood!
We use it for chicken, bacon, ribs, and everything else. We also use white, golden, and red oak, apple, and hickory.
Toggle signature
Stove: Kitchen Queen 480
Reactions: Stinkpickle and fbelec

Years ago we used to take the local boy scouts out for snow camping. We usually waited until the end of the winter when the snow pack was 5 or 6 feet deep in the woods. We would pick a spot with lots of deadfall and keep the fire going. Usually by Saturday night the snow will have melted down to bare ground and there would be wall of snow around the pit. No chainsaws so it was all bowsaw and motivated boy scouts.
Toggle signature
Burnham Wood Boiler, 550 gallons un-pressurized storage, VC Defiant (mostly retired), PV powered solar hot water, 4,770 watts of solar grid tie electric, cold temp mini split heat pump and Unimog to haul the wood

Isaac Carlson said:
Why are you burning cherry in a bonfire??? That stuff is awesome smoking wood!
Click to expand...

D
Tips on my first season

I find fresh wood easier to split then dry, contrary to others...