A bit of a conundrum here, granted I am pretty ignorant on firewood.

Just had a new delivery of about 1.5 cords of mixed wood. My first time using this supplier but they had good recommendations from a few friends. A bit late in the season for delivery so I probably didn't get their driest stuff.

Built a fire log cabin style with four pieces, some scraps/bark as kindling. Main logs just seem to char and don't ignite. Once the scraps go out, so does the fire. There is ongoing hissing, and either moisture or sap is visible on the ends of the logs.

This happened with the first attempt with the new wood, so I popped for a moisture meter, suspecting that it wasn't seasoned enough.

Meter came today and a random sampling of the wood shows low moisture in a vast majority of the wood with only some huge pieces being over 20%. Most is around 10-15, some less.

20 minutes ago I tried to build another fire the same way, with the same result. Once it "went out" after the kindling died I hit the ends of the logs with the meter and was again around 15%. Fire just started to die again, I put in the below piece showing 7.9%, and another that was showing under 15% when measured on all sides. Will see if these catch and start to rage.

- House built in 50s, main fireplace in living room, another in the basement immediately below
- Everything was inspected as a part of home sale over the summer. Dont believe flues were cleaned but inspector didn't note that it was needed
- Fire built on regular style grate
- Nearby window opened to make sure enough air
- First attempt with new wood had some visible smoke into the basement, but only noticed after fire went out, did not see where coming from. May not have had window cracked enough causing smoke to draw down other flue? No basement smoke so far with the current ongoing attempt
- Previous home owner "had a lot of fires" according to neighbors


Is it possible that the wood is reading dry on all exterior sides but is too wet on the inside?

What else could be the problem? Last week I bought 4 prepackaged mixed wood bags from home depot and we did not have this problem - making me think it's the wood. 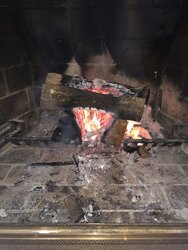 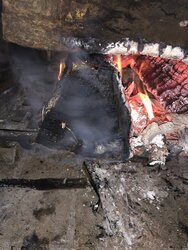 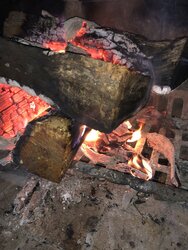 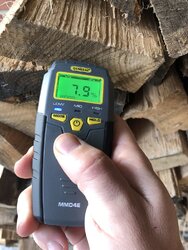 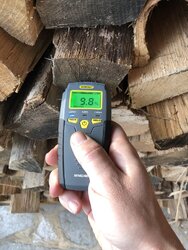 The wood moisture content needs to be measured on the inside of the wood, not on the outside or ends. To do this take a log and split it in half, then test in the middle of the freshly exposed face of the wood. Press in the contacts firmly. For the most accurate reading, the wood should be around room temperature. I wouldn't surprised if the large pieces still measure >30% moisture content inside.
Last edited: Dec 1, 2020
Toggle signature
PE Alderlea T6, Jotul F602
The most important tool in the wood burning process and the largest variable is the one that is running the stove.
Reactions: D8Chumley and NickW

That wood is wet. No other explanation for the hissing and moisture expelling in the ends. Bring a piece inside for 12 hours. Then split it and check the split on the freshly split face. That’ll give u an accurate reading. My guess is over 25% if it’s hissing. Wood from a dealer is NEVER dry, that’s why you have to buy a year in advance. Most just leave it in log form until you order it, then they run it through a processor that cuts it and splits it. Then they deliver it to you. It will not dry properly until it’s split and stacked, period. It’s a lesson most of us learn the hard way the first year or two.
Toggle signature
Regency i2400 Insert
Reactions: D8Chumley

The wood is wet. Split it open and test the inside.
G

If the exterior is reading 5-15%, and the interior upon splitting reads...say 25.....any estimates on how long will be until it's ready?

Next year.
Reactions: MR. GLO, CentralVAWoodHeat, D8Chumley and 1 other person

In future make sure to split a piece and get the reading from the fresh face; as other said if it’s hissing etc it’s wet. Hardwoods take 2-3 years to properly season. Depending on your location and temps likely at least another year before that wood is ready to burn. Lots of great info on here about solar kilns etc if interested. Find a new supply of dry wood for this year if you can. Good luck.

Looks like oak to me. I’d say hopefully next year. Get it stacked in single rows, and just cover the top. I use metal roofing sheets. Leave the sides exposed for air flow. Preferably in a spot that gets lots of sun and wind. Fresh oak takes three good years to dry properly. But there’s nothing like it once it’s dry.
Toggle signature
Regency i2400 Insert
D

Should be getting a splitting wedge this weekend and will test out a variety of pieces. Hopefully there are enough in the cord that are decent enough to get me through winter.
You must log in or register to reply here.

S
How to start a fire in a Hearthstone stove!

A
Friend’s stove being worrisome