I recently picked up a Englander 25-pdv (2002) variety and started working on it. I am fairly familiar with the Englander stoves as I own a few of them....this said I've never seen the following error

The stove has been cleaned out...all motors work/etc. The fire will be burning nicely/etc for 20-30 minutes then all of the sudden the stove literally just shuts down ..everything powers off (including combustion motor) and I get this error. I've seen plenty of e1/e2 errors etc but this is new.

I'm assuming this a board issue that comes about once the stove gets to a certain temperature. My question is...if this board is toast... does anyone know of any downsides to putting a post 2004 englander 25-pdv board in this 2002 version stove? I happen to have a working post 2004 control board... My understanding is there are some slight differences in the stoves but from what I can see ...all the same motors/same stove design (steel thickness/airways/combustion vacumn sensor/etc. 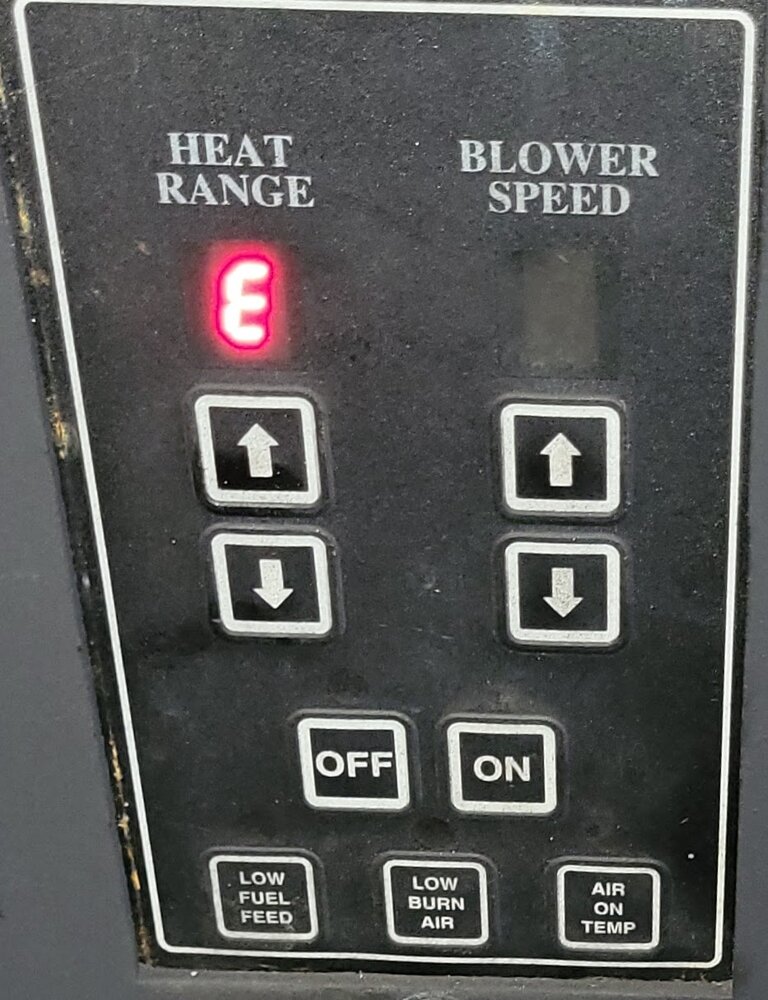 should have said... thoughts, insights and opinions would be appreciated

Working off of memory here but I think this has come up before... I seem to recall that the pre '04 stoves only have 1 vac switch and that you might need to put the vac switch jumper on the board? Other than that (?), it should work. But again, this is going off of memory which these days, well, you get what you paid for.

I was thinking the same thing... you are correct as the 02 version only has a vac sensor on the combustion motor chamber but not on the main chamber like the never stoves. At this is what I have on my 25-pdv 07 model. Thanks

Absolutely no harm giving it a try. Let us know how it works if you do it.

I had a 25 year old Englander that I loved. I did all the work on it myself. I finally replaced it a few years ago. It seems like I remember it never was quite the same after I replaced the board. I got rid of it because I was tired of replacing parts on it, though. Good stoves, those Englanders.
Reactions: jwoot

pulpfictionfan said:
Absolutely no harm giving it a try. Let us know how it works if you do it.

I had a 25 year old Englander that I loved. I did all the work on it myself. I finally replaced it a few years ago. It seems like I remember it never was quite the same after I replaced the board. I got rid of it because I was tired of replacing parts on it, though. Good stoves, those Englanders.
Click to expand...

Debatable in my opinion. I had one, an early one and I wore it out, yes you can wear a stove out.

I still remember when I bought it. Was way before any of this became mainstream. I vented it through a window (took the glass pane out and installed a sheet metal pane with a suitable hole for the vent pipe drilled in it) and I ran it that way for years btw.

It was an old style positive draft unit (which are prone to burn back in the hopper if the hopper lid isn't tightly sealed). Had that happen one time and after that I kept the lid tightly closed.

It had no ash pan so it had to be cleaned out every other day and it was a 2 auger system. Top auger dropped the pellets to the lower auger which turned constantly. The top auger was controlled by the 'brain box' and the settings were crude and not very adjustable.

Pellet wise, I had no choice but Lignetics. Was the only one available at that time.

Got tired of replacing components so I sold it and got what I have now, the 6039 HF. it's kind of old school too, no fancy igniter (I start it with a handfull of pellets and some jelled firestarter, no issue with me because I run corn so I have to start it on pellets or no fire...

I did change the original 2 button brain box to a 4 button user programmable control. Still have the original 2 button board in the garage somewhere and along the way, I learned how to maintain the drive motors, replace bushings with real ball bearings and how to take apart the reduction drives and service them. In the almost 20 years I've had this unit, I've never replaced one component, I just maintain them religiously.

Next year will be new venting time. My venting is showing it's age, corn is hard on stainless liners, the nitric acid vapor eventually eats them up. No issue really. The old girl has paid for itself 10 times over it what it's saved me in propane cost.

Maybe next year I'll spring for a Harman and sell this one. You never know.
Toggle signature
*Stove instructions are to be used for lighting that first fire, not reading........

"Debatable in my opinion. I had one, an early one and I wore it out, yes you can wear a stove out."
> agreed....I actually did try using a newer board in the stove but honestly it just felt "off" if that makes sense. everything ran cleanly but really felt not safe. It was always burning very hot (+450-500f) I most likely will be pulling useful parts on that stove and recycling the rest. No real harm really...but I always try to error on the side of caution and safety.
You must log in or register to reply here.