The technicians suggested replacing, but I want some outside opinions before throwing in the towel. I've got a regularly serviced St Croix Hastings in good cosmetic shape that I bought used a few years ago for about $600. Had no trouble the first few seasons (replaced an igniter, nothing major) but had an issue this year where the Versa Grate failed. This caused the firebox to no longer be flush, resulting in lots of issues including bad fires, smoke, and ash and pellet build-up that resulted in a small hopper fire.
I found a decent work-around, by extending the firebox with some wire and aluminum foil, which seemed to fix the issue. Techs came, and confirmed that it was the Versa grate system, and said they'd recommend replacing vs repairing, as the cost was $2k+. Other posts here mentioned that the versa grate isn't totally required to use the stove effectively, so I figured I'd go with my existing solution until the stove gave up, but just a few weeks later the fuse blew, and the stove wouldn't start. I replaced both fuses, and the stove turns on, and passes pressure check, but the auger no longer turns. No error lights on the control panel, but no pellets dropped. I'm a novice, but I cleaned and vacuumed the hopper and gave the auger a little wiggle to see if I could knock it loose, and took the side and back off to see if I could pinpoint the issue. As far as I could tell, I couldn't see the motor trying to spin. It's a pretty stove that serves my needs well when it works, and I don't want to scrap it if I don't have to, but I don't want to chase bad money with good if it's time to give up the ghost. Really appreciate any more experienced opinions if I should listen to the techs, or invest in repairing it.

You need to find new and honest technicians. For 2k,you could totally rebuild that stove,parts and labor, and probably still have cash left over for several steak dinners.
Before you do anything rash, why not call and talk to this guy-

Mt Bob said:
You need to find new and honest technicians. For 2k,you could totally rebuild that stove,parts and labor, and probably still have cash left over for several steak dinners.
Before you do anything rash, why not call and talk to this guy-

OK thanks for the perspective and suggestion. The site says they're not accepting any new home appointments now due to covid, but that might not be updated so I'll give them a shout. Have you used them before or heard from others on their quality of work?

He is a long distance friend, excellent reputation. Just his thoughts are worth a call.
Toggle signature
92 integra 06 accentra
Reactions: DMS
K

I have a Hastings and have been through every inch of it. It’s a simple setup, easy to work on and reliable. your problem could be as simple as a jammed auger or perhaps the auger motor or gearbox has failed. Either way, you need someone to help who isn’t going to rip you off.

Have you tried holding your hand on the auger motor while pushing the auger button? First thing to do is see if auger motor is trying, then pull the motor and try turning auger. The bronze bushing in the top of auger tube is known for getting tight and binding auger. Easy fix, pull auger and clean shaft end and reoil.
Toggle signature
Harman P38 Since '05 I JUST CONVERTED IT TO A P43 AUTO IGNITION!
St Croix Lancaster Since '09 A corn burner that will burn pellets also
Reactions: DMS
D

rickwai said:
Have you tried holding your hand on the auger motor while pushing the auger button? First thing to do is see if auger motor is trying, then pull the motor and try turning auger. The bronze bushing in the top of auger tube is known for getting tight and binding auger. Easy fix, pull auger and clean shaft end and reoil.
Click to expand...

I have opened it up and watched when the auger is trying to turn, and I couldn't tell if anything was happening, but I haven't put my hand on it. What would I be feeling for to know if the motor was trying? To pull the motor, do I just loosen the auger set screw with a hex wrench, and is the arrow in the image below pointing to the set screw? Once the motor is out, is it pretty straightfoward to pull the auger? I'm new to this, and really appreciate the help and patience. 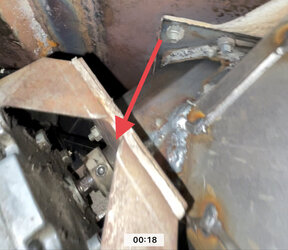 If that auger is jammed, it could be jammed in a position where it can't move any more so you may not even see it wiggle even if its trying.
The answer to your question is YES. That set screw goes through a hole in the auger shaft and then clamps onto the motor/gearbox shaft. Once the motor is out, you take out the 4 screws on the plate behind it and the auger can be pulled right out. (You may want to scoop most/all of the pellets out of the pellet box first because once you pull out the auger the pellets can fall out the bottom there too) The advice by rickwai is spot on about the auger shaft. The bushing at the top end (the end you can't see) gets real tight over time. After you pull the auger shaft, clean and grease the end of it and try it back in place and make sure it rotates very freely. Also, you may want a new gasket for the auger plate, and there is a thrust washer that goes on the bottom of auger shaft too. You should replace both. You can get them cheaply at pellet-stove-parts-4-less and others. But before you buy any parts, I would pull the auger assy out and see what you've got going on. The auger motor can be easily tested by rigging a cord directly to it and plugging it into the wall.

If you don't have the manual that shows the parts breakdown for the Hastings you can download it for free from St Croix.

The one linked below is good.