Harman 52I insert. Medallion issue solved, but now this.

Well, in my earlier post, I lamented not being able to get out the warped medallion. I kept fooling with it, and realized it was frozen in place, not even jiggling. So I got a hammer and loosened it up. It was indeed warped and pieces broke off where the warping was worst. I was able to finally get the medallion out, and the heat exchangers, and then clean it as per the instructions. It needed it for sure!
However, now it won't light. I turn it on in room temp mode, but the ignitor light doesn't come on, and the feed motor light doesnt come on. Same issue in test mode.
What would yall guess, motherboard?
Eventually status light blinks five times, showing it failed to light in whatever their time frame is.
Hate to pay someone to come out here to fix it, as the trip charge out here is nuts, and I doubt they would have the parts on board, so likely have to pay AGAIN. Ugh...

Definitely a vacuum issue. Did you replace the medallion? From all the hammering to get the medallion out you may have knocked a bunch of ash down out of your liner and it is blocking the exhaust outlet. Run your shop vac hose up the square opening above the comb. blower that is where the ash would fall into, there is a cavity at the top of that tube that houses the esp probe and the liner exits right there. That would be my best guess as long as fan is running like Mt Bob said.
Toggle signature
Harman P38 Since '05 I JUST CONVERTED IT TO A P43 AUTO IGNITION!
St Croix Lancaster Since '09 A corn burner that will burn pellets also
Reactions: Washed-Up
O

Combustion fan does run, will drag the vacuum out and try again ... Thanks. Oh, and yes, I did replace the medallion...
O

Well, you guys were right.. It lit up! Yay! However, there are now flames coming out on. both sides of the tray that the pellets get pushed into, so I must not have it b ack together right.. I will shut down, and try again... 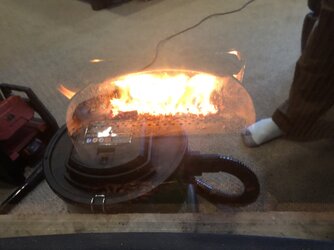 You may need a burn pot gasket,it looks that bad. Which would explain why the medallion warped suddenly.
Toggle signature
92 integra 06 accentra
Reactions: Washed-Up
O

Well, took it back apart, and installed the medallion and flame guide back in.. Looking good! Yay.
Thank you gents for your help, greatly appreciated!!
Reactions: Mt Bob and Washed-Up

So the medallion and flame guide must not have been in properly. Glad you are up and running,lots of winter is left.
Toggle signature
92 integra 06 accentra
You must log in or register to reply here.

W
Harman 52i insert. It seems not enough combustion air is causing the fire to quickly quit and stop the stove.