Ashful said:
On which side of "most," might a moderately wealthy asthmatic find himself?
Click to expand...

Fine. Again, humans can deal with all of the challenges of climate change to protect ourselves. But it could quite conceivably be more expensive in the long run than taking some actions now (which IS happening to at least some degree - see also the thread about projected renewable energy growth in 2016).

A credible pessimistic forecast entails increased cost of living and few luxuries for a typical family - fewer 2500+ sq foot houses, high priority for owning air conditioning than on having hardwood floors and a 3rd or 4th big screen TV in your home, more focus on high yield food production like grains than on high value products like free range livestock or cotton

Many other species will not be so fortunate. The polar bear concerns have been discussed to death. Some fish species do not cope well with modest changes in water temperature. A moderate number of plant species that live in areas that are seasonally snowed over would be out-competed by more aggressive species that can't survive those conditions or need long growing seasons. Other species have proven more adaptable, and others will be displaced to new areas, such as the sort of temperate plant life I suggested could push cold climate plant life out of its niche.
Toggle signature
Lopi Declaration Plus for the cold days
Goodman heat pump for the warm days

iamlucky13 said:
Many other species will not be so fortunate.
Click to expand...

A recent NOVA on PBS explored how diminishing krill populations at the poles are impacting the the larger animals.
Its interesting that we "notice" fewer polar bears but seldom think about the critters at the bottom of the food chain and how them may be impacted by climate change -- and how krill loss ultimately impacts things like polar bears and maybe humans.

“If there are no dogs in Heaven, then when I die I want to go where they went.” – Will Rogers

The evil twin of greenhouse gases is ocean acidification. The effects of acidification span the full food chain. Coral reefs are at risk which create a diverse aquatic ecosystem. The largest mammals depend on calcifiers like tiny pteropods which are vulnerable due to loss of exoskeleton. Some changes happen rapidly. On the west coast we've lost our sea stars (starfish) already possibly due to higher sea temps. They disappeared in a couple years.
Toggle signature
PE Alderlea T6, Jotul F602
The most important tool in the wood burning process and the largest variable is the one that is running the stove.

The Hippocratic Oath principle of "do no harm" is for me a useful principle in analyzing climate change. The Wikipedia statement of the principle is useful also: "given an existing problem, it may be better not to do something, or even to do nothing, than to risk causing more harm than good."

In applying this principle I find little if any harm caused by actions to mitigate climate change, as these actions have the effect of seeking to maintain a historical climate which has been beneficial to nearly all life as we know it, while their is little if any evidence that the progression of climate change will remain beneficial to life as we know it. Therefore, mitigation actions cause no harm, and given the symptoms and outcomes of climate change, for me it is clear that doing nothing does not carry a risk of causing more harm than good.

Of course, denying the existence of climate change is the easy way out, but I also find little benefit in ignoring symptoms with the hope that they are not evidence of any underlying problem. Again from Wikipedia, a symptom is a "departure from normal function or feeling which is noticed by a patient, reflecting the presence of an unusual state." Symptoms of climate change in the environment are rampant, and the presence of an unusual state in the environment has become obvious.
Toggle signature
Jim - Feb 2018 to present - Chevy Bolt EV- 37,000+ miles
Mar 2019 to present - Tesla Model 3 - 36,000+ miles
Oct 2013 / Jul 2015 - 12.3 kw solar PV system - 105,000+ kWh
2007 Tarm Solo Plus 40 with 1000 gallons pressurized storage
1500 sf shop, radiant in-floor heat; 1500 sf home wood stove heat
D 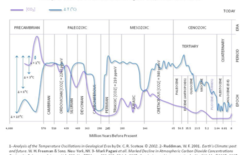 long term climate change in one chart. kind of obvious ,many of factors, humans one of them.

Lest you thought that whole climate thing was solved already....