Hello
New to this forum and to wood pellet burners, but not to wood stoves and coal stokers.
I just acquired a VC Reliance 2220 from a local CL add.
The stove seems to be in fairly good shape, feeder works, exhaust blower works, and the two distribution blowers also work.

The problem right now is that the control board is non functional.
Now I know that these things are as rare as hen's teeth and that there are no spare parts and no documentation available for the board, so my plan is to build a new control system from a micro PLC.

My background is as a controls engineer and I previously built control systems for both my Harman Magnum and Harman VF3000 coal stoker, so I know this is a very doable task.

What I'm not sure about is the general operating parameters for this stove.

So if some of the VC pellet burners could chime in it would be a big help.

So here are the questions.

Thanks much.
Bill A.
Reactions: RyanMcD
B

The VC Reliance is once again a working pellet stove.

The main problem with the unit was the control board. The triac that controls the feeder motor was blown along with the inline fuse that protects it.
I replaced it with a new one from Mouser electronics and also found that a trace on the circuit board was broken that fed the local 12 volt supply.

The other problem with the stove was the exhaust temperature TC. All that was left of the original one was the wires. I bought a new one, a Tempco ungrounded type J from Ebay, problem solved.

After I had fired it up I noticed that smoke was coming from around the door frame. The cast iron frame and steel weldment were sealed with refractory cement which didn't take well to the bouncy ride in truck bringing it home. This required taking off the two side cast iron panels and sealing everything up with high temp silicone.

New gaskets and and a fresh coat of paint finished up the job. 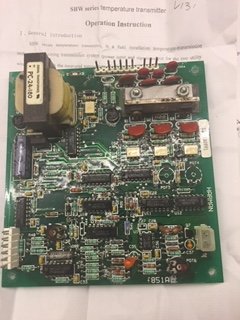 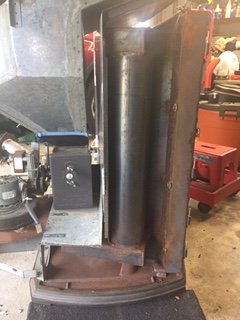 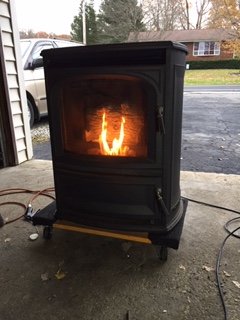 This stove is pretty much all Harman on the inside, a Pellet Pro 2 control board, feeder and combustion blower.

It really is a pretty stove and it seems to put out good heat too.

Nice!! Welcome to the Hearth. Triac’s and optoisolaters seems to be an issue with alot of stoves. Nuthing like a good relay and rheostats. But society demands automation. Lol
Last edited: Nov 3, 2018
Expand Signature
Are you SURE you cleaned it good?
Where is your manual?

Just saw this ....
I have a Reliance 2220 that has burned between 3 -4 tons every year since 1992 when we bought new, last winter I was in hosp so no use then. It did get a new TC in about 1993 or so not long after purchase, otherwise it's been great. I will keep this thread in mind.

Bill A said:
So if some of the VC pellet burners could chime in it would be a big help.

So here are the questions.

The Reliance is up and running, has been burning for the last 5 days and so far so good.
The weather has been colder this weekend, dipping down into the teens at night and she has kept up keeping the living room at about 71 or so.
I have the stove dial set to about 8 or 9 o'clock which is low to medium low burn and it uses about 1 bag every 28 to 30 hours just like TBear said it would.

My initial impressions are its a bit noisier then when I tested it in the garage, probably didn't notice the noise out there. When the feeder runs it is quite a bit noisier, not excessive but definitely noticeable from across the room.

I ran the pellet vent into the original 6" double wall chimney and that seems to work very well. I intentionally pulled the plug and the chimney drafts well enough to keep all the smoke out.

Going to let it run 24/7 for now and will look for a local source of pellets in Sussex Co. NJ. 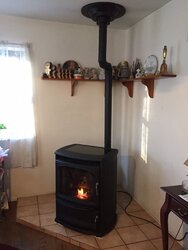 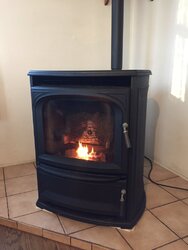 I think i'm gonna have to maybe regasket the door (s) this spring when I finish flue update, I'll likely pull it outside, go over fans, etc real good, check auger bearings, do a good low pressure dusting off of board. Maybe shop for a new thermocouple.

… etc … All that was left of the original one was the wires. I bought a new one, a Tempco ungrounded type J from Ebay, problem solved.

But the part # that you posted should work as well and it's cheaper.
What is important is that it is type J and the element is insulated from the outer metal sheath..
B

So after living with the stove for a few weeks I had come to the conclusion that the exhaust blower was the source of most of the noise.
I took it out and ran it on the bench and noticed that besides the slightly unbalanced impeller, that the motor bearings were shot. It would hit a resonance point and really start a racket.

It had the same 4.75" impeller, a 3000 rpm motor, and it drew about the same current. It was also ball bearing and made by Fasco so that was the deal clincher.
I ordered the unit and installed it last Friday, much quieter.
I had to drill out the set screw on the old impeller, it was long since rusted tight.
After removing the old motor I used the supplied gasket to cut a 5" hole on the top of the blower housing to mount the new assembly. I made sure to paint the bottom of the mounting plate and impeller with high temperature stove paint and coat the motor shaft and set screw with never seize so future repairs would be easier.

Now when I want to remove the blower, it is only 6 small screws and the whole unit will lift off making cleaning much easier.
Its a lot quieter too when it runs. 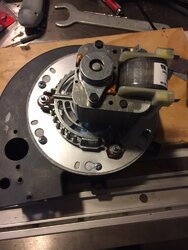 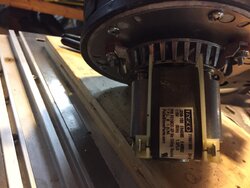 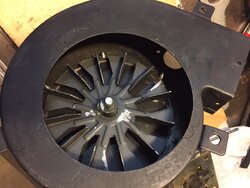 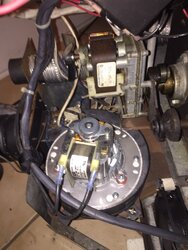