So far it’s been a mild winter up here.

50º when I woke up this morning and the temp stayed there all day. Burning electrons in the heat pump for the duration. Looks like we'll be cooling down by tomorrow evening, so that's the likely time for the next fire.
Expand Signature
PE Alderlea T6, Jotul F602
The most important tool in the wood burning process and the largest variable is the one that is running the stove.

No sign of winter here. I haven't even had to put the driveway markers in yet. If I waited this late in a normal year i would have to drill through the frost. It does look like more normal temps are coming this weekend so its time to get the plow out, markers in, load up the wood furnace!
Expand Signature
Dennis

It's been abnormally warm here as well, it even rained this morning which isn't normal at all. The frost really hasn't penetrated deep into the ground yet, most of the industrial roads should be froze rock hard by now but I was out in the field yesterday and the potholes and mud were everywhere. Even seen a picture of a trackhoe south of town stuck in the mud, he used 3 rigmats to walk down a right-of-way, found a soft spot and sank to the bottom of the counterweight while still sitting on the mat. That'll be fun to get out, over a 1/2 mile to the nearest road.

72 here today.....new record high. It's only going down to the low 50s tonight. Now I know I'm quite a bit south of y'all Yankees but dang....that's still extremely warm for here compared to normal.
Expand Signature
Buck 74

i was in dennis ma this weekend (cape cod) during what was suppose to be a 10 15 inch snow storm here in chelmsford but ran at the cape. well the sun came out in the middle of the storm and it wasn't suppose to and warmed up to the mid to upper 50's so the wife and i took a walk on the beach. this truly is a weird winter so far
Expand Signature
vermont castings defiant 1
hearthstone 2

Still no frost here, looking very similar to last season, except using even less wood it seems to keep the house nice and toasty. I nice big fire a night is doing the trick most days.
F

I have 10 above right now, the coldest so far this winter and today’s high will be around 14 so I’ll have a few fires today. We have no snow at all so yesterday I got some straw to put over some of my septic system, I get nervous if it gets this late in the winter and there’s no snow yet.... freeze ups are expensive!

Looks like winter is coming in with vengence after an "easy 2 years" for our area, I'm painted 18-24" of snow, preliminary forecasts are already saying the snow will have a higher moisture content then typical storms, ie: expect tree damage and power outages.
I cleaned the garage yesterday, topped off the indoor wood rack, took the backhoe off the tractor and attached the grader blade and front snow pusher, so I'm ready to rock and roll here.
Expand Signature
2014 BK Princess, Husqvarna 359 w/ 20" bar, 465 rancher w/ 20" bar, Iron & Oak 24 ton FS, Kioti CK 4010 HST
M

WiscWoody said:
I have 10 above right now, the coldest so far this winter and today’s high will be around 14 so I’ll have a few fires today. We have no snow at all so yesterday I got some straw to put over some of my septic system, I get nervous if it gets this late in the winter and there’s no snow yet.... freeze ups are expensive!
Click to expand...

Typically I've never heard of a septic system freeze up, I wouldn't think you have much to worry about, that being said, you could be using some sort of system that isn't the typical we see here?
N

It definitely happens. Neighbors up the road had to replace their whole system a few years back because it froze out. Don't know if it's more common with mounds...?
Expand Signature
Summers Heat 50-SNC30 by Englander
Reactions: mcdougy
P

mcdougy said:
Typically I've never heard of a septic system freeze up, I wouldn't think you have much to worry about, that being said, you could be using some sort of system that isn't the typical we see here?
Click to expand...

My former girlfriend in VT had a frozen septic system. She corralled her horses on top of the field so the snow never built up which acts as insulation. It was an elevated system where the house went by gravity to a tank and then there was pump that pumped up hill to the leach field. The pumps had a discharge check valve on the outlet so the line to the field is always full. I think her distribution box actually froze in the leach field. Me neighbors gravity system froze once during a really cold winter. Its mounded system and my guess was over 20 years the pipes may have settled so that there were low points in the piping that froze.

My neighbor on the other side of me also had a field replaced in the middle of the winter after the holidays but my guess is that it was undersized for the house.
Expand Signature
Burnham Wood Boiler, 550 gallons un-pressurized storage, VC Defiant (mostly retired), PV powered solar hot water, 4,770 watts of solar grid tie electric, cold temp mini split heat pump and Unimog to haul the wood
Reactions: mcdougy

mcdougy said:
Typically I've never heard of a septic system freeze up, I wouldn't think you have much to worry about, that being said, you could be using some sort of system that isn't the typical we see here?
Click to expand...

Oh sure it happens if there’s not any or much snow cover and the frost goes deep. The frost line up here on a road or bare ground is 4 feet Deep. I’ve seen holding tanks freeze up as well as the 4" pipes going to the septic or holding tanks. It happens more in compacted and clayish soil like ours here is. I see your in Ontario Province and I’m sure it gets quite cold up there but possibly you always have a good snow cover before the bitter cold comes or you have more insulated septic systems up there and possibly some wastewater system codes that make that happen?
Last edited: Dec 14, 2020
M

Not sure fellas, in my 27 year career of mainly residential construction and maintaince i have never heard of a system freeze up. I asked my dad who has 57 years on the tools and he just gave me "the look" and said no. The systems you are describing are mainly raised beds or thats what they are referred to here, which are somewhat newish systems in the last 15-20 years , but are required more often than a conventional trench bed due to T times in the hard clay in many areas. As far as precaution steps, I don't see any of those either. Same old concrete tanks and 4" tile.if the tanks are deep, risers are added to get the topmto ground level. Which must let the cold penetrate easier. Now frozen ,snapped water lines 4-6feet below grade happen all the time when a winter with lack of snow shows its ugly side. Definitely not saying a frozen bed cant/doesn't happen but it sure isn't common and I've never seen anyone spread straw over the bed or tank to try and prevent it.
A

Septic system freeze ups do happen here, it all depends on how deep they are buried. Some friends had theirs freeze up a few times, there line from the tank to the mound runs directly under a sidewalk, it always froze under there as the frost could penetrate deeper. That section of sidewalk is no longer used in the winter. Long hot showers or hot baths also help to prevent freeze ups.

We actually have it better than in the southern portion of the province, 4-6 ft is pretty average, but our snow stays most of the winter. Where southern Alberta has lots of warming periods (called Chinooks) that tend to melt the snow and allow the frost to penetrate once it cools off again. Last winter the city of Calgary had lots of issues with this, in areas the frost went as deep as 10 feet, freezing lots of water lines as 10 feet is a pretty standard depth for water lines in this area.
Expand Signature
3kw Grid Tied Solar
Osburn Matrix
Husqvarna 550XP MKII
'14 F350 6.7 CCSB 6" lift on 37's
Reactions: mcdougy

I know for a fact the they can and do freeze here if there’s no snow cover and it gets damned cold out. I remember when my 4" pipe to the tank froze once in that situation and I looked in the tank and that was froze too. I think it got down to -30f the night before. I called my friend 50 miles west in Trego Wisconsin and he said his system was froze up too. I asked him if he was going to get it steamed open and he said nope, him and his wife were going to Florida for a few months as it was a good excuse to go south lol. A neighbor once had to have his pipes stemmed and his holding tank was too full to effectively do it, he had to use his ice fishing auger to cut a hole in the ice cap on top of the frozen tank So the pump truck could pump out the tank. No lie.
Reactions: mcdougy

Woke up to 50º this morning and it's been the same all day long and now into the night.
Expand Signature
PE Alderlea T6, Jotul F602
The most important tool in the wood burning process and the largest variable is the one that is running the stove.
M

I am wanting to start working on a shop, but it is too warm and muddy to do much but slip and slide in the slop.
A

It feels like winter here, temps are around freezing which is warmer than normal, but the snow is falling like crazy. Spent the day sledding, probably the earliest I've ever been out. 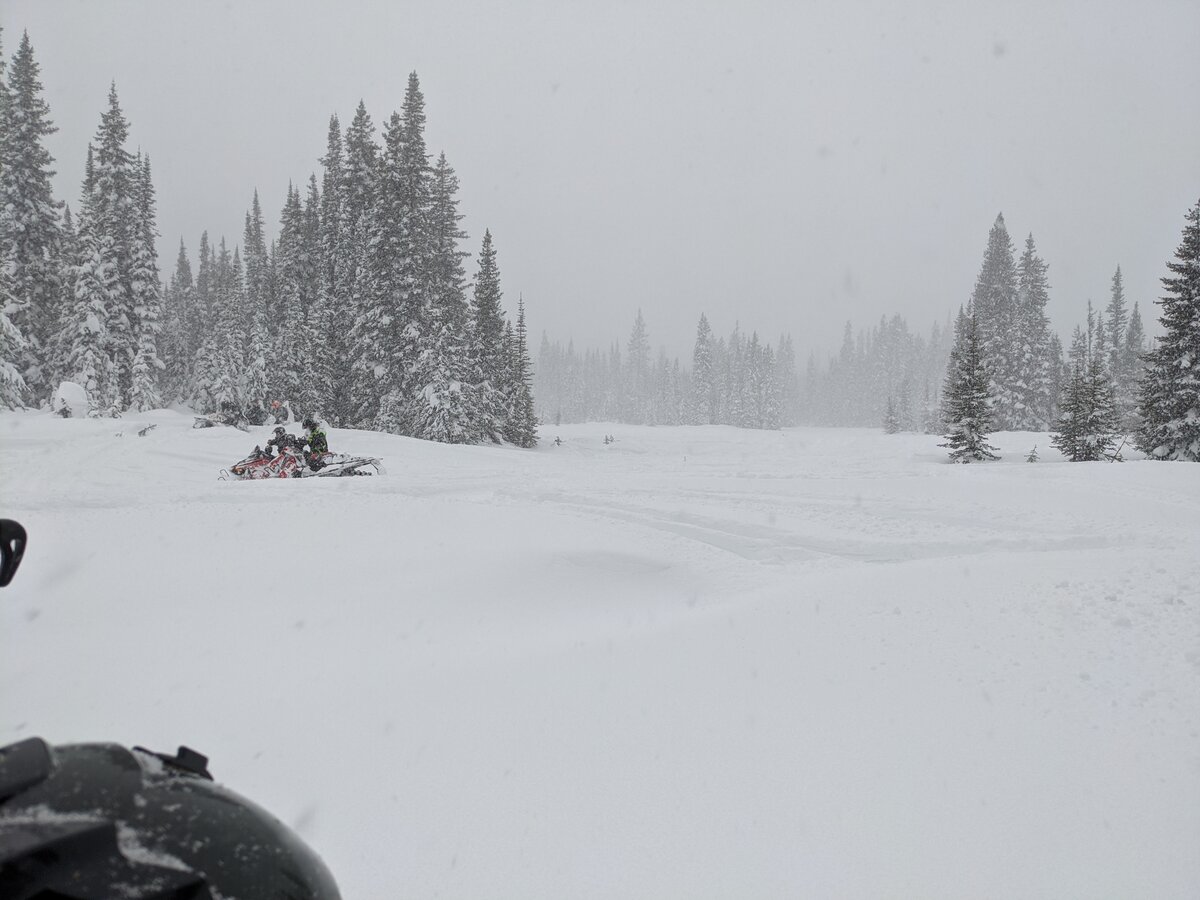 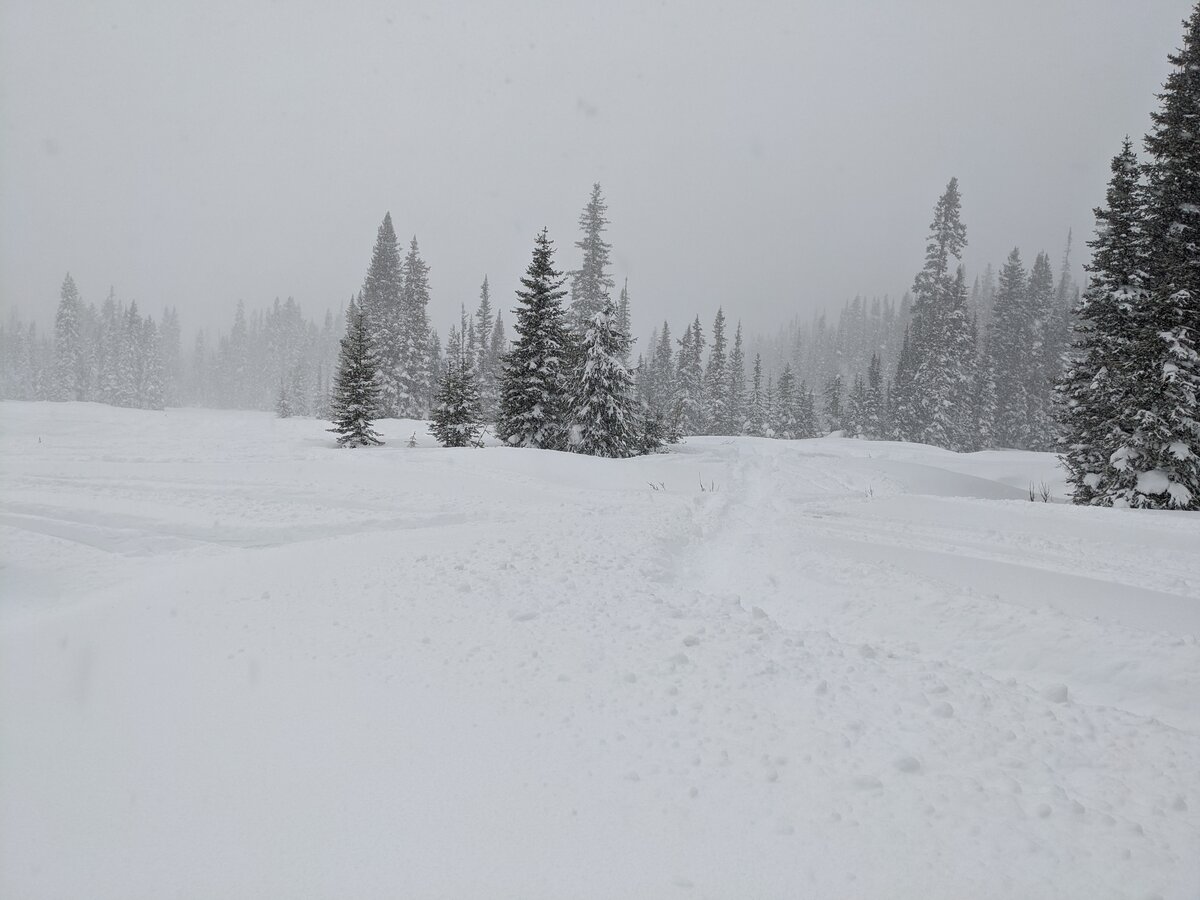 Took my sled out yesterday to finish clearing the feeder trail to the ITS trail system . . . but it was marginal snow . . . just enough to cool the sliders, not enough that you would want to hit the trails. I took the sled since it was either that or walk several miles.
Expand Signature
Jotul Oslo, MTD 27-ton wood splitter
Jonsered 555 chainsaw
2010 Nissan Titan . . . with a trailer
2017 Yamaha Kodiak 700 EPS with Saab Wood Hauling Trailer

Hitting the local ski mountain after work today, going to do a few runs, first time out all year and one of the better starts to the season around here, last 2 winters were marginal at best, it did get cold here and there, but every time a storm came, we were on the warm side of it, here's to hoping for a good winter for once.
Expand Signature
2014 BK Princess, Husqvarna 359 w/ 20" bar, 465 rancher w/ 20" bar, Iron & Oak 24 ton FS, Kioti CK 4010 HST
P