Finished restoring another of my 24in non cat Elms today . I love these , by far my favorite stove. But I may be bias because im from Vermont. Not sure yet if this one will stay in the collection or not yet... 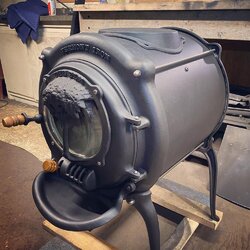 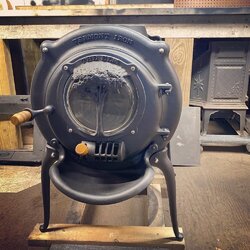 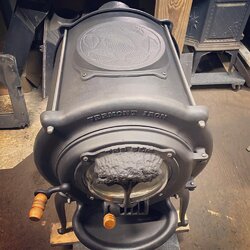 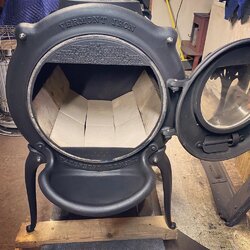 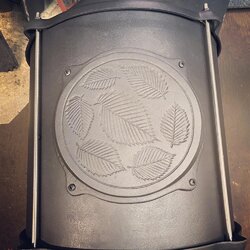 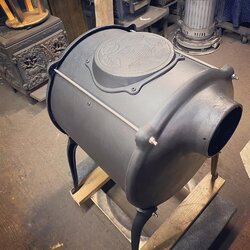 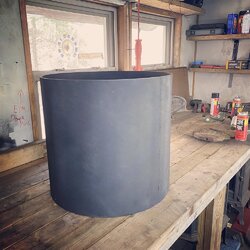 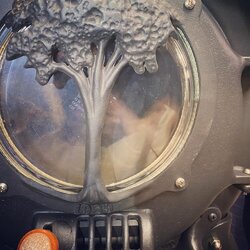 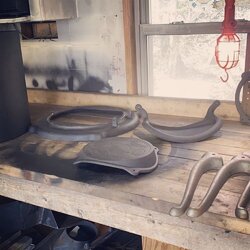 Stop restoring them and sell me one to restore. Been looking forever! Tried to get in touch with Steve several times to no avail.
Reactions: Deranged Hermit

Hoytman said:
Stop restoring them and sell me one to restore. Been looking forever! Tried to get in touch with Steve several times to no avail.
Click to expand...

Sorry bud, I enjoy them too much! You can find them, but in even decent shape not restored, they are not cheap. And they are harder to come by every year. Most of the ones I buy were never listed, they come to me from word of mouth mostly these days. Still not cheap I assure you
Reactions: Hoytman
P

that is one cool looking stove. made in Vermont awesome. i see some others in the back ground, they look like new great job.
Reactions: Deranged Hermit

Weren't these a part of the process that lead to the VC Defiant? I have found bits of information about these stoves before, but not much. Does it burn pretty clean? It's a very nice piece.
Expand Signature
Squirrel Power
- Morso 2b Classic
- Tim Sistem North Wood Cookstove (with DHW coil)
P

Sort of, the founder of VC and the founder of Elm all lived in a commune sort of situation in the Mad River Valley of VT. They lived in effectively a barn heated with a barrel stove. The claim is there was a competition amongst the friends for the best woodstove design and the Elm and VC was a result. A third stove design was developed but claimed impossible to build. If you look at the Elm, its basically a barrel stove on steroids although the owner did a lot research on improving the design to the point where his non cat version was cleaner than his cat version. I think there are links to You Tube videos of his experiments on that site I have kept an eye out over the years to get more info on the origin story as the story seems to be bit of a myth. The individuals were mostly well educated folks with a entrepreneurial spirit that were looking for ways to support themselves when they were not skiing and this was when off the grid living was making a resurgence. I dont see how a VC design could be made as a one off (unless they welded one up with plate) so unless they just submitted designs on paper I do not know how they could do an actual bakeoff. Nevertheless a great story. Many were architects and its obvious in the Elm and VC designs that aesthetics were important in the design.

For awhile the owner of the site was selling all of the parts to make a new stove.

The reputation in the northeast kingdom of VT 15 years ago when I lived there for awhile was they were a high output stove that didnt turn down well. That works fine in drafty old home (of which there are many in rural VT) .I think most folks own them as much as a piece of functional art (somewhat steam punk) as an actual stove.
Expand Signature
Burnham Wood Boiler, 550 gallons un-pressurized storage, VC Defiant (mostly retired), PV powered solar hot water, 4,770 watts of solar grid tie electric, cold temp mini split heat pump and Unimog to haul the wood

in 1992 me and a friend drove up to the VC factory and store, from south east mass, i came back with an intrepid 2, had it for 20 years, great stove.

we where given a tour of the facility where they where coating the cast parts of the stove it was pretty cool. parts when in a funky brown color and came out red. on the way back we got caught up in a snow storm, we where in a toyota pick up with the stove strapped down in the back. what a trip, but it was worth it.
Reactions: Deranged Hermit

Lots of info on Steves website- Vermontironstove.com
Steve does still supply parts, he just does not do many refurbs a year any more. And does not build new anymore.
And they have zero affiliation with Vermont Castings, other than they were in the same contest and VC submitted the first defiant in the same contest, and went into production.
And Steve Slatter was still improving the design, but could not afford to get it epa tested. It may have passed. The “Wildfire” Elm, was Steves creation if adding secondary air tubes in, and it does burn very clean, but testing is 50k, pass/fail.
And I have met people with Wildfires, and they are notorious for being hard to turn down. But I live in the heart of the NeK, and as bagger said, our old farmhouses have crap insulation so we all love a barrel stove, they seriously pump out heat ha.
They do actually sell Elms overseas, but they do not sell well in Europe. All the parts are now cast in Europe using original molds that Steve owns.
Peakbagger-Whereabouts in the Kingdom were you? I live out on rt14 out twords Jay.
Last edited: Apr 7, 2021
P

Good to know about Steve. He used to post a lot on Hearth.

I was hanging out in the Barton/Glover area for awhile 15 years ago. I went to a few social events with more than a few folks who had "charming old Vermont Houses" (also known as energy hogs) in their past. They might have been charming but they were energy hogs . Cut it in September and burn it in October seemed to be the normal approach to burning and 8 to 10 cords a year seemed not unusual. I worked with several Mad River valley folks who worked for Northern Power which was founded by one of the friends who hung out when the stoves were designed.

The Glover area is interesting as many of the flatlanders from NY and CT who came up for the Bread and Puppet annual events bought the back to the land lifestyle and bought up land and settled in the area. A lot of "aging hippy creative types" mixing with the old style farmers.

I and a lot of others were hoping that the big dollars being poured into the area by Stenger and that guy from Florida would put some real year round jobs into the area but that obviously crashed and burned. I guess these days about the only big business up there is the trash business

I had left voicemails and emails with zero returned from Steve. Not sure why. I was looking for parts to buy. Don’t need the stove “pipe”. Oh well...
You must log in or register to reply here.