First harvest of the new year today and my first cauliflower ever, I believe. It's roasting in the oven now with an olive oil/garlic/pecorino Romano sauce. I have two more in the garden that are forming heads. 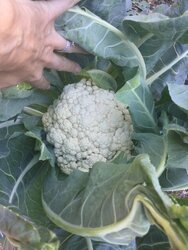 Here's a shot of the daikon radish I planted as a cover crop of sorts, though I put a fair amount of space between the plants. I'm not sure that they will be winter killed in our climate, though. My husband pulled up a large one a couple of weeks ago to kill it and then put it back in the soil. The greens are dying, but the root is still pretty solid. We want them to decompose in the garden beds. 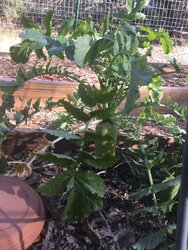 We garden using several raised garden beds and a decent patch of our yard turned into a squash and pumpkin patch. I expanded the dirt patch to double it in size a few weeks before Christmas and for this year we plan on expanding squash and pumpkin varieties to grow. We'd also like to add two more raised garden beds. Not 100% sure at the moment what we will grow in the garden beds this year. Last year it was green bell and red bell peppers, a billion or so tons of tomatoes, green beans, sugar snap peas, onions, kale, zucchini, kohlrabi, spaghetti squash, butternut squash, New England pie pumpkins, big max pumpkins, Connecticut Field pumpkin, and Long Island cheese wheel pumpkins.
Expand Signature
Woodstock Soapstone Ideal Steel
Echo CS-590, Poulan Pro 18in
27t splitter
GB splitting ax, Fiskars Isocore 8lb maul, Fiskars X-25 ax, too many wedges

I went looking for hanging pots today. My wife wants to grow herbs in the kitchen. The local nurseries didn't have anything so we'll probably have to do Amazon.
Expand Signature
Matt
Pacific Energy T5, Englander 30, and CFM 240007

@WoodBurnerInWI, that sounds lovely. We garden almost entirely in raised beds and large containers. I have a section of yard I'd love to give over to squash and pumpkins and other ramblers, but we live in an area of the country with the highest population of whitetail deer per acre, and it shows. We've fenced off our garden area quite well, and right now that's about all that I can care for in the summers. We'll see about years to come. Do you have pictures of your garden to share?

I'm very pleased that my older daughter made me up a template of our raised beds for my garden planning. The top bed is all asparagus, and the long one of the left has onions in it this season. We have daikon radishes planted in some as a cover crop, and in one of the square bed, lettuce has volunteered. 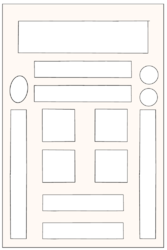 @EatenByLimestone, as a wife who has grown herbs inside years ago, may I suggest that you look specifically for hanging baskets designated as "self-watering"? They'll probably cost more but will be easier to maintain and run less risk of overfilling and spilling water on the floor if you're keeping them inside. We used some in a carpeted living room in a rental townhouse, and they were great. When we bought our own house, we used them outside, and eventually the UV light broke them down.
Expand Signature
Current home: Enviro Kodiak 1700 Insert

@DuaeGuttae Here are some photos of the garden from last summer, probably around early or mid July: 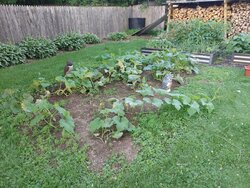 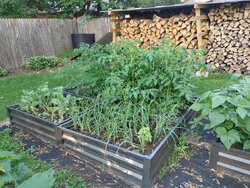 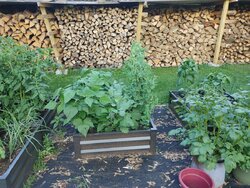 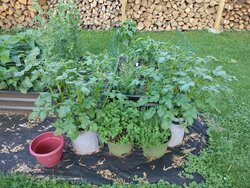 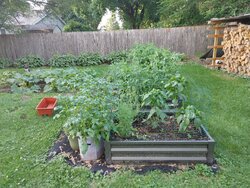 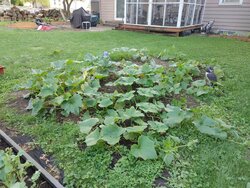 Looked at 2 more nurseries today. One gave me an old hanging pot that was used. The wife likes free better than buying something so we'll try that. Planted most of it with basil, but threw a bit of cilantro and parsely in on the sides.
Expand Signature
Matt
Pacific Energy T5, Englander 30, and CFM 240007

@WoodBurnerInWI, thanks for the photos. Everything looks beautiful, including those stack of wood! We moved from Virginia (lush and green) to the edge of Texas Hill Country a few years back. It's a much more arid climate here, and now I find myself surprised to see so much green in photos of other places. It's beautiful, though.

@EatenByLimestone, we always prefer free over purchased as well. Congratulations.

I have one tiny cilantro plant sprouted inside right now. We've never grown it before because my kids don't care for it in abundance. They do agree that it's helpful in small amounts, though. We've got lots of parsley in the garden, but I plan to start more soon.
Expand Signature
Current home: Enviro Kodiak 1700 Insert

I spent several hours working in the garden today. I have enough plants growing that I still need to keep my ollas filled, though it's a lot less frequent than in the summer, which is a blessing. We may even get some rain tonight and tomorrow, so I also mixed some blood meal, bone meal, and neem meal into my onion bed and put on more mulched leaves and watered them down.

Before we expanded our garden, our exterior fencing was only what we had scavenged from our property, and the garden was trapezoidal because the back panel was much longer than the gate. When we expanded the garden, we made it much more rectangular. All the long beds looked pretty reasonable, but the squares in the interior looked rather wonky because of the way they had been built to accommodate the original trapezoid. Today I removed tall trellises, moved some ollas, dug up lots of soil, raked away mulch from the exterior, and managed (with the help of my husband) to make the inner four squares much more square. Then I put all the soil back in and mulch back around. It was tiring, but it's very satisfying to have it done. Now it looks much more like the template I posted above.

Now I'm going to go make pizza with the last of the sauce I made and froze from our garden tomatoes.
Expand Signature
Current home: Enviro Kodiak 1700 Insert

A good day of work that will pay off for years!
Expand Signature
Matt
Pacific Energy T5, Englander 30, and CFM 240007

We just harvested the last of the tomatoes from the greenhouse. That Early Girl plant went in last April, though started in February. Surprisingly, the last tomatoes we have been getting for the past month have been smaller, but extra sweet and tasty. Outside we are still getting nice harvests of broccoli sprouts every couple weeks, plus chard and kale. And there are some fall lettuce starts that are getting close to be ready for their first picking. I have them under remay fabric to reduce the pounding from the rain. It seems to help.

Spring is definitely coming. Signs are starting to show. 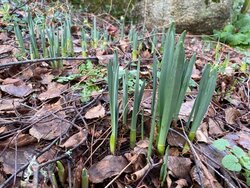 Expand Signature
PE Alderlea T6, Jotul F602
The most important tool in the wood burning process and the largest variable is the one that is running the stove.
F

begreen what kind of lettuce are you growing? any pics
Expand Signature
vermont castings defiant 1
hearthstone 2

All of our seed orders have been filled. Started ordering in November as seeds for 2021 became available. Baker Creek seeds is reporting they have 5x the business this January over last January and at one point they shutdown to be able to catch up. Point being it might be a good idea to place your orders sooner rather than later if you haven't already.
Expand Signature
Lennox C160
Husky 455 (x2)
Fiskers x27
Reactions: begreen

I ordered and received mine too.
Expand Signature
Matt
Pacific Energy T5, Englander 30, and CFM 240007

I don’t know what I’m doing wrong. Nothing will even germinate for me. 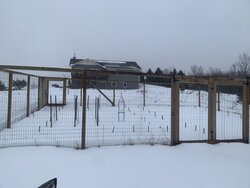 Lol. I got basil to germinate in my kitchen window. Probably wouldn't care for all the snow that fell today.
Expand Signature
Matt
Pacific Energy T5, Englander 30, and CFM 240007

EatenByLimestone said:
A good day of work that will pay off for years!
Click to expand...

That's what I was telling myself when I was spending time protecting our young citrus (five trees of various sorts) and young olives (three trees) when we had a hard freeze predicted. We're right on the line for hardiness for these, but we figure that if we can get them through their young and tender years, they'll have a better chance of survival (and they'll be too big for us to protect anyway). We have hope because of the large, established mandarin that came with our house. There was thick frost on the coverings the next morning, but the plants looked good when I uncovered them a day later.

@Eureka, I love that picture of your garden. I envy your nice fence and your snow.

@Riff, that was a good heads up about seeds. I had ordered most of mine in November as well, but some things I wanted just weren't available at that time, so it was a good reminder to get those last items taken care of. I actually just this week started seeds inside for things like broccoli, cauliflower, Chinese cabbage, and Swiss chard. I need to get a couple rounds of cool-weather crops in so that I can free up my lights for the heat lovers later on.

@begreen, how tall did that Early Girl end up growing? How many tomatoes do you suppose you got over the season? It sounds quite impressive.
Expand Signature
Current home: Enviro Kodiak 1700 Insert

fbelec said:
begreen what kind of lettuce are you growing? any pics
Click to expand...

Green and red salad bowl and a mix that we have been growing for the past couple years. 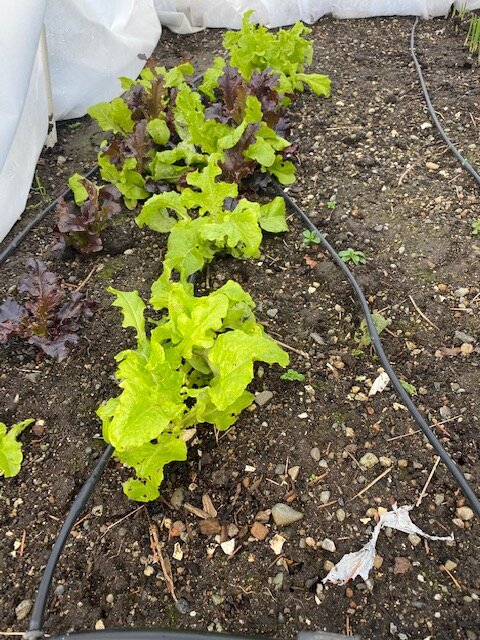 It's time to start another row.

The January King cabbage is getting ready to pick too! 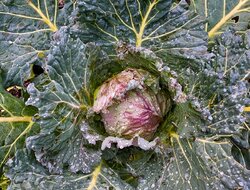 Last edited: Jan 18, 2021
Expand Signature
PE Alderlea T6, Jotul F602
The most important tool in the wood burning process and the largest variable is the one that is running the stove.
Reactions: fbelec
You must log in or register to reply here.