An update on a Jetstream

No pictures yet but will add from phone eventually. I've had Jetstream serial number 380 for something like 16 years now sitting assembled waiting to be installed.

Over Christmas decided to tackle the job, so:
-Drug assembled boiler through 100 ft of shop and junk, slid it off its pallet onto bricks. This sucker was heavy.
-Install a side venting chimney as the original straight back original setup doesn't work in the space.
-Procured a different milk tank with flat open top to install coils. Its on its third life after use in a nearby maple sugar shack.
-Clean out 16 years of junk from boiler room
-Drag 1500 lb milk tank through a dirt floor lean to, up a step through a set of doors with 1/2" clearance, into boiler room and move into back corner
-Plumbed in a finned copper heat exchanger, find out its no good, so soldered up a new finned copper heat exchanger with 5 x 20 ft coils.
-Wired controls etc

Into the house:
-Fought to get PEX lines fished through the pipes we left in the slab.
-Tied in the loops we had previously split to shorten the runs. All routed to a centre spot now.
-Built pump manifold and mixing station in house.
-Built mixing station at tank


Still to do:
-Arrange house lines at the tank
-Instrumentation
-Insulate tank lids
-Tie in to hot water heater for domestic
-Punch myself in face for putting this off so long. Even the dozen or so test burns are amazing. 40" logs vs 16 years of tiny 15" wood in our stove.

The general arrangement is:
-Boiler is only connected to the heating coils, they are pressurized, straight water.
-Over temp shut off on the draft fan is set to 210 F at the moment. At current pressure could run hotter.
-High mass boiler with dual aqua stat so no other low water temperature return protection as the circulator shuts off.
-Unpressurized tank, water from the top is taken and mixed down to 140 F and pumped to the house.
-140 F passes through domestic coil
-140 F is mixed down to 80-85 F for the floor loops
-Cold return discharges to the bottom of the tank with a diffuser

Overall thought after all the messing around:
-Pressurized propane tanks option much better approach. My tank was cheap but the copper and hx building time not worth it. Mine barely thermosiphons with the coils in air (much colder than they will be with the tank full), where I'd bet with the vertical tanks and the bushing removed for 2" lines the propane tanks could have skipped a circulator.
-If you're pouring a slab, put more conduit under the slab than you would ever guess you would need. Use proper long sweep elbows.
-Build boiler room as detached. The wood gas smell occasionally gets out while loading etc and no one is happy about that.

A selection of random photos. The previous piping with the hot water coil hx that was garbage so replumbed without (cut open to find the burst coils), some part finished pics etc. Will get some updated pics soon. Bonus points if you spot the recycled sharkbite fitting. I’ve never used one before but all the pipe on this job is salvaged and one had that fitting. 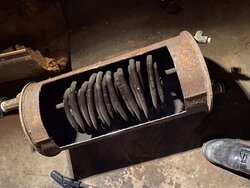 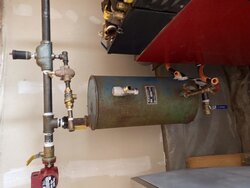 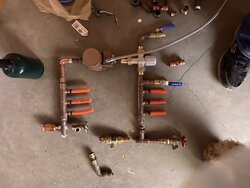 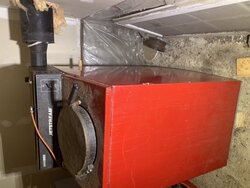 Before anyone gets too excited about the far from WETT temp chimney, its a 7” single wall pipe inside an 8” old style Selkirk Class A with the 1” mineral wool packing. The highest stack temp I’ve seen yet was 250 F or so and it can’t develop creosote deposits and still function. Have’t even melted the snow off the top of the Selkirk section outside despite lots of testing.
You must log in or register to reply here.

Help with heating DHW as well as air