We have a large (36x36) gable vent fan installed in our walk-up attic. It was part of a whole-house fan setup whereby a timer switch (kind of like what you see on jetted tubs) in the upstairs hallway controlled both an electrically operated louver in the hallway ceiling and the fan. When you turn the timer on the louvers open and the fan (located on the other side of the house) starts up, pulling air from the house, up into the attic, and out the gable vent. The previous owner lived here for 20 years with that being the only summer climate control. We've since installed mini-splits as the whole house function is nice, but only on days when the humidity is low, which is hardly ever. Right now I have the louver covered with a fitted 2x2 sheet of plywood that is meant to seal it up in the wintertime. I've been running the fan to try to keep the attic cool since I figure it reduces the heat load on the 2nd floor some. In theory even though the hallway ceiling is sealed up, the draw created by the gable vent fan should be pulling in fresh air through the soffits which are the standard perforated vinyl type. Each rafter bay has the little styrofoam lunch tray-looking things which keep the insulation from blocking the airflow from the soffits. There are also two passive roof vents similar to these installed: 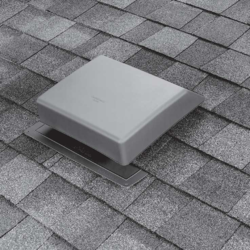 So is it a good idea to run the roof fan in the summer to take some load off of the AC? If so, I will remove the electrically actuated louver, patch the hole, insulate the void and permanently install plywood overtop. I would also look into eliminating the manual control altogether and install some kind of thermostatic control to kick the fan on anytime the attic rises about 90°F.

We had this setup in our house in NY where I grew up, with no AC. It was quite effective, especially at pulling nighttime cool air through the house. Why not leave the louvers operational to pull air across the attic?
Last edited: Jul 21, 2020
Expand Signature
PE Alderlea T6, Jotul F602
The most important tool in the wood burning process and the largest variable is the one that is running the stove.
D

Here are three good places to start your reading on attic venting: 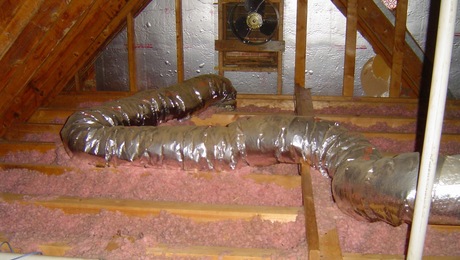 Despite how fervently some people believe in them, powered attic ventilators don’t pass building science muster 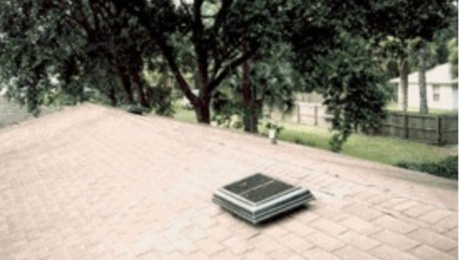 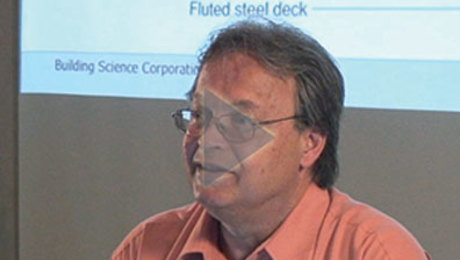 You need an airtight ceiling, lots of air flow, plenty of soffit vents, and deep insulation at the attic perimeter

I just ran across one of these in a house my buddy was renting that was built in the 50’s. The previous owner used it religiously, and they were quite common before ac. I was impressed at the air flow when he turned that thing on, you could feel air moving through the entire house. I don’t see how moving air through a 120 degree attic could be a bad thing. In fact, I would imagine just the opposite. His attic did not have any known problems, and like I said, the previous owners used it often.
Expand Signature
Regency i2400 Insert

Swamp_Yankee said:
Right now I have the louver covered with a fitted 2x2 sheet of plywood that is meant to seal it up in the wintertime. I've been running the fan to try to keep the attic cool since I figure it reduces the heat load on the 2nd floor some
Click to expand...

brenndatomu said:
Can the fan get enough air with the louver covered? Losing 4 square feet of intake is huge...a 36" fan probably requires 8-10 sq ft of intake area...
Click to expand...

Good point. We had a screened window at the opposite end of the attic and large ceiling vent. It was my duty in spring and fall to walk the ceiling joists and open/close the window and uncover/cover the ceiling vent.
Expand Signature
PE Alderlea T6, Jotul F602
The most important tool in the wood burning process and the largest variable is the one that is running the stove.

A bit late to this thread, but I have been told the following - when I was living in TN. I have no knowledge of whole house fans, i.e. fans that suck air out of the home into the attic (and out of it). AC was ruling the day there....

Instead, I am talking about attic fans meant to cool the attic, and not doing so with air from the conditioned space.

I was told in TN that to have a decent life of your roofing shingles, they should not be getting too hot. Therefore, either soffit vents plus a ridge vent, powered ("ufo") vent near the top, or gable vents are needed.

The idea is to pull air from the soffits, have it convect up below the plywood and exit at the top. (Hence the food tray things.) This cools the roof, and removes most of the heat from the attic space.

The motor of the fan should be dimensioned to the air intake area (soffits) to not have it run too hot and die prematurely. It appears having a big whole house fan would not be good with the soffit intakes.

Having gable vents and a powered vent near the top won't create flow near the ceiling and only cools the upper part: intake at the bottom, exit at the top.

The passive roof vents may be positioned too high to function as intake for (top of gable) exhaust points.

If you have soffit vents, either choose to only use passive vents if they are located near the ridge or with a Tstat powered fan near the ridge. Most "green" is soffit vents and a ridge vent. No power needed, let physics do it's job thru convection.
Expand Signature
DutchWest FA264CCL -> BK Chinook 30.2 + 27' heavy double liner in exterior masonry

Science is facts; just as houses are made of stones, so is
science made of facts. But a pile of stones is not a house,
and a collection of facts is not necessarily science.
-- Henri Poincare

Most building scientists look on these things with suspicion in a hot humid climate....as you mentioned, not super useful in the mid-atlantic area summers these days.

They also scorn attic fans. Most studies have shown that attic fans increase AC usage (by sucking conditioned air from the house into the attic). As for shingle longevity....they don't do much to lower the temp of a shingle baking under direct sun....which can cool to the open air above it (often with a little wind), rather than through the sheathing to the space below.

I'd rip the thing out the next time you have you roof redone.
Expand Signature
40 yo no-name coal stove Coming in 2021: FPX Large Flush
burning up to 1.8 cu ft of wood
25' interior chimney

Let's agree to disagree.
I personally spent 6 weekends in my two attics and can guarantee that a better sealed attic floor does not exist. (Internal walls, outside walls, all fixtures, and even the access panels to the attics).

I did check the vent input surface area required for the fan, and ascertained that my soffits provide 1.35 times as much area. And I dimensioned the exhaust fan according to the attic area (as in roof area as that is where the heat load originates) - it was in fact hard to find a fan small enough for my attic as almost all are way too large.

Finally, cooling the bottom of the roof decking will (physics after all) decrease the heat load, even radiant, onto my ceilings. (Which, btw, I insulated myself after sealing, to R57 (adding R38 bats and assuming the original R19 was still performing as R19, an unlikely scenario)).

I do agree that in a poorly sealed system and a poorly dimensioned fan it may cost more in cooling because of sucking air from the conditioned spaces.
That is not the case here.

The warranty on my roof system in fact required a venting system (though that did not need to be a powered one - unfortunately my ridge was too short for a ridge vent of sufficient venting area).

....and after all this I provided additional shade on my roof by having solar panels installed about 3" above the new shingles, providing shade and convection on the outside..... should have thought more carefully about that...
Expand Signature
DutchWest FA264CCL -> BK Chinook 30.2 + 27' heavy double liner in exterior masonry

Science is facts; just as houses are made of stones, so is
science made of facts. But a pile of stones is not a house,
and a collection of facts is not necessarily science.
-- Henri Poincare

You've clearly given this some thought, and we are clearly kindred souls for having spent many weekends in our attics DIY airsealing and upinsulating our leaky old attics.

While you are correct about the physics, I still have to tell you that quantitative modeling and empirical work shows a miniscule change in shingle temps (the U-value to the air above is waaaay smaller than the U-value to the air below). Moreover, the heat flux is so large that the cfm of typical attic fans hardly drops the attic temps that much at all. There is no evidence that a change of something like 1°F or less in shingle temps during high sun hours extends shingle lifetime.

Attics do need to be vented, and shingle manufacturers require that. But this is for humidity/condensation reasons, not bc of temp reduction. The bottom line is that shingles are engineered to hold up at shingle temps....but the roofing cos don't want the sheathing rotting out under them.

And if your attic is airsealed, insulated and vented, you don't need to worry about thermal gain (or radiant cooling) up there. If you can't do ridge vents, gable vents will do just fine. The venting specification is conservative, and assumed that the attic floor is NOT properly airsealed. You've got lots of margin.

Three years ago I wrote an article titled, Don’t Let Your Attic Suck - Power Attic Ventilators Are a Bad Idea. Nearly a hundred thousand page views and 93 comments later, it's still generating lots of heat. I don't know why so many people are so defensive about power attic ventilators, but here...

Yup. they are banned in Georgia, per their newest energy code.

A couple of months ago, I wrote about why you don't want power attic ventilators in your home. Whenever I've written about this topic, it just seems to set some people off. I get comments like, "You really should do more research before you post blogs like this," and, "You don't know what you...

What a great discussion and one of the reasons I hang out here - a civil exchange of information that benefits anyone bothering to read it or the resources cited.
Bravo!
Expand Signature
Andy
Jotul Oslo 500, Rika Integra II, Brave splitter, Nissan Leaf, Solar PV, Ground-source heat pump, fixer-upper house with a few acres and garden; dogs; cat, sons, and a very tolerant wife.

“If there are no dogs in Heaven, then when I die I want to go where they went.” – Will Rogers
Reactions: stoveliker
You must log in or register to reply here.