Hello all and thanks in advance. I’m in the process of installing a new pacific energy alderlea T4. I’m putting it on a 12 inch hearth And a rock surround. (12 foot wall behind the stove will be all rock, 9.5 inches of the front of the hearth will be rock plus a 2” hearthstone)
This hearth sits in slightly off center in a living room. There is a door wall next to where the stove will sit- on the other side of that door wall (same wall as stove) is the dinning area.
Hope that all makes sense. I uploaded a pic if that helps. (Pretty much that whole back wall will be stone (from a little past the edge of that hearth up) That piece of cardboard is the tv and there is a built in faux mantle going under the tv- I built it into the wall to give me that extra 3.5 inches. My DVD player, etc will go in there. It will look like a wood mantel but the front will be a hinged door to give access to the electronics)

so my question; because you will be able to see the back of the stove while in the dinning area / kitchen I’m not in love with plugging in the blower to the back wall. I’m really trying to keep this clean and a black cord running from the stove to the wall is not a clean look! (Not to mention the plug in the stone wall isn’t the easiest to make look right)
What are my options?

I was thinking of putting plug on the hearth, facing up. Not ideal and I still have a wad of cord back there. Not sure how close I can put a plug on the floor like that?
I was also thinking of running a piece of metal conduit up from the floor close to the rear leg of the stove. I’m on a raised foundation so I could easily run the conduit under the house to a junction box or plug. Id need to cut off the end of the plug from the blower so might just be easier to run into into a J box. (Could just put a switch on that too- I could kill power to the fan with a switch, dedicated breaker or just put a new plug on and plug it in under the house) The fan has its own controls so I’d rarely need to cut power to it.

Im I overlooking any other options? Any reasons I cant run the conduit?
It would pass through 2” concrete hearthstone, .5 inch hardibacker (could cut back the plywood under the hb) then through an open 9 inch raised hearth pedestal and through the subfloor- could cut that back too and run it through sheet metal so it’s not touching the subfloor) 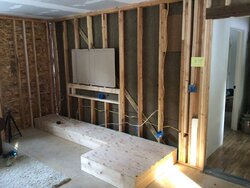 No one has any experience with wiring up a blower fan?
Toggle signature
Pacific Energy Alderlea T4 (house)
Lopi Liberty (shop)

I to would put the outlet in the floor. I would put it on a switch. The fan control needs to be turned off and on. And no need to get to the control on the stove. There is wire we use to wire high voltage circuits that need to survive during a fire. We call it "fire wire". Just extreme high temp insulation. The fan control should have this type wire.
Toggle signature
Tom

If you are putting the outlet in the floor use a proper floor outlet box to keep crap out of it.
Toggle signature
Regency 3100 in basement
cawley lemay 600 sold
member of pa guild of professional sweeps
You must log in or register to reply here.

A
Running electrical for blower unit

The Hearth Room - Wood Stoves and Fireplaces Oct 20, 2021
Aquaelvis
A
D
Is my chimney suitable for a BK Princess?