Added a Fireboard monitoring system to the boiler inside the basement today. This is awesome and allows me to monitor remotely. I have alarms set up for overheating and low temps.

Interesting. What is the cost for a system like that?
Expand Signature
Installing HeatMaster wood boilers in VA. Burning a GS100. 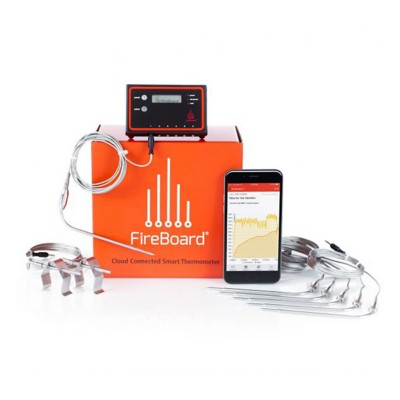 FireBoard® is a Cloud Connected Smart Thermometer, designed for remote monitoring in both hot and cold environments. Easy to setup and inst SCHEELS

Not bad for the piece of mind. Another $25 for pipe insulation and aluminum tape.

This is the graph of all 6 probes at once.

That link says comes with 8 probes. But only has 6 channels? Is that right? And how long are the probe wires? And also looks like it runs off rechargable batteries? A plug into 120v would be good too.
Expand Signature
Varmebaronen UB 40 with 660 gallons of pressurized storage - first fire 10/08/2012.
(Replaces a Benjamin CC500 - history after 17 years.)
No fans for me - all natural.

That link says comes with 8 probes. But only has 6 channels? Is that right? And how long are the probe wires? And also looks like it runs off rechargable batteries? A plug into 120v would be good too.
Click to expand...

Plugs into a micro USB charger. I have the two extra probes for the Pellet Grill lol.
Probes are a good three feet long.
R

I hadn't been on Hearth for a while - summer, you know, but I got an email ad from Scheels, pumping a sale with the Fireboard. I thought this BBQ item might be really great for monitoring my furnace/DHW setup, so I thought I'd check Hearth to see if anybody else had the same idea. Sure enough! So I ordered one.

It's Friday night, and I have time. I unpack it and try to use it. I checked the system requirements on their website before I ordered it. They list an I Phone 4 something or newer, running IOS 8 or better as the minimum. I try to download the app in the Apple store, and it won't install. It says it requires IOS 11. My older phone, that actually fits on my belt and does way more than I need a phone to do, doesn't support IOS 11 even though it's a 5 version running IOS 10x.

They don't seem to have a website hosted option, that would work with just about anything - it looks like it's app only.

Searching the Fireboard site yields nothing useful, and the support is mostly a knowledge base without useful knowledge. No interactive support is offered. I found a phone number, but of course by now it's after hours on a Friday in Kansas, so leave a message.

This might be a good product, and there might be an app hidden somewhere that will work, but I suspect that it's another case of the geeks making super cool stuff, and they're so busy doing that they can't possibly be bothered to update the documentation to match, so us non-geeks can buy the appropriate thing and actually use it. How many times have I finally gotten a geek to talk to me and it's all about how great this thing they've made does all these great things I have no need for, and if I only upgrade everything I own, back to about or including the electric meter, I can actually use it to do the basic thing I needed done, it said it would do, and I bought it for??

I'm not actually a total Luddite. I have a computer controlled Kuuma downstairs keeping my butt from freezing, But, I am really tired of the tech march that outruns the instructions, if there even are instructions (Apple)!
.
Ok - tech frustration rant off! This might be a good thing, but if you're not totally up to date, and prefer running perfectly good devices to waiting on a cold sidewalk overnight to have the next great thing before everybody else, you might have a problem with it.

I'm looking forward to being wrong, and being mostly satisfied with this thing next week, if I can get hold of someone. It would sure be nice if there was a way to get it to work as it was represented, when I need it to, and without tech support phone tag. I'll post and edit as appropriate. Just wanted y'all to know, and to get some frustration off my chest.
Expand Signature
Kuuma VF100 - Great!
Englander 24-ACD - Some issues.
Some kinda fireplace / stove thing. - Pretty, but inefficient.
R

I had intended to edit down my previous post, and replace ramblings with facts once I knew them, but I guess I can't edit it now. If a mod wants to remove the post above, please do - it'll save some reading.

I was unable to download the app for my older iphone on IOS 10. In case there's another person on the planet who believes a phone is good as long as the battery lasts, here's some info.

I heard from my Friday evening email to Fireboard support on Monday morning, so they're responsive. There was little info but that the iphone app now requires IOS 11, and they would remove the outdated requirements info from their knowledge base.

After borrowing my wife's Ipad, and installing the apple app, all went smoothly with activation.

Once activated, the Android version app in the emulator on the pc seems to work perfectly well. So far, it looks like it's only weakness is the missing bluetooth connection that would be needed to manage any changes to the wifi settings.

One of the many things they don't tell you is: The dashboard and features you use to monitor the info are available on your account on their website in near real time. The app is not needed to view the information. Theoretically, that solves my old iphone problem, since I should be able to use my browser to view the info. However, for some mysterious reason, I'm unable to log into my account on their website using Safari. I tried multiple devices. My PC browsers work without a hitch. Maybe putting FireFox on the phone and using it is the answer, but I can't see how that would work better than Safari. So, I might try calling their support this time.

It's my first evening with the thing functional. So far, it looks like a solid device, with a lot of great features. The documentation is a bit lacking. They don't even do a great job of selling all of it's abilities in the marketing materials. And, for as long as these have been around, there also isn't a lot of useful knowledge in the knowledge base.

If I can find a way to make it work on an old phone, I'll let you know.
Expand Signature
Kuuma VF100 - Great!
Englander 24-ACD - Some issues.
Some kinda fireplace / stove thing. - Pretty, but inefficient.
R

Medic 21 -
Are you aware of any limit on the amount of data that can be stored in the cloud account?
I've just been letting my Fireboard roll continuously, and it seems like there's usually some gotcha. I can't find anything in the documentation, and I kinda hate to ask a question of the company that might cause a problem that doesn't yet exist.
Expand Signature
Kuuma VF100 - Great!
Englander 24-ACD - Some issues.
Some kinda fireplace / stove thing. - Pretty, but inefficient.

RockyMtnGriz said:
Medic 21 -
Are you aware of any limit on the amount of data that can be stored in the cloud account?
I've just been letting my Fireboard roll continuously, and it seems like there's usually some gotcha. I can't find anything in the documentation, and I kinda hate to ask a question of the company that might cause a problem that doesn't yet exist.
Click to expand...

Not that I know of.
R

Thanks! I guess I'll just let it keep rolling and see what happens.
Expand Signature
Kuuma VF100 - Great!
Englander 24-ACD - Some issues.
Some kinda fireplace / stove thing. - Pretty, but inefficient.
You must log in or register to reply here.