Humor: Quadrafire Expedition II was looking a little plain, so I added some bling from an earlier Grand Voyageur.

I was up several times a night wondering what was missing. I found this from an earlier model, it happened the least costly was from an Aussie model, Grand Voyageur, I believe. I shopped around for the best price, about a hundred dollars last season, after perusing downloads of several parts manuals from earlier, more flamboyant eras in wood heat. The appearance is fairly common like the ACC control, but the unneeded attached mechanism was quite heavy duty and well constructed. Sadly there was some cutting and welding, drilling, tapping and grinding needed, but the results were well worth the effort.
I am no longer up several times a night wondering what it was missing. Of course, I always leave the knob in the up position, as moving it would impede air flow, and that would not be in the spirit of our benevolent leaders. I would not recommend anyone else try it, but if they do, the complex mechanism should be removed to prevent uninitiated users from misusing the mechanism and corrupting our planet. I thought others may appreciate my one of a kind customization efforts.. I am a car guy and subscribe to Hot Rod Magazine.
For the interior, beautiful soapstone fire brick from a Green Mountain 70 lent colorful accent to the interior.

I am much happier with the change from my 40 year old hydrohearth hydronic heat exchanger to an air to air insert now. 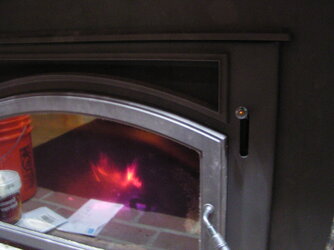 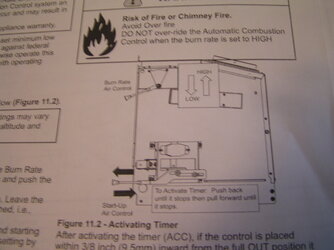 Let's say that I have the same insert and I feel like it looks a little plain as well. Wanted to add the same bling to it. How involved is this exactly?
Toggle signature
Quadrafire Expedition II
Northstar 30 ton splitter
Stihl MS261
Z

The diagram on the right shows the position I used to mount the control valve. After removing the outer panel then the inner cover manifold which feeds air into the upper air pipes, I mounted the air control in the position shown. The control rod will need a slot in the front plate. I determined the interference with the inner manifold cover, and had to fab a substantial notch in the lower right of the control valve assembly for clearance, as the fit is not the same on the Expedition. All that is needed after the valve is installed is another slot in the front panel assembly. The control rod will need a short extension. I used an aluminum barrel found in the hardware store bins, cut off and tapped through. Unfortunately quadrafire parts are very expensive. I bought the valve a year ago for a little more than $100 and it hurt to cut it up. I used SRV7075-005 burn rate control assembly VoyageurGrand AU as it was the cheapest I could find . Now it is as expensive as candidates from other models. After my submission here I checked and the price is approaching $300. It is well made heavy and precise, but I think I would build one from scratch next time.
The soapstone took almost a year to show up but only required a few bricks to be cut with a table saw. Steady even heat and the Klixon blower switch works better, longer cycle.
Next project is replacing the ridiculous andirons and sockets with 2 plates with half of a pipe coupling stub each welded in the center. I will fit 3/4' black pipe street ells and a bushing drilled to 5/8" for startup air nozzles. I may revise that air feed lower with more, smaller holes if needed. I will retain only the upper row of original startup air feed holes. The lower rows block with ash easily and dealer tech (condescendingly) told me I should remove the drilled cover plate and vacuum out the ash WEEKLY. Do not lose that plate however, as they consider it part of the firebox and not available for purchase!
Reactions: vbu
You must log in or register to reply here.