Hello, joined up just to pass along some of our complicated experience with our 2020 Intrepid Flexburn. Apologies if this should have been tagged to another thread, but these comments apply to topics on several different discussions. First, this is our 2nd catalytic Intrepid and these were both installed in a reworked fireplace . We removed extended hearth, removed fireplace damper and lined proper-height masonry chimney with a 6" solid stainless steel liner . Later added a directional (wind-vane) chimney cap to try to improve draft. We still have a larger flexible oval pipe section (with cleanout at bottom) to connect stove outlet (horizontal) to chimney that probably causes some eddies in the exhaust flow and a simple 6" elbow would probably be better.

We did not insulate around the SS liner but did a load of work here to make a safe, proper fireplace conversion (photo) and this worked fine with our previous Intrepid.

Our problems with this new stove have been mostly around draft; I feel that to provide enough suction to pull draft all around the passages of this design will require a very strong draft compared to other stoves. Our old Intrepid worked fine, with little smoke escaping when loading through the top, and we were able to open the doors and use screen without smoke coming into the room; old screen fits the new stove, BTW, but not enough draft to burn with doors open and VC doesn't recommend that.

This is our 5th VC stove and we are big fans. This model is the only one short enough for fireplace installation with top loading and is just fine for our 1,500 SF house with fairly open plan; we heat about 60% with wood in our 7,000 degree-day climate. The Midnight finish (a powder coating rather than porcelain) is excellent and no chipping worries. So we want to make this install work well.

We worked with the customer service and tech folks at Hearth & Home Technologies (parent company) for months to try to improve things as well as offering some suggestions for changes in design and operating instructions. One thing that did reduce draft was a poorly fitting flue collar casting and we were sent a new one under warranty. Any leaks in flue will reduce draft reaching the stove.

Took the plenum apart in rear to verify that air shutter was working right, vacuumed a little ash in there. A second shutter opens when you close damper to provide more air through the combustion path.

I find the catalyst needs cleaning often and the little holes in back of firebox as well, all much easier than pulling the catalyst in previous stoves. The other accessible passages in stove are cleaned by vacuuming maybe twice a year. I still do not understand how air flows INTO the firebox and am concerned that some blockage there contributes to the insufficient draft problem--how does air get into the ash pan area?

We added the mentioned directional chimney cap for most pull up there, considered adding a section of chimney pipe but height specs are good now and would rather not have another couple feet of pipe in the air, which would be cold and so condensing smoke most quickly. The stove works a little better without catalyst, but I wanted the cat for: 1)less wood used 2)less pollution and 3)less stuff collecting in chimney.

Otherwise I have considered connecting outside air intake, which is made easy by the plenum connection at rear. Anyone have experience with before and after outside air intake?? Our house is getting tighter with weatherization work and providing combustion air is probably never a bad idea, esp with tighter houses and furnaces which are not sealed combustion. 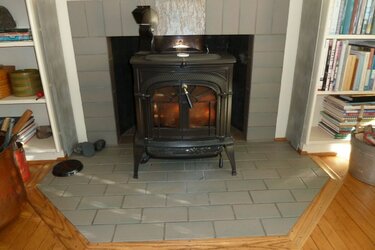 You must log in or register to reply here.

A
2021 Vermont Casting Intrepid Flexburn: Looking for experience with, opinions of, and advice about

Is this unused thimble a problem?