New-to-me 242xp doesn't get oil to the chain

I've got the wood bug...pretty bad. Got a wood stove about a year ago and I'm always looks for 'volunteers' (standing dead trees) that I can get. Any time a neighbor needs a tree taken down I jump at the chance - they think I'm crazy. I've got a bunch of mauls and a few home ownery chainsaws (Rancher 455, 2 x Stihl MS 250s, and an Echo top handle saw). I'd been watching Craigslist like a hawk for a while hoping to score a good deal on a pro grade saw. A 1993 Husqvarna 242xp showed up and I pounced on it.

I haven't done much cutting with it, but the little I've done there is definitely a serious lack of oil making its way to the chain. There's a decent amount of oil mucking up everything inside the clutch cover - it just doesn't get to the chain. I've tried 2 different chains, cleaned the bar groove and oiler hole and flipped the bar over.

It appears the oil is going behind the thin sheet metal plate and oozing out underneath it in lots of different directions - and hardly anything makes it to the chain. The bar groove and oil hole get wood gunk in them after a couple of cuts - I wouldn't say they're clogged, just gunked up a bit than what I'd consider normal.

The bar and chain get very hot after a few minutes of cutting and the teeth on the chain get the nasty brown scorched color - its too hot to touch. I can't feel any oil on the chain after it cools down.

When I set it down right after a few test cuts a little pool of oil will form on the ground, and sometimes chunks of oil soaked sawdust falls out. When I take it apart there is a lot of oil all over the clutch cover and the body of the saw.

Is there anything that I can do to make the oil actually go through the groove and make it into the bar and chain and NOT go behind the thin piece of sheet metal? I something else happening? Am I missing something?

Any help would be greatly appreciated. I'm dying to go cut up anything I can find with my new old saw!

Yes. The oiler slot lines up with the hole in the bar. It's got a Husqvarna bar on it that appears to be original.
Toggle signature
Stihl MS250c, 026 Pro, Echo 355T,
Husqvarna 242xp, 455 Rancher, 359
Obviously lots of mauls
Buncha hatchets, A few axes

If you run it with the bar and cover removed, not at full speed but with enough throttle that the clutch engages and spins the drum, does oil pump steadily out of the slot?

Oil is pumping - and there's a lot of excess oil oozing from a lot of places under the clutch cover when I run it. Every time I do a test (trying different bar orientation, different chain, etc) I clean it all really thoroughly.

Its got an adjustable oiler, and its not turned up all the way. I intentionally turned it down a bit because there was soooo much oil oozing out of the clutch cover and not making it to the chain.

Where the oil hole comes out of the crankcase there is a triangular shaped groove that is acting like a little oil reservoir under the sheet metal piece. Do all/other saws have that design? Is that possibly causing the oil to divert down instead of onto the bar? All my other saws have the little rubber hose with the gasket on the end that seem to provide a better seal up against the bar.
Toggle signature
Stihl MS250c, 026 Pro, Echo 355T,
Husqvarna 242xp, 455 Rancher, 359
Obviously lots of mauls
Buncha hatchets, A few axes

Jon1270 - good suggestion. I'll check it out more thoroughly and see if I can find leaks from deeper into its guts.

I was hoping it'd be something simpler than that - like its missing a little rubber gasket at the opening or something that I wouldn't know about without having experience with the saw.
Last edited: May 25, 2016
Toggle signature
Stihl MS250c, 026 Pro, Echo 355T,
Husqvarna 242xp, 455 Rancher, 359
Obviously lots of mauls
Buncha hatchets, A few axes

Don't know about anyone else, but I typically enlarge the oil ports on the bars and also add a leader groove to them to positively ensure that oil makes its way into the bar groove. Also when ever you change a chain or are done for the day clean the bar grooves out . You will amazed at how much crud is packed in there. There likely is a tool for this ,but you can file down a flat bladed screwdriver to accomplish this task easily.
Toggle signature
Dolmar 116SI Dolmar 7900(2) Dolmar 112 Dolmar 6400
Various length bars for above
HF 30 ton splitter modified HF 4 ton electric splitter ( kindling)
10 yr old stove w/secondary NC30 stove Hotblast furnace
3/4 and 1 ton ford pickups Bearcat 20hp chipper
NH LX485 skid steer,bucket ,forks, grapple
Motorized wheel barrow.
Reactions: dougand3

Sean McGillicuddy said:
I use this most of the time.
View attachment 179004
Click to expand...

Does appear to be a bit of damage on the shield, possibly from a derailment. Which may also have lead to some warpage.

It looks to me like it may be the wrong plate, the oil slot in plate is not lined up with the oil port in the case. try filing the slot in the plate and see if it helps.
Toggle signature
"If I can't fix it, I can screw it up so bad no else can either!"

I took it apart yesterday evening - removed the clutch, oil pump, hoses, everything. There was so much gunk behind the oiler housing that I think it was causing problems for the pressure fittings from the housing to the rubber pieces.

Other than being filthy everything looked like it was in good shape. The rubber hose was still flexible and had no cracks.

I was pretty impressed with the nice heavy brass filter on the hose, and it was surprisingly clean. 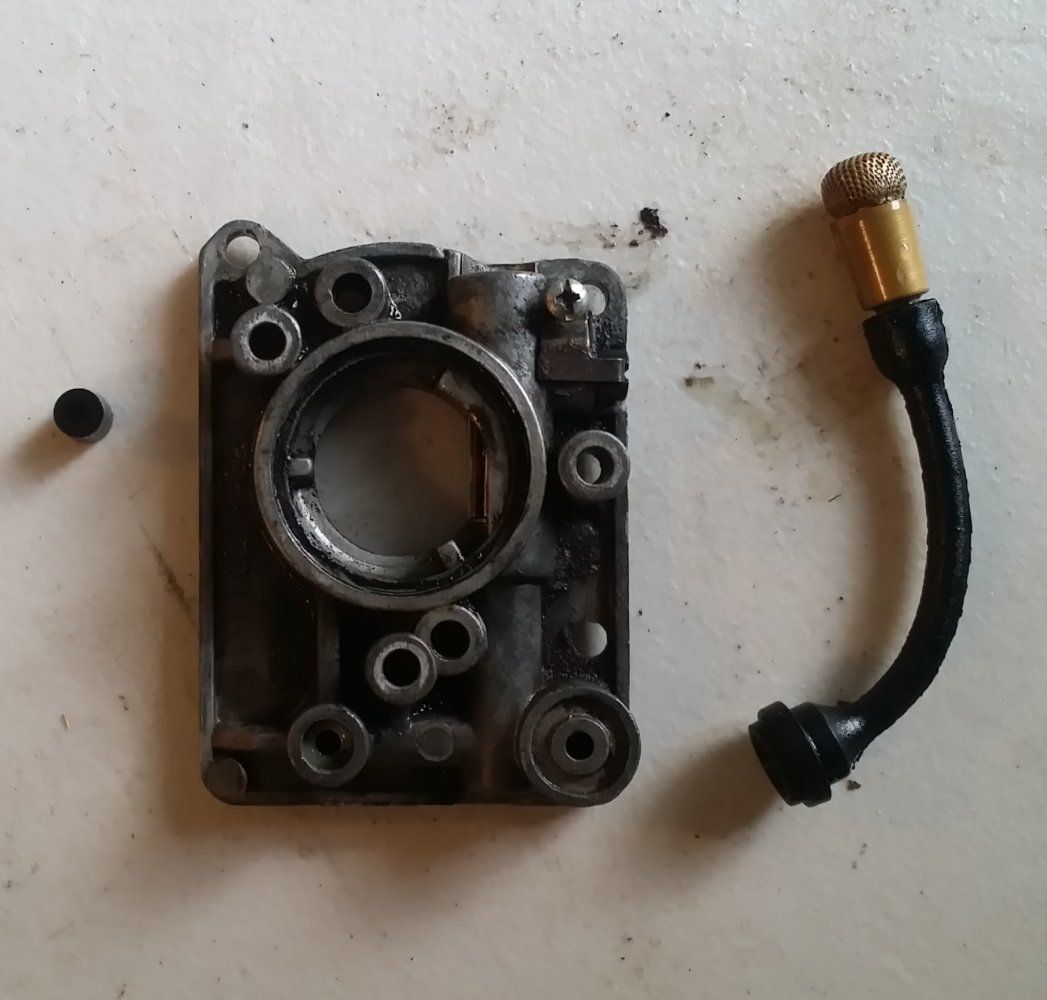 I'm reasonably sure that all the metal plate and bar are the right ones and that nothing is damaged or in need of replacement. I'm concerned about filing down the metal plate because I think it would allow even more oil to ooze down and not go into the bar. The slot in the plate lines up perfectly with the slot in the casing, but they are different shapes - which seems weird to me.

Before I start filing or modifying anything in going to make sure I can get replacement parts. They're apparently hard to find for this saw

I put it all back together and ran it a bit this morning. With the bar, chain, and metal plate off oil only comes out of the proper spot - and a decent amount comes out. There was no oozing from anyplace else - I checked it 3 times.

When I put the bar, chain and metal plate back on and run it the bar throws a lot of incredibly clean oil. But also, there appears to be a bit of oil that isn't making it onto the bar and is oozing out from under the metal plate. I think it then goes into the gap between the casing and the oiler mechanism 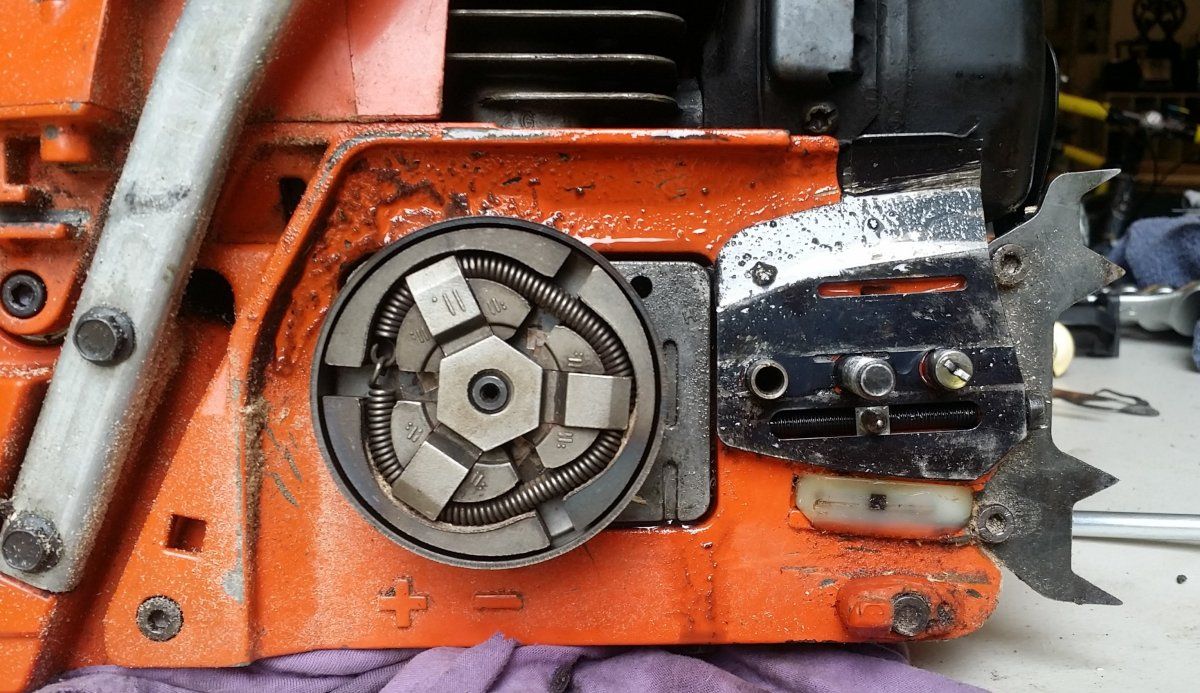 This picture was taken after I first put it back together. I cut a tiny branch with it to make sure the clutch was on tight - and you can clearly see the oil and sawdust that is in the top left. For the most part, oil was only where you'd expect to find it as a result of it flinging off the chain. With the exception of the drip running down from the lower right part of the oiler. There was also a decent amount of oil under the metal plate.

I did the test runs 3 times (only cutting wood the very first one) and all three results look the same. Each time the chain was flinging a lot of oil - something it didn't do before. Its raining a lot here today (Raleigh NC) so I can't go cut some real wood with it to see how it performs.

Here's some thoughts on some of the other responses and ideas that were posted (BTW, I really appreciate all the input). The bar is cosmetically hysterically bad - its clearly had a hard life - but from a functional point of view I'd say its fine. Its also not blue from being heated up, so I'm guessing the oiler issue hasn't been too bad for long, or it hasn't really cut any big wood and was used for limbing (which is why I intend to do with it).

I'd rather not replace the bar if its functional - I'd hate to waste a functional (but ugly) bar and the money on a new one unless its totally necessary.

I think my next step is going to be to make a very small gasket / dam out of RTV or some other gasket that I find lying around and put it between the metal plate and the casing below the oiler slot. Hopefully that would keep the oil from oozing all over the place. If that doesn't work, I'll try filing the metal plate so the oiler slot matches the somewhat odd semi-triangular shape of the oiler slot in the engine casing.

Is there anything else I should consider?
Toggle signature
Stihl MS250c, 026 Pro, Echo 355T,
Husqvarna 242xp, 455 Rancher, 359
Obviously lots of mauls
Buncha hatchets, A few axes

MaulMan said:
Is there anything else I should consider?
Click to expand...

If it keeps leaking, I would take the clutch off, pull the oil lines, thoroughly clean all oil off of that whole area with paper towels, reassemble it, run it for a couple seconds, then disassemble it again (sorry) and look for leaked oil whereever the rubber tubing meets a fitting of any kind (tank to feed tube, feed tube to oil pump, oil pump to discharge tube). Those fittings and the lines between them (plus the pump itself) would be my first suspects for an internal oil leak. Could just be a flared, hardened-at-the-end bit of tubing.

Tale of woe part one