Got this in the mail finally after one popped up on ebay! Since I can not get Bob to sign it since hes passed, I think im going to need to send it too Coaly for an autograph! 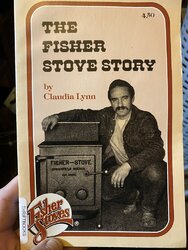 Frankdozer said:
Is Coaly a Fisher
Click to expand...

He is not, just as far as I can tell he is the foremost expert of Fishers in the US. And everyone I know who loves fishers, knows of Coaly ha
Expand Signature
Kingdom Wood Stoves
Vintage Wood Stove Repair and Restoration
Reactions: PA Mountain Man
C

Maybe someone could Photo Shop Coaly next to Bob on the pamphlet
Reactions: Deranged Hermit

There was actually a photo of me posing with a Papa Bear the same as Bob on the cover, I believe in reverse. The stove pictured on the cover is a lefty, mine is a right hand door with right side vent. If I find it, I'll scan it and post.
I'm better with a torch than a computer program.
Do your worst; 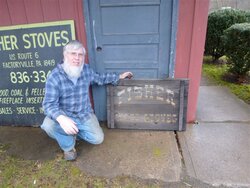 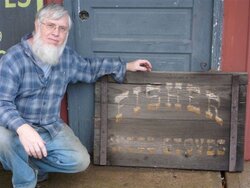 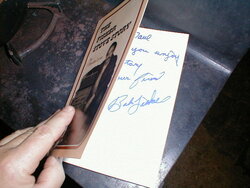 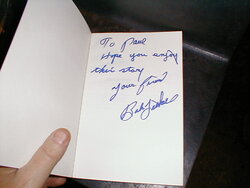 Expand Signature
Fisher Stoves An idea America is warming up to.

I came across this photo one day and realized it was close to a mirror image of the photo shoot for the cover! 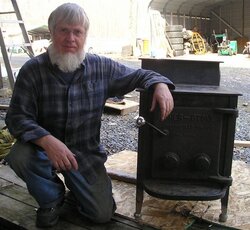 I'd show more, but I seem to have the same clothes on for the next couple years. hmmm 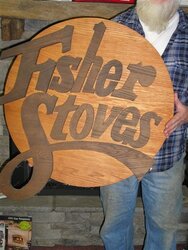 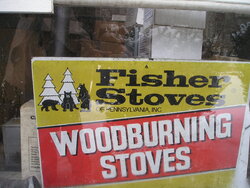 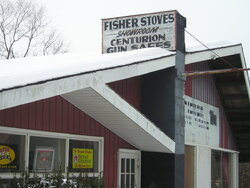 Expand Signature
Fisher Stoves An idea America is warming up to.

Those are awesome shots Coaly! How much cool fisher advirtising did you get from that shop
closing up?
Expand Signature
Kingdom Wood Stoves
Vintage Wood Stove Repair and Restoration
Reactions: PA Mountain Man

Everything stayed in the building since the business owner there was selling stoves up until a couple years ago. They were still doing business as "Fisher Stoves Factory Showroom" until they closed about 2 years ago. Those pics were taken years ago. The #1 stove built there is now at his home as well. The same building owner still owns the building. It was rented to the Moore's originally as the welding shop in the back and showroom out front. Then the manager back when I bought my first stove there took over the business and continued to rent it. It is now a bait and tackle shop that the owner runs seasonally and lives in Florida for the winter. Across the street is a large metal building that became the Centurion Safe fabrication shop and the safes were sold at the Fisher Showroom as well, a part of the Fisher Century Inc. business. They are now the number one selling gun and home safe in America known as Liberty, still using the Centurion brand name. So, in a way Fisher Century lives on with the same lifetime warranty as long as the company exists.

There was a miniature model of the doors and how they latched on the counter, and we couldn't find it closing up. That would have been neat to have. I have enough to set up at least one Fisher Showroom, including the stoves, brochures and manuals. Some items include the Ganz teddy bear in my avatar that was given with the purchase of a Teddy Bear, a nice cast iron Fisher trivet that is rarely found anymore, the original stove shop sign, one that lights up from a Canadian dealer, "Ad slicks" that I framed, drinking glasses, hats, match books, brass buckles that were sold, and a bronze dealer belt buckle. A few posters, and the original wooden blocks carved for print presses in newspaper ads. A few 8 x 10 glossy original pictures that were used in the ads, window decals, and a set of "hang tags" that were used on the stoves in the showroom. Some items courtesy of Camfan, as well as original prints. Other collectables from eBay, and a bunch of parts from the Colorado fabricator that sold all their left over parts at auction.
Here is what was hung on the stove handles in the showroom so everyone knew what model they were looking at. Specs are on the other side; 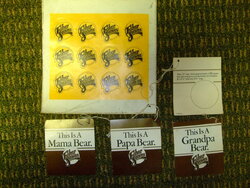 This was the poster on the bathroom door. 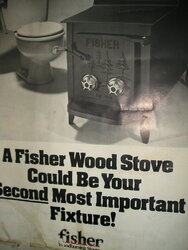 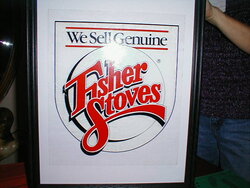 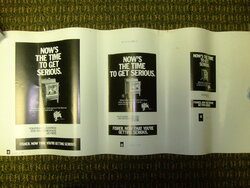 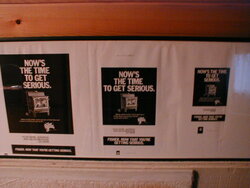 The things I won't post like bankruptcy papers, internal memos, price sheets, and original drawings are protected from sellers making copies and selling as originals, as well as some personal family pictures.
Expand Signature
Fisher Stoves An idea America is warming up to.

Wow! Those are an absolutely amazing collection! My favorite by far is the “a Fisher wood stove could be your SECOND most important fixture” I hope thats framed on your wall, they just dont advertise that well anymore!
Expand Signature
Kingdom Wood Stoves
Vintage Wood Stove Repair and Restoration

There really must not be anyone in the countey with a more complete Fisher collection. You should open a show room, Id love to road trip and check it out!
Expand Signature
Kingdom Wood Stoves
Vintage Wood Stove Repair and Restoration
C

That's a neat collection and it is nice to have a collection with something you respect and love especially the history of it that I know you know by heart...Good for you....I love those stoves something about them and I cannot quite put my finger on it maybe the history or just the slick way they did their advertisement way back when....lol I wonder who has that gate that locked like a stove and i hope someday it is found and I just bet it is a heavy piece--neat...Its still around...somewhere....lol clancey..
C 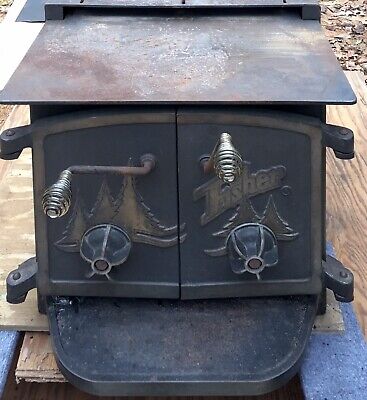 So funny story. True story. My ebay alert was still active for the book. And my phone went off this evening with this. I paid $40 for the other copy. And the signature and inscription look pretty spot on too Coalys example. For 60 I took the chance, how could I not?

lol I would say that you are still deranged and still collecting--good for you--go get em...clancey
Reactions: Deranged Hermit
You must log in or register to reply here.