Show Us Your Wood Shed

Building it was very easy. 6 ft long ground timbers as the posts and 2x4's as the dividers and to hold the wood up in the back. The ground timbers are put into 6x6/4x4 concrete deck blocks from Menards and its all held together with 3" long wood nails:

Built this lil guy with the kids out of some free pallets from work. $0 invested, holds 2 cord, can pick up and move with skidsteer(when empty). 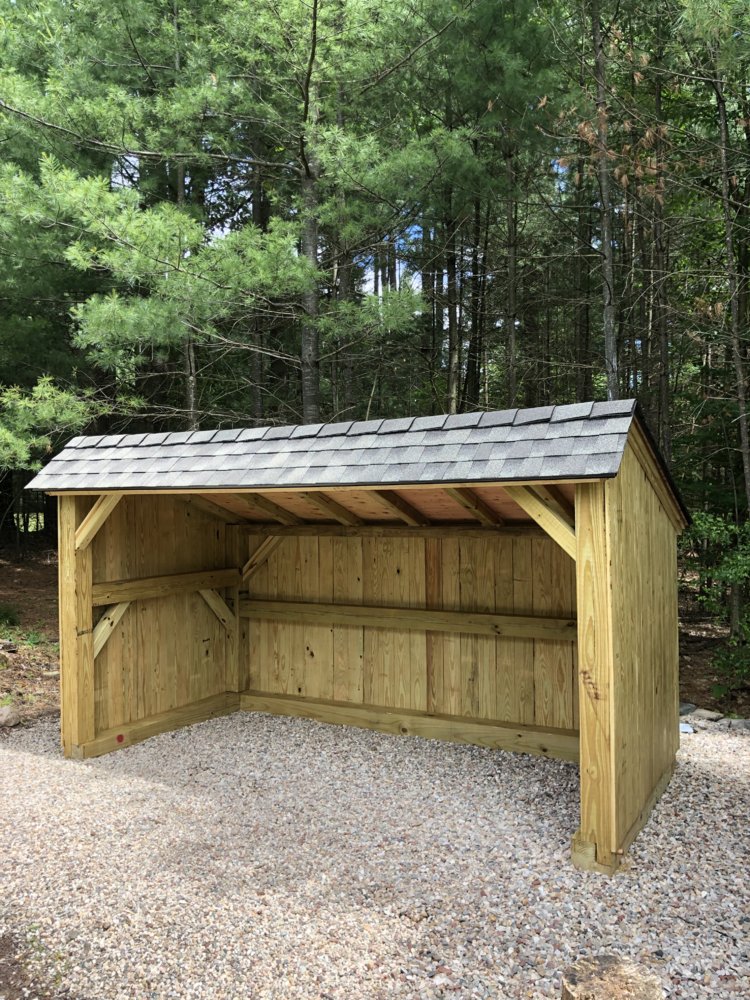 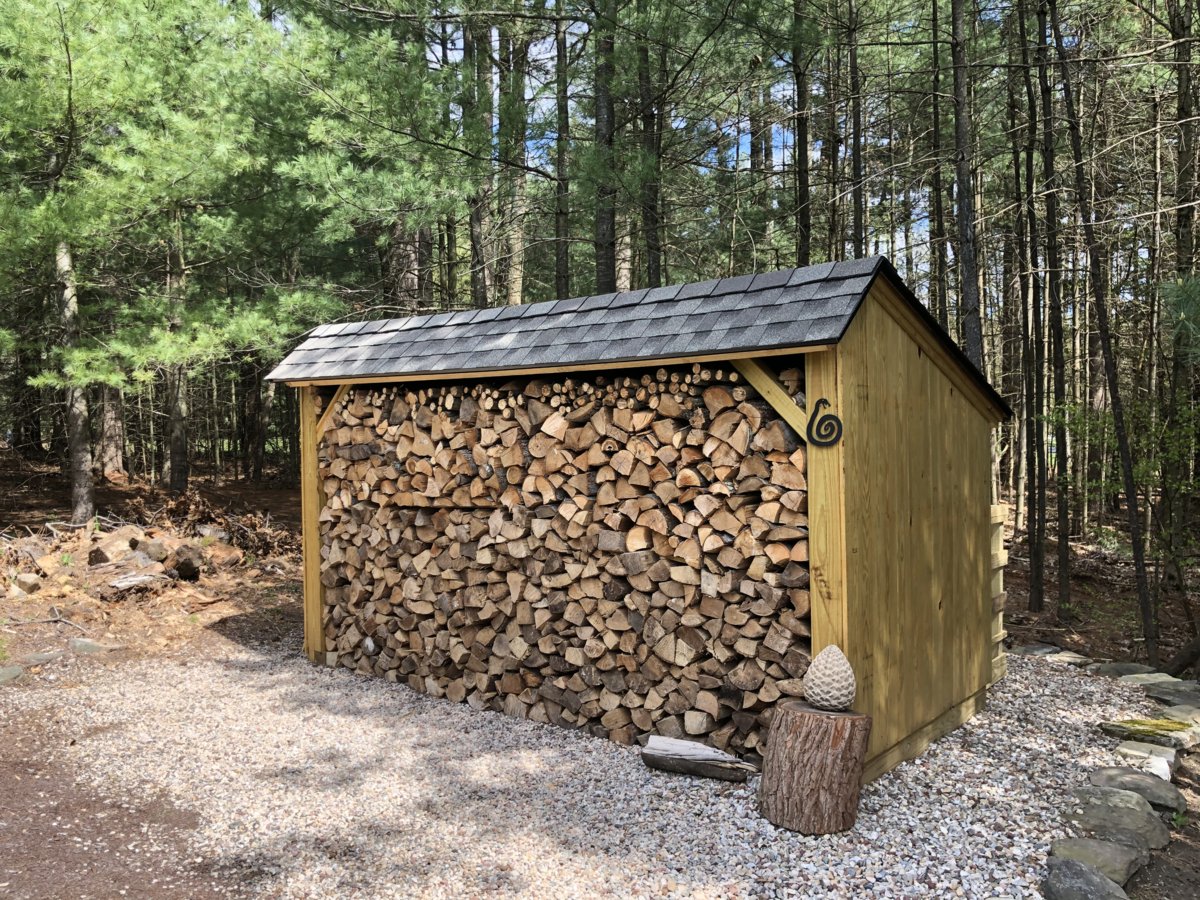 Glad to see someone started a new woodshed sticky thread.

Here's my shed I just built a month or two ago. Holds about 5 cords. 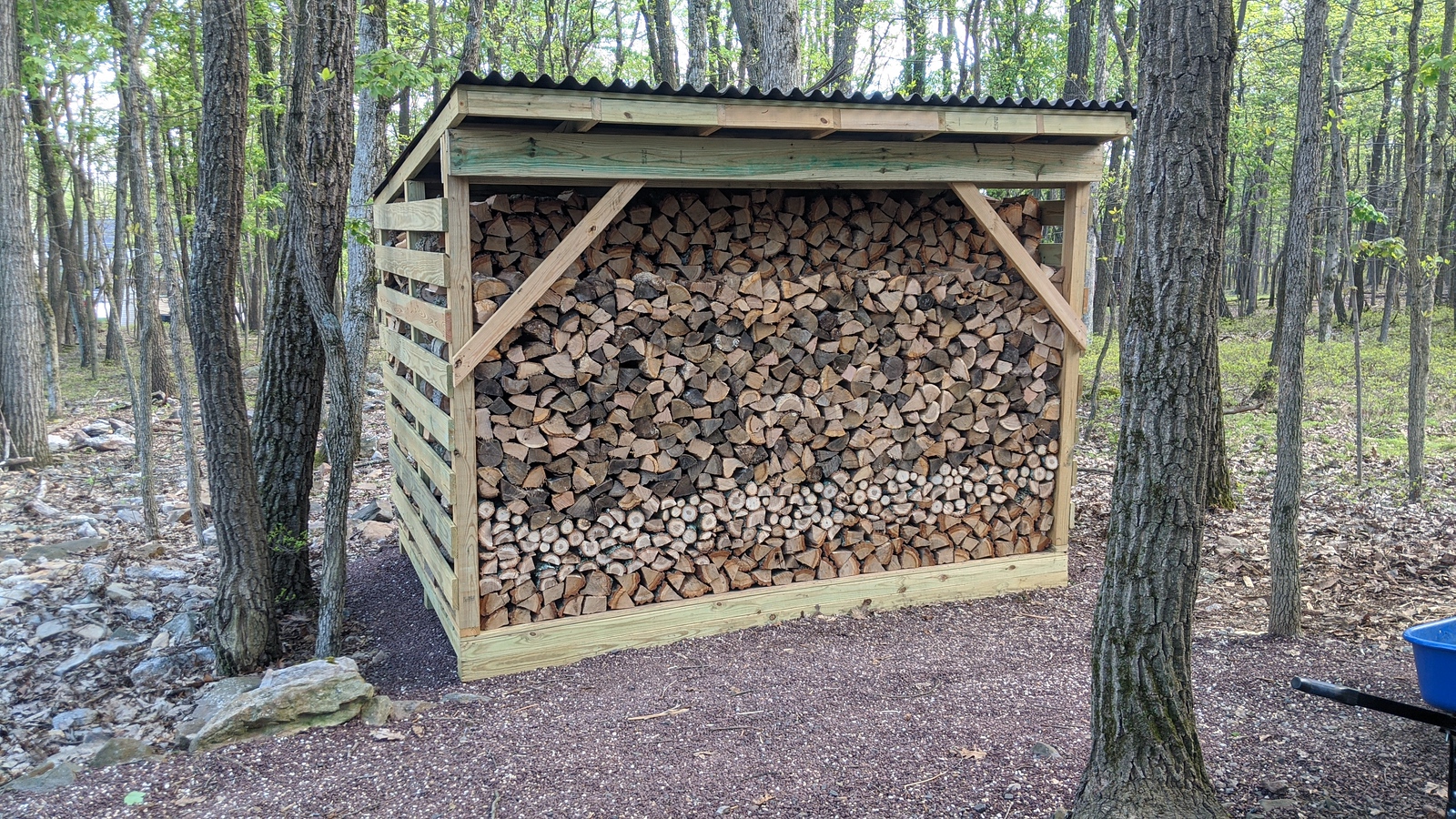 Here's my new wood shed, though shed is a stretch. This is fresh cut wood ready to dry over the next 2 years. I will cover it in the fall and winter. Got feedback on the forum that in Iowa it will dry well in our hot windy summer days, uncovered. 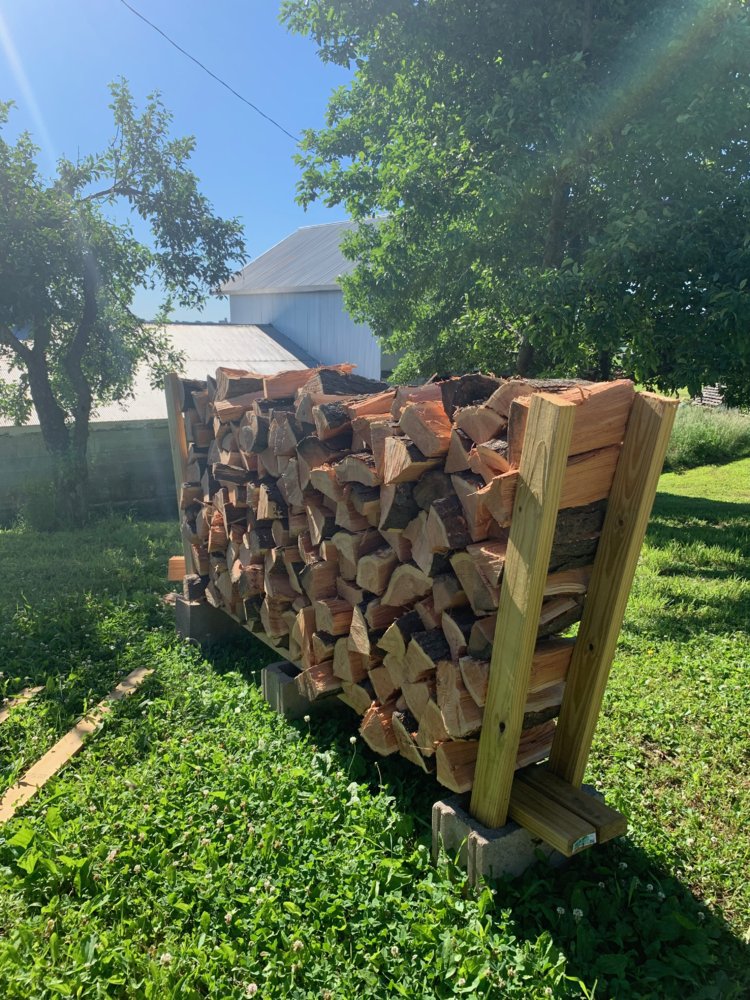 planning to build a shade next week, thanks for the nice ideas
A

can i use aluminum to build the shed ? because it's lighter and easier to build.

I would think you could use any material you want. Just needs to be strong enough and have adequate airflow. I have plans to build one out of steel pallet racking.
Expand Signature
T2 (load and go temp control)
Century 2900 insert
Good Ol Vermont Vigilant retired
Drolet Myriad II
LS XJ2025H
No name splitter
X27
more Stihls than hands
A

Nice sheds thanks for sharing pics, actually i want to build a shed but i still looking for modern design ideas, i moved to Australia few months ago for working here, and i bought a big home in Melbourne but i was surprised that it doesn’t has a garage for the car or shed in backyard and i had to build them, i started with the concrete base for shed and searched in internet for shed and garage models, as a new here i didn’t know any steel and wood companies so i asked the neighbours and them told me about localshedsolutions.com.au so i ordered aluminum for the garage and wood for shed, i like your shed designs i might build like it with some modifications.
Last edited: Aug 9, 2020
Reactions: jerryswope

Topped up the shed today. Should be just enough to get me through a mild winter (based on my last stove... new one might be a bit more thrifty). If it's a cold one I'll pull from outdoor stacks.

I didn't get a floor poured in it like I was hoping to this summer, nor the rear lean-to to park trailers under. Decided to add batten to the boards though, as the wood gets enough air with the front and rear doors open that I don't need the siding ventilating. Also closed off the soffits with vented aluminum and got a final coat of paint on the roll up doors. 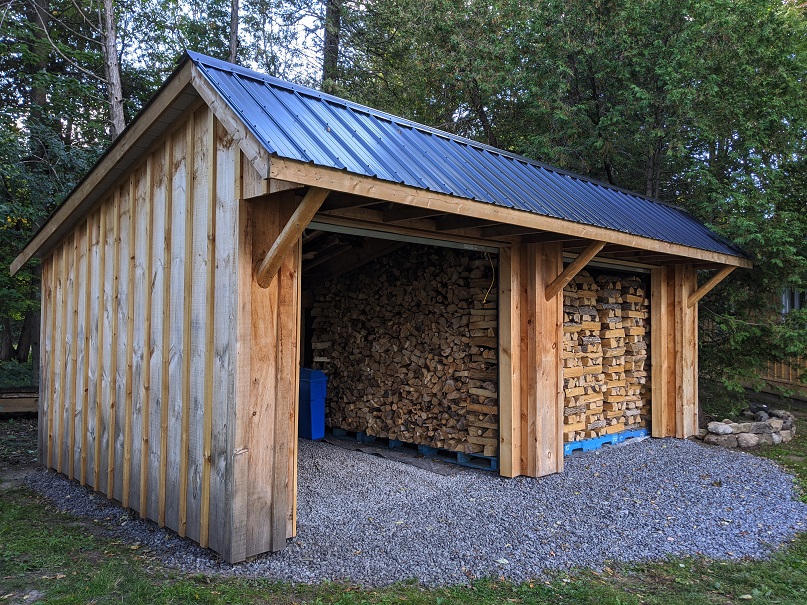 Geez longknife, feel a little inadequate with mine...
Modified from plans I found on EPAs website: https://www.epa.gov/burnwise/burn-wise-how-build-wood-shed 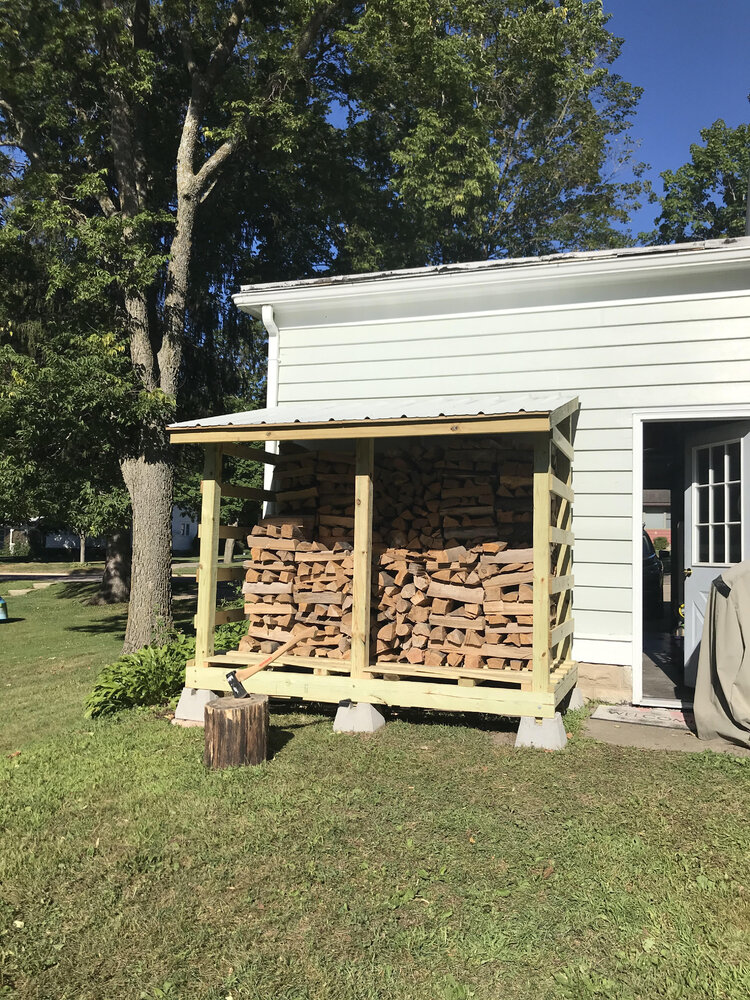 Version 1 was last year. MUCH better than dealing with tarps, although it did partially collapse under a heavy snow wet snow load. Version 2.0 features the ridgepole and elevated frame.

It's almost empty in this picture. It's about half full now. More wood on the way! 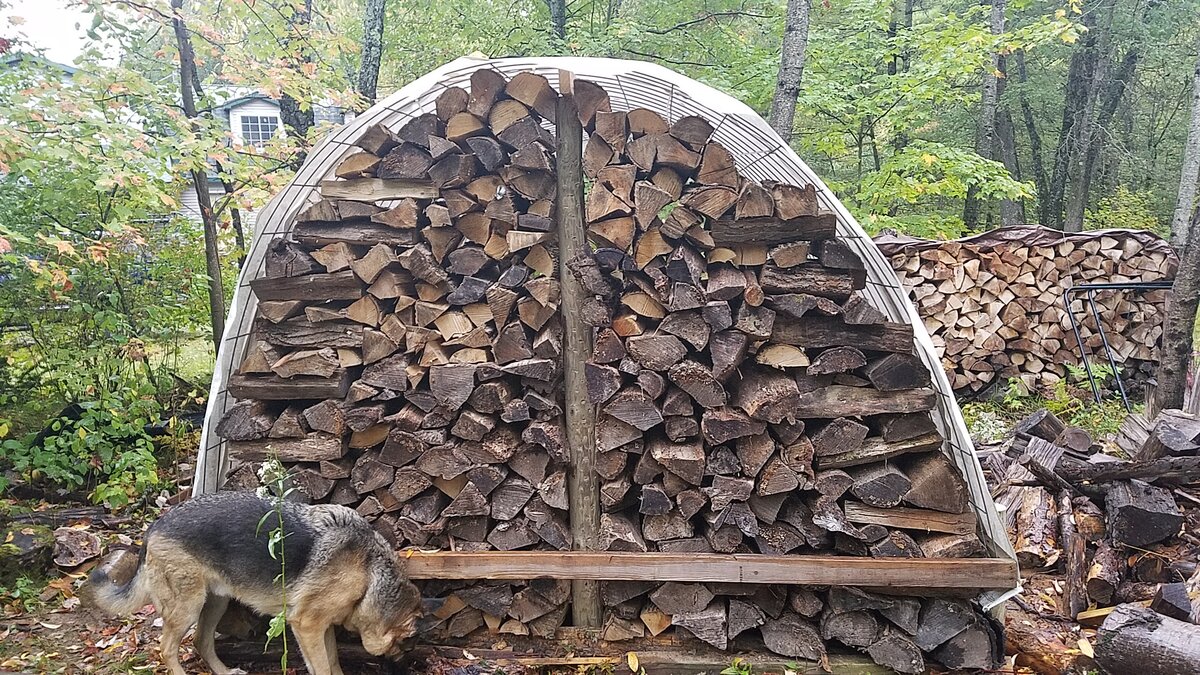 Are you referring to the green cart in my picture? I couldn't have told you the brand, LOL. It's worked out real well. My boys use it to haul wood up to the house almost every day until theres enough snow to use the jet sled. I've pulled it with the lawn mower once. The boys have also used it to haul all manner of fort-building supplies all over our 20 acres. It's also been to scout camp.

It has turned out to be a very useful purchase.
Expand Signature
Ford 8n
PoulanPro 295
Fiskars Super Splitter
PE Summitt - installed fall 2013
B

Here’s my project. Sea can and a lean to for firewood. Never built one before, but it will do. 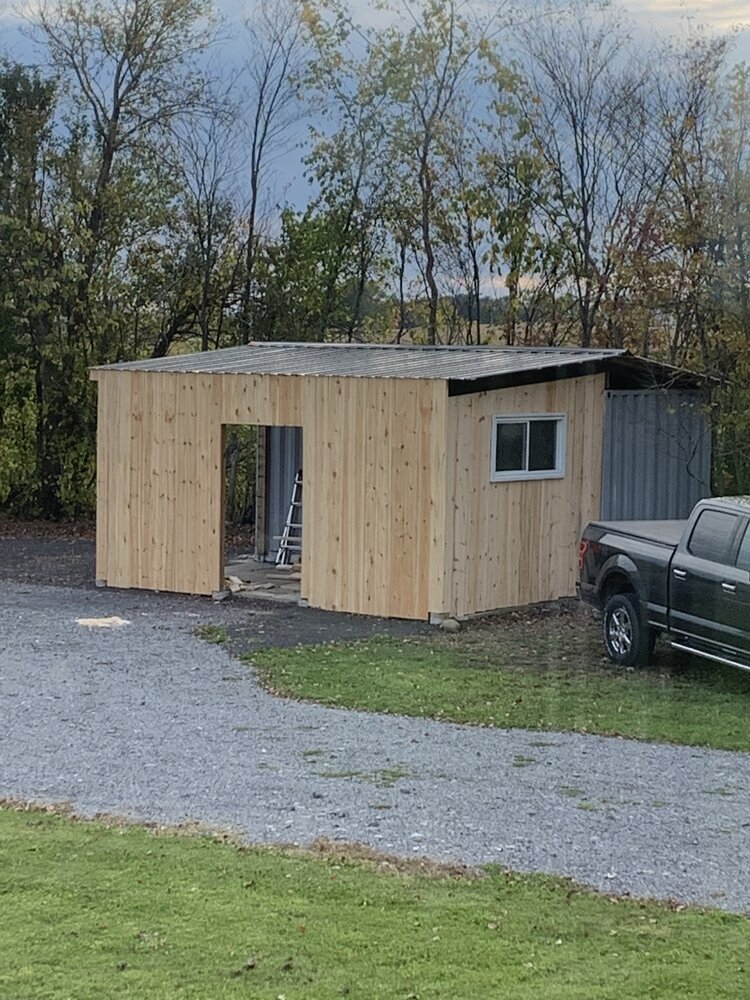 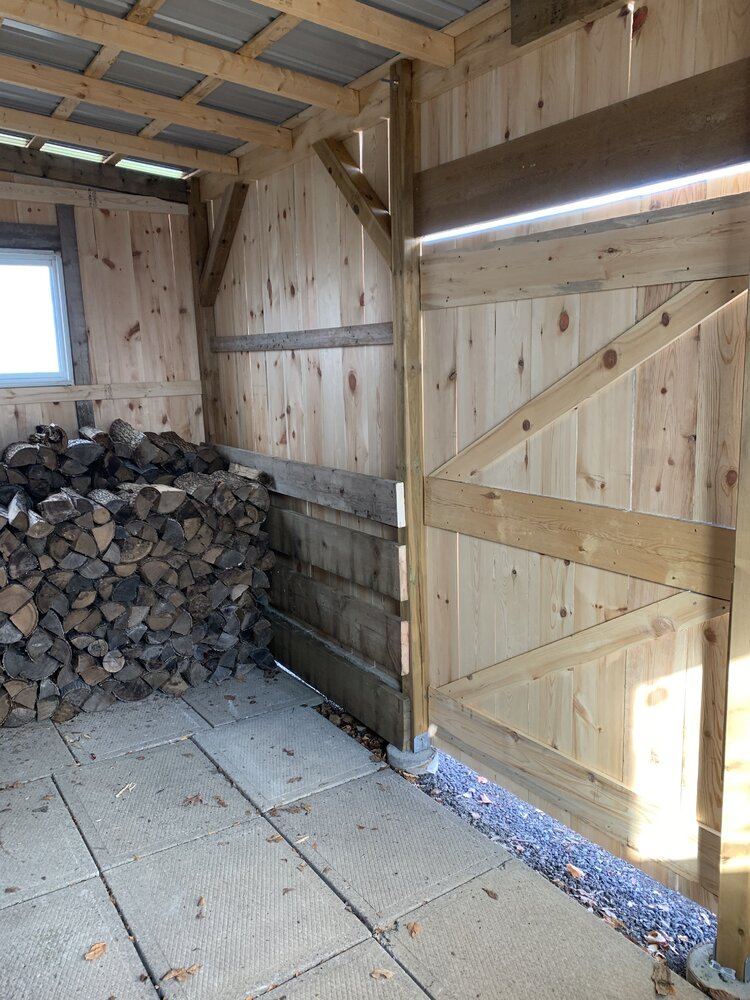 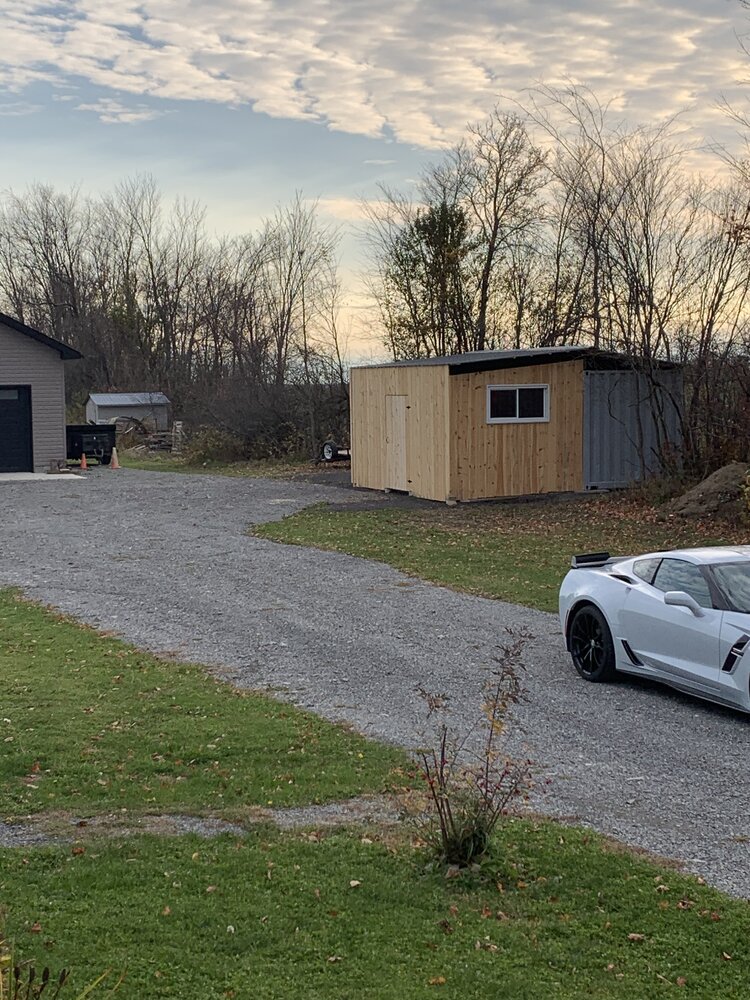 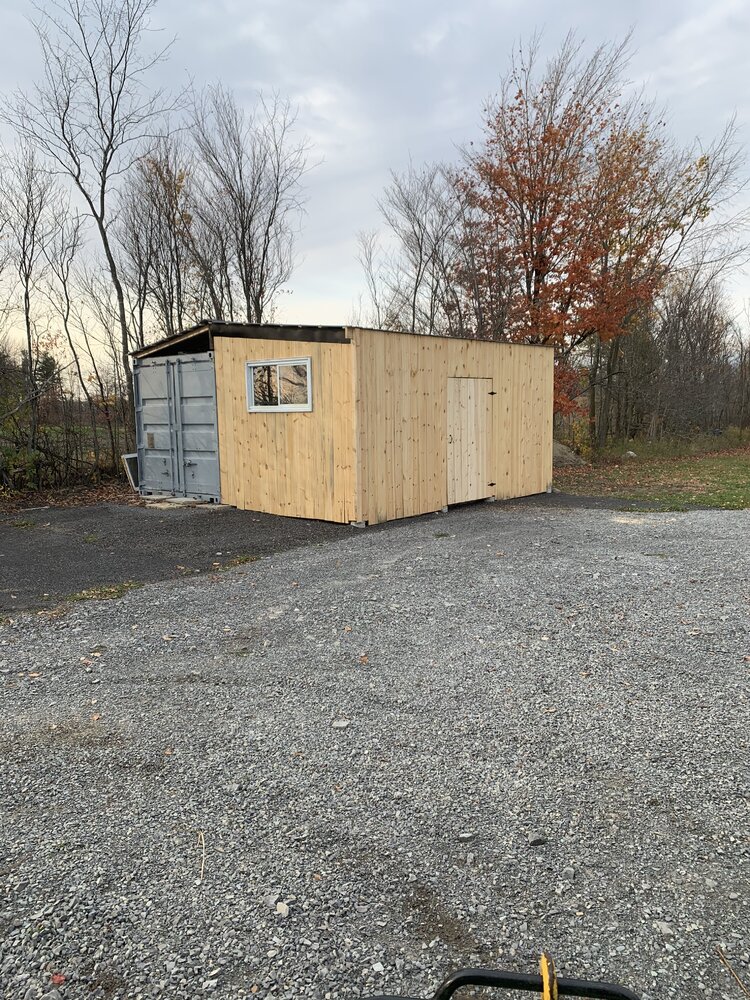 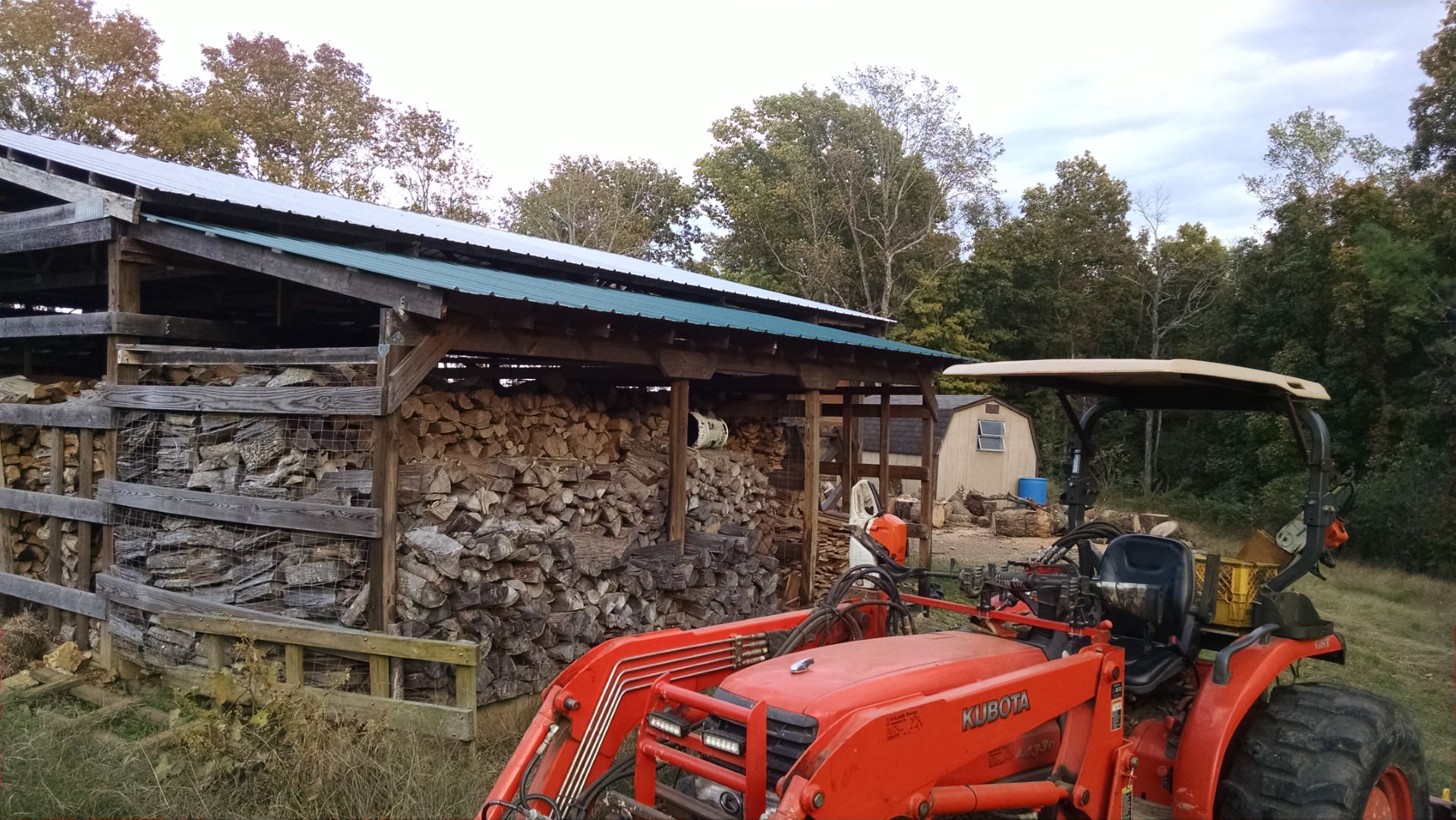 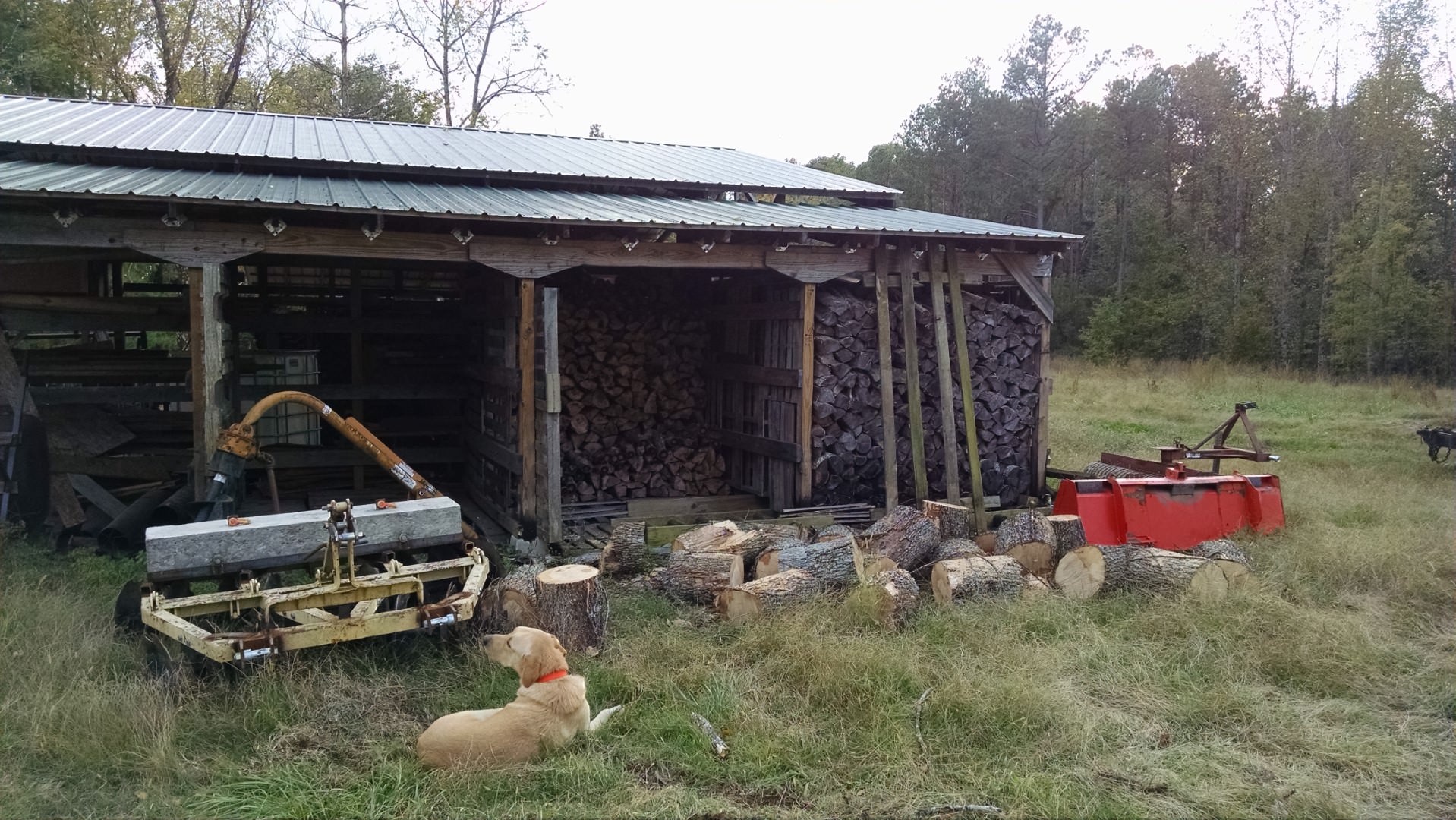 Pole barn in the middle: 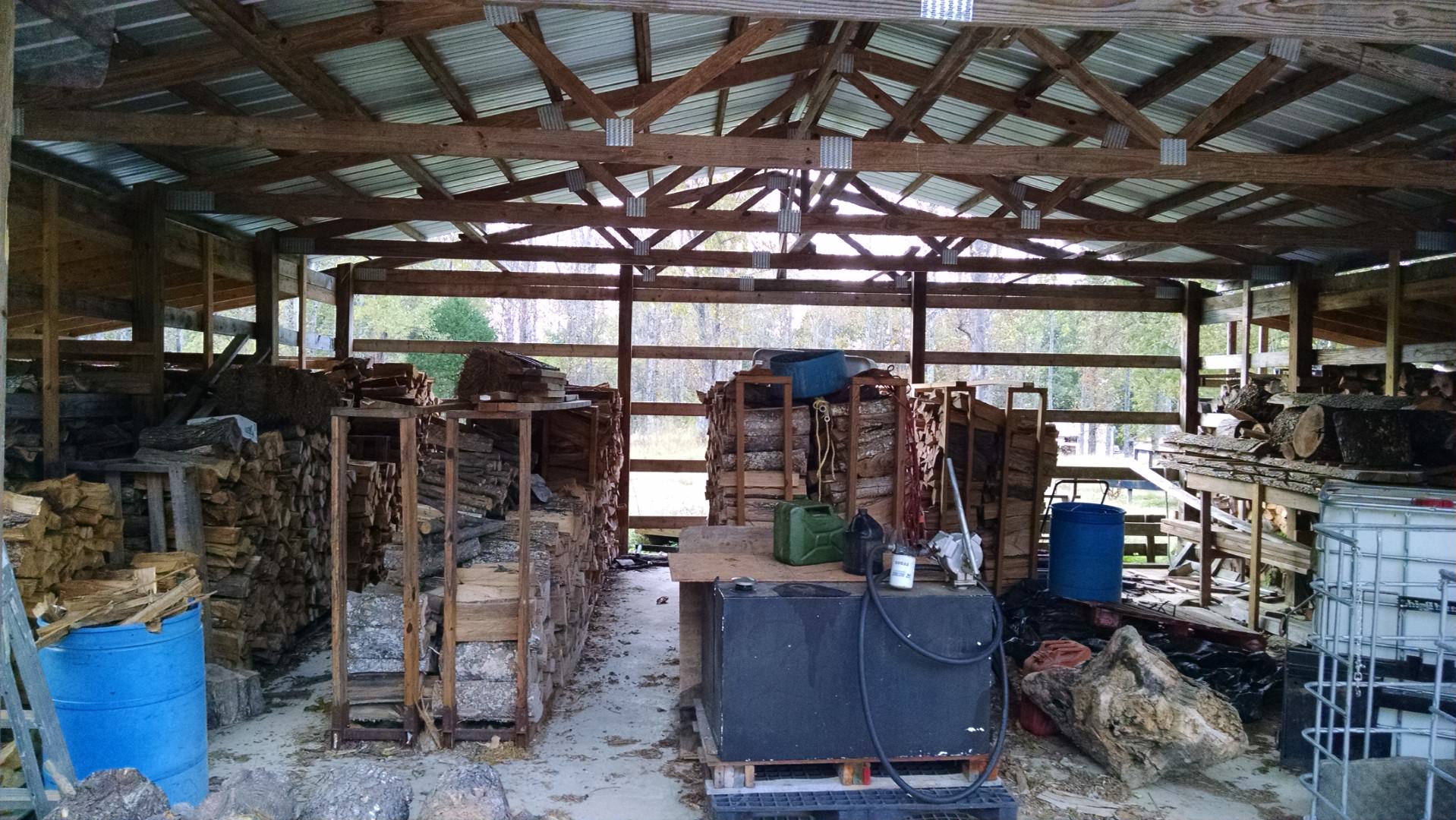 enduring said:
Here's my new wood shed, though shed is a stretch. This is fresh cut wood ready to dry over the next 2 years. I will cover it in the fall and winter. Got feedback on the forum that in Iowa it will dry well in our hot windy summer days, uncovered. View attachment 260937
Click to expand... 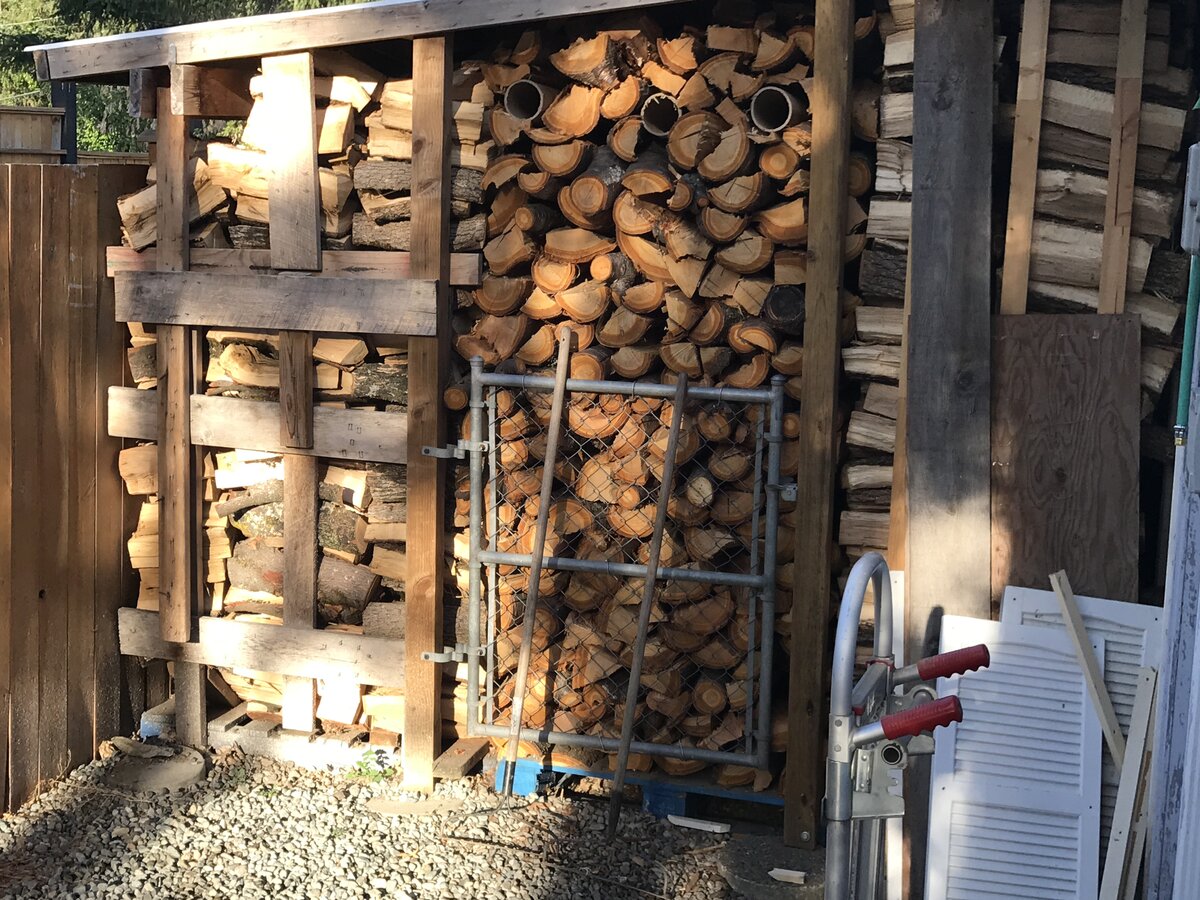 Built from some pallet racking i had laying around. 2 bays, 3.5 cord each.

Here's my shed on the back of my barn. I held the ends up a foot or so and put lattice at the top so I could get better cross ventilation. It's on the south side and is in the sun most of the day year round. My furnace takes 24" and the shed holds 2 rows. Front row is a hair over 6' tall by 30' long and the back row is 7' by 30'. So, approximately 6 cords total which is about a year's supply. However, I also have an equivalent amount of storage in my home's basement. So, in the spring time, I refill the basement from the shed for next winter and refill the shed to get things drying. This keeps me 2 years out. To mitigate any bug issues, I spray the gravel under the stack and all the walls and ceiling of the shed with Permethrin from my pump sprayer. I also spray the face of each row as it is filled. I do the same in my basement. 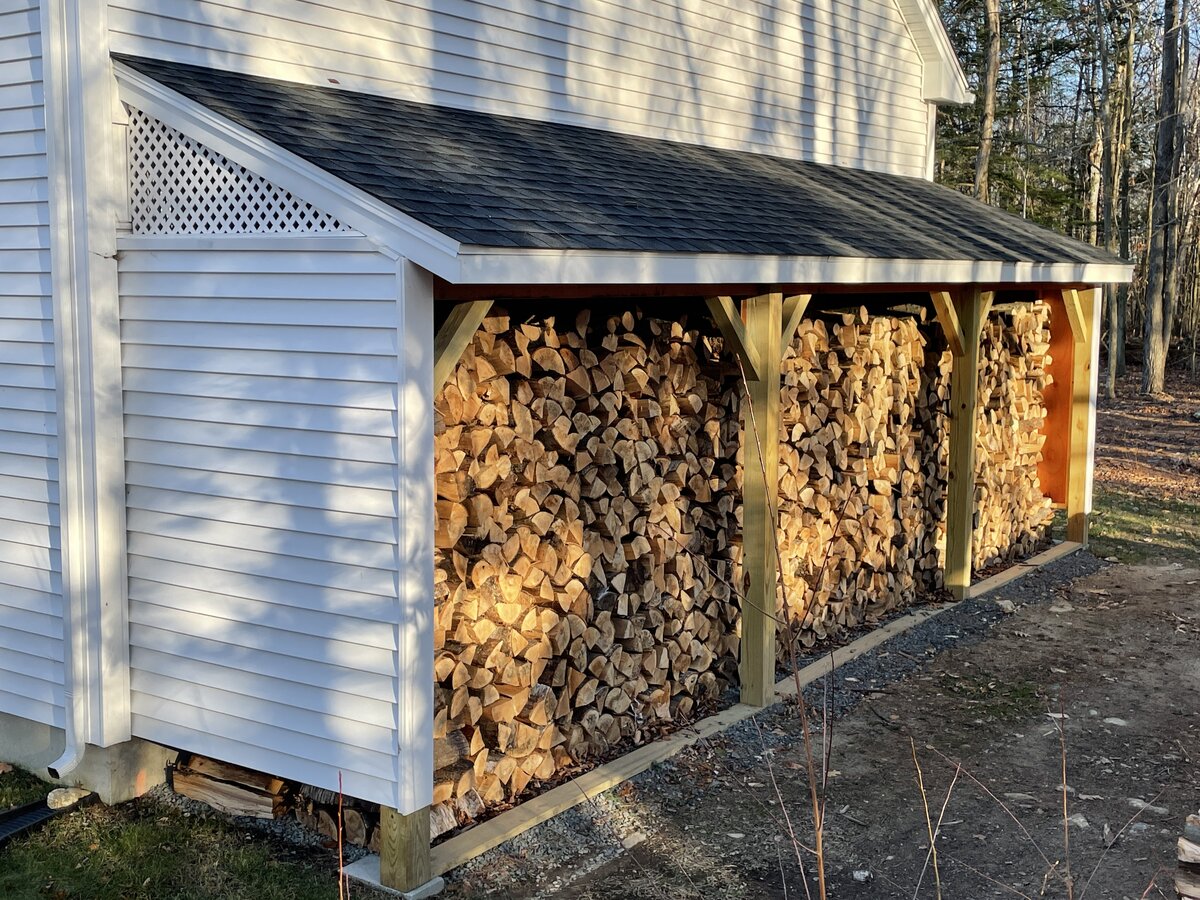 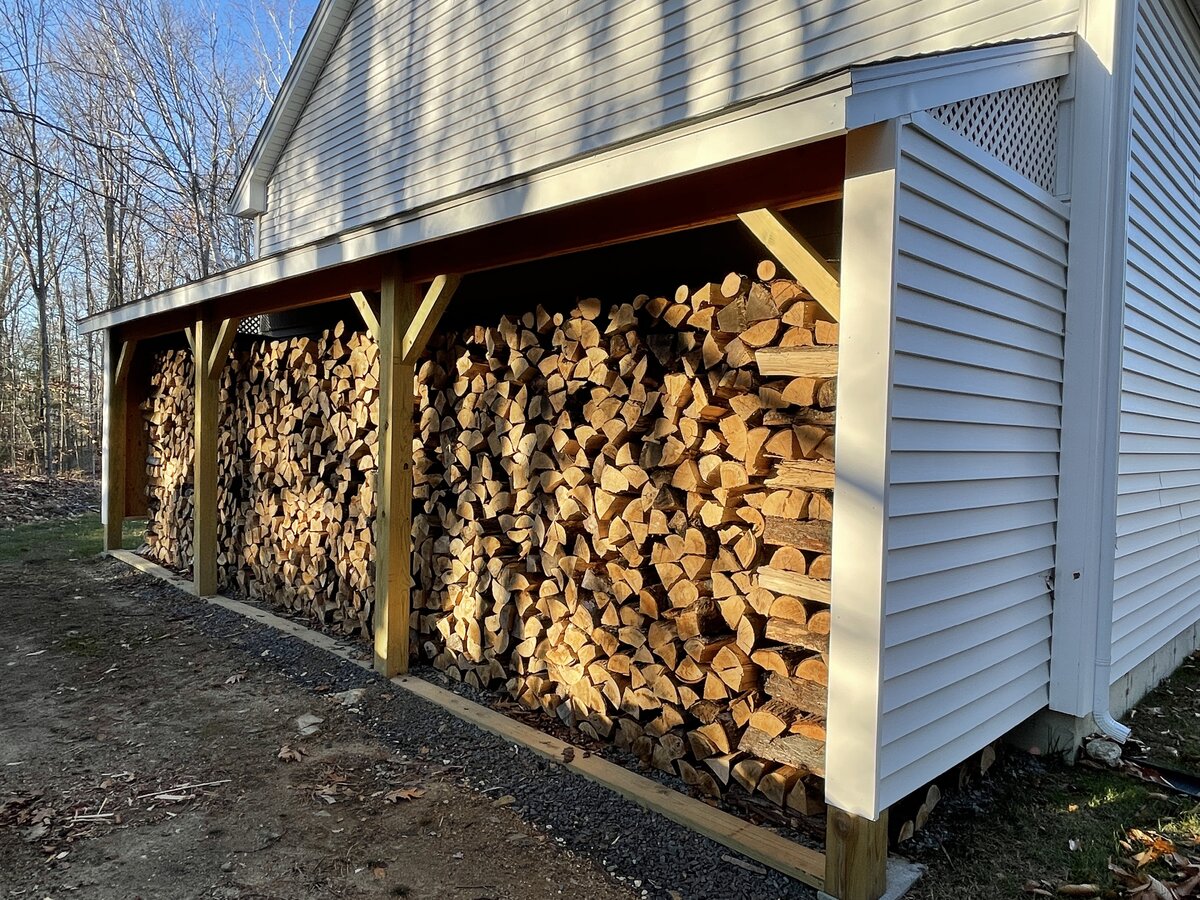 Don't know what she holds. If I was doing it over I wouldn't have added the floor. I added blocks to support the weight. I rotate outside racks for one or two seasons to the shed for the last before burning.

Reactions: jerryswope, ispinwool, Easy Livin’ 3000 and 1 other person
You must log in or register to reply here.