Hi Gang has anyone ever seen a Fisher with an ash pan clean out . I have had a few and never seen this in my travels . 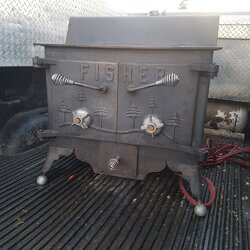 Interesting. I have never seen one like this before. How does the inside of it look like.
Reactions: PA Mountain Man
P

Looks like a later model Grandpa with the tree spacing on the doors.
Would like to see pics of inside.
Is there a plate or UL label on the back?
Last edited: Mar 26, 2021
J

Ill put my thought out before Coaly gets here, I think it may be an addition someone welded on, wouldnt be hard to do. I cant really tell by the pic, but it looks like you can see visible welds where the ash pan set up is, and I dont think any fishers ever had visible welds.

The box with bent corners is a Series III Grandpa. 1979 was the only year you could get the old style doors with flat top or the new Cathedral arched top doors. But these doors were older leftovers having straight handles and older air dampers.

It has the optional Fireplace Legs and someone added the plate between the legs with the ash door.

Does it have a gasket on the ash door? What kind of grate to rake ash through? Assuming the bottom was cut open only over the ash door.
This box would have had a rear shield half way up the back, and a bottom shield that the ash drawer is going to screw up, unless a bottom shield was added under the ash pan?

If it was built as a Series III, it would have a tag on the rear shield, or holes where it was riveted on. It should have been removed modifying it, (it passed due to shields) or if it was built this way, should not have a tag since it's not a tested stove model.

And no ash fender in case something rolls out? Yikes! (Even the Coal Bear with an ash pan has a fender) It should be under the ash door, so if this has a pan that slides out, anything falls on the ash shelf.
Expand Signature
Fisher Stoves An idea America is warming up to.

Kitchen Queen 480
You must log in or register to reply here.