Getting there. What will be the finished surface?
Toggle signature
PE Alderlea T6, Jotul F602
The most important tool in the wood burning process and the largest variable is the one that is running the stove.
S

begreen said:
Getting there. What will be the finished surface?
Click to expand...

Smoothed out with mortar, then high temp house paint.
S

begreen said:
Getting there. What will be the finished surface?
Click to expand...

I suppose I didnt specify what would go under the mortar. The rest of the framing will be covered with 1/2” durock, which will then get a coat of thinset. I want to hold off with the last few sheets until the framing inspection is signed off.
S

Quick follow-up: which high temp paint should I get for the interior alcove walls? I don’t imagine I’d need to buy 1200 degree paint - the only white kind seems to come in a spray can. Would enamel paint work? what temp rating should the paint have?
R

Ended up ordering a gallon of Silacote paint with a quart of their primer. I mixed half the gallon of paint with the quart of primer for the first coat (this thinned it out and let it soak in more). Second coat was just the paint. Enough is left for touch-up.

The alcove walls are done, chimney is connected, flashed, supported, and terminated top & bottom. Slate tiles are in, just need to grout & seal. Next Sunday (11/20) the wood stove should go in - it's in the garage.

All combustibles (wood, paper surface of drywall) ended up at or exceeding the "combustible alcove" clearances, plus there's the 1/2" Durock with 1" to 2-5/8" space between them that is within the "non-combustible alcove" clearances listed on pg 13 of the Lopi Evergreen manual. Behind the Durock, there's a 1-5/8" 20g steel stud, then another 1" of space achieved by doubling up Durock scraps before the drywall is put in place (so over 3" from the hottest wall surface facing the wood stove to the drywall). The white paint should also help reflect a lot of the heat into the room instead of soaking it up.

I framed in the vents at the top with metal studs, and we ordered grate covers that have a tension spring in them to keep them in place. The dampers were removed so they're always open. The vents should allow the stove to really heat the room through convection even though it's in an alcove - the hot air will just get sucked out the top vents even when the power is out.

So close! It's been frosting here lately, so we're definitely looking forward to wood heat again. The heat pump is nice, but nothing beats a wood fire. 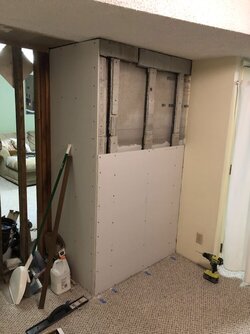 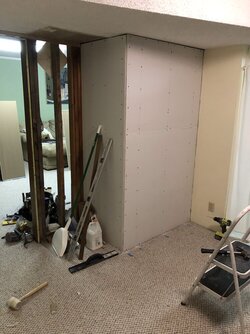 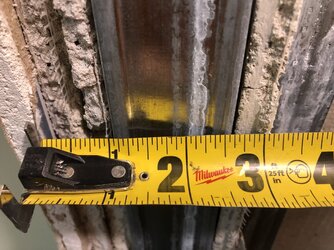 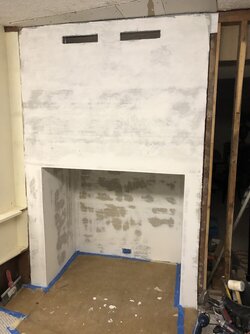 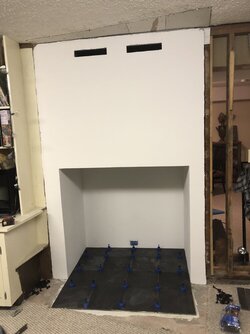 Thanks for the update and visuals. Note that the air gap is not effective unless it is ventilated by at least a 1" gap a the bottom for air to enter and at the top for air to exit. A sealed, static air cavity is not the same WRT protection. It needs to be ventilated to allow the free convection of air.
Toggle signature
PE Alderlea T6, Jotul F602
The most important tool in the wood burning process and the largest variable is the one that is running the stove.
S

Will that be a problem considering all of the clearances to combustibles will still be met regardless?

Edit: I should note that the inspector already approved the current layout without venting - I specifically asked about needing it. Keep in mind that if the inner Durock sheathing were removed, the clearances to combustibles would be within specs as they sit right now.
Last edited: Nov 14, 2022
You must log in or register to reply here.