Anybody put down interlocking foam mat tiles down in the basement?

Flame spread, smoke generation, etc? I couldn't tell from the link. I might buy one and put the propane torch to it to see what happens.
Expand Signature
That is not firewood. It's a rack of solar batteries.

My wife's cousin has them in his basement. Great for the kids to play on down there. Its been at least 3 years and they seem to be holding up okay, but I don't know how much traffic they see.
Ive never asked him about them.
Expand Signature
Regency I-2400 insert
Husky 359 (muff-mod) & 455 on back-up duty. Would love a bigger saw for the tree service scrounging
Fiskars X25 & X27, Cant Hook, Pickaroon
Plenty of Ibuprofen

These & others with a high recycled content work well. Yes spills are easier to clean with a product that is removable/cleanable/replaceable. Make sure you properly seal the concrete floor prior to installation. If you dont & moisture gets through or is trapped you will likely have a nasty mold situation on your hands as neither the foam nor the rubber products breathe.
Expand Signature
"The world is a book and those who do not travel, read only a page" - Saint Augustine

I was at a couple of stores just now looking for basement flooring ideas.
I saw that recyled rubber stuff. It has a pretty rough texture. Might not be too comfortable.
Expand Signature
Hampton HI300 - installed 3/15/12
Windhager BioWin 100/150 - First Fire: 10/16/14
Install Thread
S

I haven't been able to open your link to see which ones you're talking about, but I have some I bought at Sam's Club (Costco-type box store). It comes in primary colors or gray. I used it for a couple of years in a basement between a washer/dryer and a water tank, so there was plenty of water exposure. I wanted something down so that I could sort dirty laundry on the floor, and so that if something fell out of the dryer while I was unloading, it wasn't going straight on the old concrete floor. I really liked it. When I moved, I took it with me and it's on the floor of my pantry, almost four years in that application. I have no complaints, and the texture is nice for barefooting it. Relatively cheap, as I recall, so if you were to get some, you could stockpile a package or two to replace high-traffic areas if they start to wear--but honestly, after six or seven years, no complaints. HTH
Expand Signature
relatively-civil, firewood-buying, soapstone-stove-burning buster
Those details bore the living crap out of just about everyone I know. Here, not so much. PapaDave
Wood heat is cheap. Wood heat addiction is about four dollars a year cheaper than a crack addiction. BBart
This site has given me a place to spend hours reading about how others stack wood when I should be out stacking wood. Matt

The great mats, this looks like a clever solution. They are reasonably priced, go down quickly and should help insulate the cold basement floor. I suspect that they will dent easily by chair and table legs, but you can get load spreaders (2x2 little plastic protectors) that should help. However, if there is a table with chairs that are moved frequently (like a card table), I suspect the product would show wear pretty quickly from moving chairs back and forth on it.
Expand Signature
PE Alderlea T6, Jotul F602
The most important tool in the wood burning process and the largest variable is the one that is running the stove.

I'm going to look hard at this stuff.

I have carpet down in the office and jam room - and I hate the thought of damp (as it sometimes is) carpet.

My builder buddy was telling me about the new "man cave" epoxy cement finishes....that some pros put down, and that sounded great too - maybe with area rugs.
Expand Signature
Hearth.com - Most widely read Hearth Publication in the Universe
Rules? See the FAQ - My Consulting/Marketing Blog
All my opinions are mine.

I wonder if they breathe - that is, if there is water or dampness under them, does it eventually leave...or leave quickly enough? Maybe you have to pull up some of them in such a case.

I have a small area of similar stuff down under my weight bench and around it - in the basement. They work very well.
Expand Signature
Hearth.com - Most widely read Hearth Publication in the Universe
Rules? See the FAQ - My Consulting/Marketing Blog
All my opinions are mine.

Yep, one of the comments says the folks take them up to dry them after they get wet.....
Expand Signature
Hearth.com - Most widely read Hearth Publication in the Universe
Rules? See the FAQ - My Consulting/Marketing Blog
All my opinions are mine.

One thing Velvet & Web, that you want to keep in mind when shopping for products like these (made of foam/rubber) or other highly flammable products is the flame spread rating on the product. You should favor products that have been treated with an agent to retard flame & therefore carry a lower spread rating. As this is a residence & not a commercial building, building code does not address this issue to a large extent. Now if it were furniture on the other hand, testing would have had to been done & passed to a given level & you could feel safer about your purchase. Just saying take the extra time, read the package & check the websites. If you are unsure or cant find the info then look at commercial products that have been tested. Best fire insurance is never having a fire & with most of us being wood burners the ignition & fuel parts of a fire already exist.
Expand Signature
"The world is a book and those who do not travel, read only a page" - Saint Augustine

When they get older and "dry" they have a terrible static problem that can zap your tv or other electrinics.
Expand Signature
Magnolia woodstove in den.
Osburn 1800 insert in livingroom
one Missouri foxtrotter
Kubota 7100
'96 Ford pickup
Poulin 20" chain saw

I didn't know that.
I'm currently thinking along these lines:
http://tinyurl.com/6k6kera 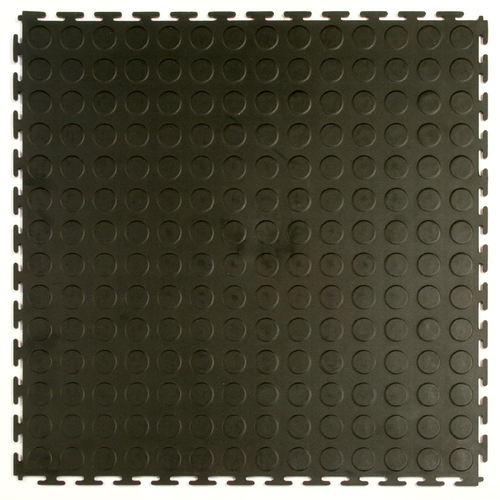 The type I had static problems with are the soft foam type.

There are three types.

The image shows a harder type. I don't know if they would have a static problem.
Expand Signature
Magnolia woodstove in den.
Osburn 1800 insert in livingroom
one Missouri foxtrotter
Kubota 7100
'96 Ford pickup
Poulin 20" chain saw

Yes. It's not rubber. Rubber, I've found so far, is mostly all recycled and doesn't look that great.
This stuff seems a little like rubber but I'm sure it's plastic.
Interesting that nowhere on the box or tiles is there any indication of what it's made of.
Expand Signature
Hampton HI300 - installed 3/15/12
Windhager BioWin 100/150 - First Fire: 10/16/14
Install Thread

The tiles look like a knock off of Roppe and Pirelli floor tiles. Those products are rubber. I've installed them in a couple facilities and a boat's engine room. It gets glued down with a special epoxy mix. We were surprised when we bought our house that it also had Roppe rubber flooring in the kitchen. I kept it when we remodeled. The tiles stand up very well. I see that Roppe also sells a vinyl tile now, but I haven't tried that product.

http://www.roppe.com/default.asp
Expand Signature
PE Alderlea T6, Jotul F602
The most important tool in the wood burning process and the largest variable is the one that is running the stove.