I almost took a pic of some big birch rounds today to do a ID thread, but thought better of it...

So I've been splitting 3 loads from a tree services storage pasture and have one that I'm not familiar with and "the Google" isn't helping.... No leaves, no buds, etc... Just bark and split. It has a dark red/purplish heartwood, purple streaks in the sapwood, platelike bark similar to honey locust, and is pleasantly fragrant but I can't identifylike what... Nothing like the white wood and pink/red streaks in the box elder. Doesn't stink or split like elm. So far in the 3 loads I have ash, elm, birch, box elder, pine, some sort of willow (I think).

I don't think it's black locust, not brown enough.... maybe lilac - seems too big? Not mulberry, that's more yellow heartwood; although there's some yellow in the bark fiber... It's very heavy and split like hardwood. Maybe some other sort of ornamental? Trying to figure out where to stack it. If all else fails it'll go in the 2 year seasoning sugar maple/birch/hickory/honey locust stack... Other stacks are softwoods and "quick" hardwoods... No oak stack yet, but that's coming sometime.

Photos don't do the color justice... it's absolutely gorgeous. 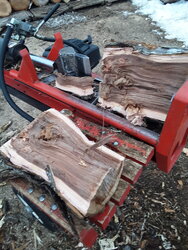 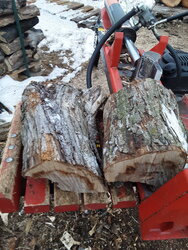 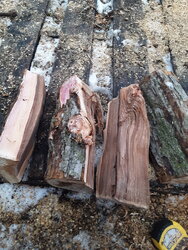 Maybe, but I don't think so. Plates are more "attached", not hanging loose. Maybe pignut or bitternut? I haven't split much hickory, but what I have is brown. Lots around here, but not accessible to me. Drool over it when we go for walks. Think the color of rosewood for the tint... more dark red or purple than brown. I wish my phone camera was better to show the color.
Expand Signature
Summers Heat 50-SNC30 by Englander
N

Has anyone ever seen shagbark with that red/purple hue? The only hickory I can remember was a dead one I took down this summer. The wood was brown and a little lighter in color, but it was a yard tree. Had the shaggy bark but different leaves than shagbark I think - smaller with serrated edges. Very heavy like this is. In the 3rd pic where the bark is peeled away on the middle piece you see the color sort of. Mix that color with the heartwood and you get the idea. Maybe all the "shag" is knocked off? Does anyone else agree with Ctwoodtick or have any other ideas?
Expand Signature
Summers Heat 50-SNC30 by Englander

I’ll second walnut. But, that would have a distinct walnut smell.
Reactions: JamesGuido

I'm thinking Ctwoodtick might have been right or I was too quick to rule out black locust. Bark is wrong and it's way heavier than black walnut. I have some black walnut slabs I had milled out of logs with the bark on yet. Haven't seen black locust in over 35 years. All I remember is the thorns and the swinging wedge bouncing off the rounds.

Appreciate all the input. It's going on the 2 year seasoning stack. See attached photo comparisons. 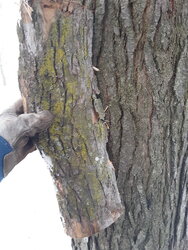 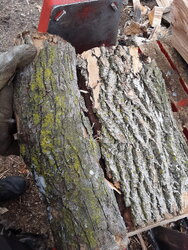 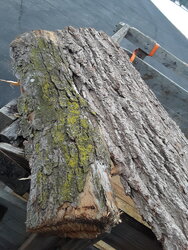 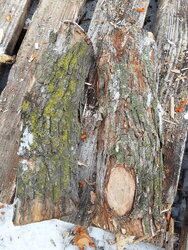 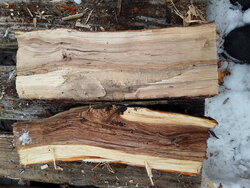 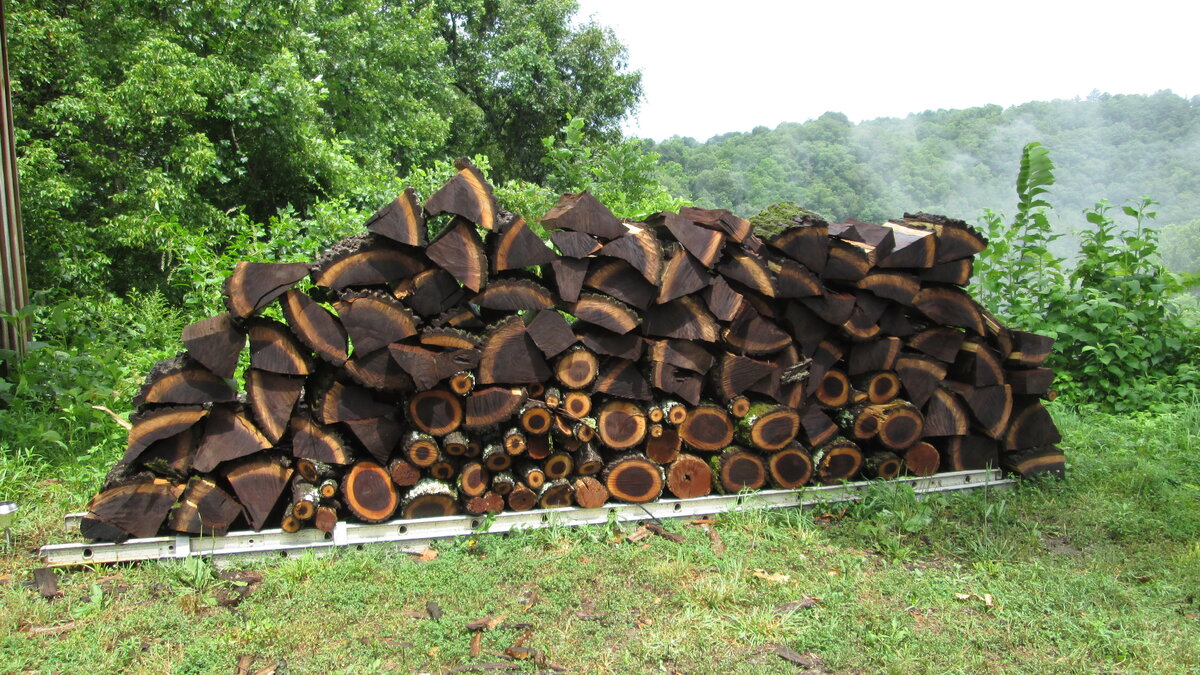 Interesting so many think the walnut... Doesn't look anything like the black walnut bark that I have now or the 40-50 black walnut tree's in my Mom's yard. The heartwood is similar, but the bark is not. I think the weight is too heavy too. Walnut always seems similar to ash in weight; this is HEAVY like beech, locust or hickory...

Theoretically, what condiment goes with hat...?

I made another run for a load today before the wet heavy snow makes access to the pasture impossible. Found a 22" round of honey locust and a couple of smaller rounds not far from where this came from. 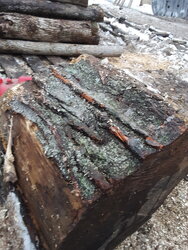 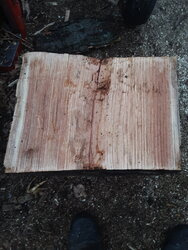 I don't know what it is but it sure doesn't look like any walnut I've seen around here.
Expand Signature
Buck 74
Reactions: PA. Woodsman and NickW
W

I’m not sure what it is, but I’m quite sure it ain’t black walnut. At first look I would have said hickory.
Expand Signature
PE Super Series Insert PE Summit LE Insert
Husqvarna 181, Jonsered 625II, Dolmar PS-45
Reactions: Grizzerbear and PA. Woodsman
N

Not the right smell either. There is nothing like the godawful stench of walnut. I know it well - used to hit the nuts in the shell with a baseball bat. I have some cherry and walnut slabs drying in the rafters of my garage. Go in the man door and you get hit by the walnut stench. Open or walk past the overheads and you get the sweet aroma of cherry. This stuff is fragrant and kind of sweet. I asked my wife what it smells like and she said "wood".

Well if I am wrong my condiment of choice for a hat wood be hoisin sauce. You can eat anything with that stuff.

Mulberry, I lived on a farm in NJ had a few growing on a hedgerow. One lost a main leader during hurricane sandy which I cut up and split. Looked just like your photos. Very hard to split, my splitter struggled and when it finally built up enough pressure to split it was violent!
N

Jags said:
Well if I am wrong my condiment of choice for a hat wood be hoisin sauce. You can eat anything with that stuff.

Being from Packerland, I'd personally go with cheese...

Just to be safe it went in the 2 year seasoning stack.
Expand Signature
Summers Heat 50-SNC30 by Englander

gearadrift said:
Mulberry, I lived on a farm in NJ had a few growing on a hedgerow. One lost a main leader during hurricane sandy which I cut up and split. Looked just like your photos. Very hard to split, my splitter struggled and when it finally built up enough pressure to split it was violent!
Click to expand...

STop worrying about what it is and just burn it. You have cut it up, split it and now you want to what it is. It's firewood.
Reactions: sloeffle
N

Davesch said:
STop worrying about what it is and just burn it. You have cut it up, split it and now you want to what it is. It's firewood.
Click to expand...

No worries! Just trying to get smarter... as stated earlier it went in the 2 year seasoning stack with sugar maple, hickory, honey locust and birch.
Expand Signature
Summers Heat 50-SNC30 by Englander

It's definitely flammable!
You must log in or register to reply here.