Did a little experimenting this winter......just how clean does a Kuuma VF100 burn??

Back at the end of February I had an idea. It was a crazy idea, but an idea I wanted to try anyway and not knowing how it was going to turn out I kept things quiet.....until now.

Background info. I burn seasoned wood (stuff I burned this year was mostly split/stacked for 4 years). I have a rather tall 34ish foot ICC/Excel chimney system which was just installed back in 2014. The whole system runs in heated/insulated air space except for the last 5' or so where it sticks up through the roof. It has no offsets and goes straight up and sucks like a hoover. I have to add three washers to the weight on the BD and still keep the weight set all the way out on the max position in order to keep my draft around -0.05" W.C. This leads to a ton of heated basement air being sent right up the chimney.

I also have a couple oversized baffles placed in the heat exchanger to make the flue gasses have to "work harder" and dissipate around in order to escape....therefore leading to a bit more heat extraction and trying to take advantage of my excess draft.

I have an existing 6" dia outside air duct which was being plumbed into the main house cold air duct by way of a BD. The theory behind this is if the house ever saw enough negative pressure while the LP furnace was running the BD would open and would allow outside air in instead of trying to pull it in through other places. This is great in theory, but our house is not built tight enough for this thing to work as designed. So the outside air duct was pretty much not being used.

So, what I did was disconnect the 6" insulated flexible duct at the cold air BD and extend it along the sill plate to near where the Kuuma is. I then dropped it to the floor, looped it up about 3', then looped it back down to about 1' from the floor. I basically created a "Saskatoon loop". I then added a 6" tee at the end. The end of the tee pointing down at the basement floor I added a 6"x4" reducer and this would provide makeup air to the basement (for drier, water heater, combustion air). The other end of the tee I added a 6" semi-rigid duct and ran that over to my BD. I used a couple 90° - 7" rigid elbows and a 7"x6" reducer and connected them to the 6" semi-rigid duct coming from one end of the 6" tee and hung it from my BD. So, not only am I supplying makeup air for the Kuuma, water heater and drier at the level of the primary air intake of the Kuuma at the basement floor where it will stay, I am also solely taking in cold outside air and sending it up the chimney instead of the heated basement air to regulate my draft. I know this is a big no-no.....but if any furnace could pull this off it would be the Kuuma. I had to try it.

Like I mentioned, I did this at the end of February. My draft remained rock steady at wherever I wanted it set at. I was able to move the weight a bit inward and I set it and left it set at -0.05" WC. Since then we have had a few single digits nights. I have a HVAC temp probe inserted into one of the 7" elbows to monitor the air temp being sent up the chimney. The coldest air I've seen being pulled into the flue was 26°, even if the outside temp was 8°. I also noticed on those cold nights and/or when the water heater and/or drier is running there is a certain level of air coming into the basement from the 4" opening at the bottom. So in addition to supplying enough outside air to regulate the draft properly, the make up air duct is also able to supply enough air to supply the drier/water heater when running. I immediately noticed a difference in how the house heats. It heated easier, plain and simple. During to the shoulder season, the last month or so, I was making a fire in a cold firebox almost every night. Fires started in a cold firebox equals inefficiency and is the dirtiest time frame of wood burning. Although I've noticed, when opening the door quickly, I'd be getting secondary burn already 10 minutes or so into a fire after starting it from scratch in a cold/luke warm firebox. So I had a handful of cold nights with continuous burning as well as a month of daily fire starts. Should be a good sample of varying/harsh conditions when I look at my chimney and stove pipe to get a good feel for how things are going. I was peaking inside my BD on occasion to make sure I didn't see any red flags. Never saw anything and everything was working out as I had hoped and now I had to just sit and wait till the end of the heating season when I took apart my stove pipe and inspected the chimney.

This past weekend is when I decided to remove/inspect my stove pipe as well as take a peak up my chimney and see how it compared to the previous years. The stove pipe had the typical amount of flyash buildup. ZERO creosote that I could see. If there was any it was definitely the powdery stuff and NOT any of the hard crusty shiny black stuff NOR any of the black gooey stuff. When I took the stove pipes outside and tapped them on the concrete, the stuff which came out was brown and dusty and released with a simple tap on the concrete. When I looked up the chimney I saw the same stuff. Just all brown flyash and no black creosote at all. I do plan on running a brush up it later in late summer, but everything looked great. I probably don't even have to clean it, but I actually do it every year just for piece of mind and because it's so easy to do from the bottom.

So, just how clean does a Kuuma burn? Clean enough to where one can mix in cold outside air into the flue and not create any creosote. Like they say, when there's no smoke, there's no creosote!

Here's a couple photos of the setup. 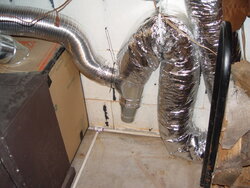 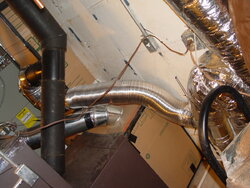 Interesting, hooking a baro up to an OAK isn't something that ever crossed my mind before. Would that be against a code I wonder? (Curious).

I keep a window slightly cracked all winter, that is right behind my boiler. The opening has some FG insulation stuffed into it, so it isn't wide open - air would get sucked thru the FG. That window is also only maybe 4' from my baro damper. But my baro stays shut most of the time anyway, except for when the wind is blowing. And since I'm only burning 6 hours a day max to start with, my heat loss shouldn't be that great. But I could see something like this helping out in some cases, such as yours. Mine specs 0.08".
Expand Signature
Varmebaronen UB 40 with 660 gallons of pressurized storage - first fire 10/08/2012.
(Replaces a Benjamin CC500 - history after 17 years.)
No fans for me - all natural.

I ended up sealing off my BD and still had a draft .08. Like you my stove pipe was only fly ash but I haven't looked in the flue tile.
Expand Signature
Jotul Rockland 550 insert
Tarm Scandtec Solo Plus 30
2, 300 gallon JW tanks
Super Split
372XP, 257XP and a baby 141

maple1 said:
Interesting, hooking a baro up to an OAK isn't something that ever crossed my mind before. Would that be against a code I wonder? (Curious).
Click to expand...

I was planning on adding a OAK and I had the idea pop into my head while brainstorming after deciding to use my existing OAK.

I don't know about the code thing.


Bad LP said:
I ended up sealing off my BD and still had a draft .08. Like you my stove pipe was only fly ash but I haven't looked in the flue tile.
Click to expand...

My draft would skyrocket if I blocked off my BD!

JRHAWK9 said:
I was planning on adding a OAK and I had the idea pop into my head while brainstorming after deciding to use my existing OAK.

I don't know about the code thing.

My draft would skyrocket if I blocked off my BD!

Mine was puffing and fluttering then locking in a full open condition. I wrapped it in 4 layers of HD tinfoil and sealed it well around the flanged edge as a test. Problem went away by about 98% and little to no change to the draft (lower) depending on wind.

Finally removed it and placed a real cap over it secured with 3 tec screws.
Expand Signature
Jotul Rockland 550 insert
Tarm Scandtec Solo Plus 30
2, 300 gallon JW tanks
Super Split
372XP, 257XP and a baby 141
You must log in or register to reply here.