I have a fisher wood stove and its far to big for my home. 1000sq foot up and 1000sq foot down, according to the WET inspector the hearth and surrounding area is not to code nor was the pipe large enough for the amount of heat it put out. To make matters even worse the pipe went up through the ceiling into a bedroom closet to the roof. I am doing renovations and cant use it with respect to insurance because it wasnt certified when I bought the house.

I was thinking of selling it but wanted to identify what model and aprox how much it would be worth. Due to its weight ill have to sell it locally as its far to heavy to ship in any normal capacity.

Thanks in advance for any feedback offered. 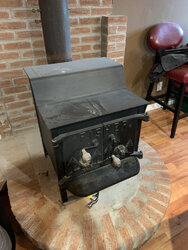 Welcome to the forum @sheldontking !

It's a Grandma Bear. I bought my Grandma Bear last October for $300 in southeastern NY. Prices are all over the place. I've bought 5 Fisher stoves the past 12 months and never paid more than $325 for any of them, and I paid the seller's asking prices every time because they were asking fair prices.

5 Stoves in the past 12 months, WOW I am curios as to what do you do with them. Are they inside, are they for parts, do you refurbish them, resell them, maybe you just like them. Do you heat with all of them in a huge house , How about a few pictures . I respect people who stand by their convictions
Reactions: Todd67

Frankdozer said:
5 Stoves in the past 12 months, WOW I am curios as to what do you do with them. Are they inside, are they for parts, do you refurbish them, resell them, maybe you just like them. Do you heat with all of them in a huge house , How about a few pictures . I respect people who stand by their convictions
Click to expand...

I bought the Coal Bear first, to use in my garage. But after restoring it and realizing it was a little too small to heat a big uninsulated garage, I put it in my mudroom as a collector piece. Next I found the Grandma Bear, but I didn't get it restored before winter, so I applied a good coat of PB Blaster to the outside of the stove to keep it from rusting in my garage. Then I found a Grandpa Bear and brought it home to restore. These 3 stoves were bought between October and December of the same year. I restored the Coal Bear first, then winter set in and I had to wait for summer to restore the Grandma & Grandpa Bear. Then, by the time summer rolled around, I decided that I didn't want to heat my garage for a few hours, just to do a very random project. So, no need to install a wood stove in my garage.

My neighbor needed to replace his old and worn out cast iron wood stove and asked me if I had a Fisher stove that he could buy. He really like the Grandpa Bear. So I sold him my fully restored Grandpa Bear for what I had put into it ($650 for the stove, all new firebricks, 5 cans of paint, 5/16" baffle plate). I also installed it for him at no extra cost. His farm house is over 100 years old, bigger than my 1600 sq ft house, and more drafty than my house. The Grandpa Bear was a perfect fit for his house, and his house already had an 8" flue and Class A chimney.

I restored the early 3 pc top Papa and we have it in our living room as an end table. The other Papa is in my mudroom, still not restored, but it was never fired by the previous owner, so it's in good shape.

I have two neighbors that want wood stoves for their garages, so that's where the Grandma Bear and Coal Bear might end up.

I'm done adding stoves to my "collection". I heat my house with a Mama Bear that I bought and fully restored in 2012. It's my only heat source for my 2 story house. I also have the Baby Bear that was in my house when I bought the house, but it wasn't installed yet. So I restored it and put it in the mudroom.

Sorry for the long winded reply. It's more complex than it might seem. I never bought any stoves with the intent of selling them. But I soon realized that I don't have the room to store a bunch of stoves that I'll never use. If my neighbors have a need for a stove, then why not help them out? I'll keep the Baby Bear in case I ever need to heat a small cabin. I'll keep the unfired Papa Bear in case my son needs to use it to heat his house. I'll keep the Papa Bear end table because it's the earliest Fisher stove I've ever seen, and I bought it in Oregon and had it shipped to NY. The Mama Bear is my primary heat source, so that's not going anywhere.
Expand Signature
Fisher Papa Bear, Fisher Mama Bear, Fisher Baby Bear, Fisher Coal Bear, Fisher '76 Grandma Bear, Fisher Grandpa Bear
You must log in or register to reply here.