Hi! New to forum and relatively new to pellet stoves. We bought a house in 2019 that came with a king 5502m. It has worked great since we got the place, just put in pellets, clean, and enjoy - had to replace igniter last year but that’s it.

This year we fired it up and it ran for a bit then shut off and threw an error 2. There were plenty of pellets and I made sure there were no jams in auger feed and started it up again, it lasted about 10 minutes then smoked so I shut it off.

Now when I try to start it the draft fan goes, it feeds pellets, the igniter goes, the pellets catch. Then the draft fan shuts off, it keeps feeding pellets and burning, and what sounds like the room fan tries to kick on. It spins up for a second then shuts off. It keeps doing this and left for many minutes it never stays on. The pellets will just burn and smoke and draft fan won’t come back on.

What am I doing wrong??

I tried putting in test mode and it passes all tests including the room fan which will run on test mode as long as I let it.

I’m at the point that I’m just going to start placing things, I just redid the door gasket and that did not fix it, next will be glass gasket but I don’t think that is the fix.

Any help, insight, suggestions, or follow up questions would be appreciated!

I'm not familiar with that brand of stove, but if it starts up normally and then shuts off when it's about up to temp, could it be a snap disc temperature sensor? A lot of stoves have a sensor that tells the controls that the stove lit and is up to temp, and if not, shuts down and throws an error code.
Toggle signature
Harman P43 - Average 3.5 to 4 tons per year
Previous Stove - Englander EP-25
Reactions: ARC and Ssyko

I couldn't figure out where the temp sensor was, thank you for reply though.

I called USSC and they think that because the room fan works in test mode but not during startup that something is wrong with the control board since clearly the components work so they think it is the brain controlling those components. I have ordered a new one ($200!) and when it arrives I will install that and hope it fixes the problem so I don't have to drop $1k on a new stove :0

Thanks, if anyone has other suggestions in the meantime just let me know.
Reactions: ARC

Ok. Installed the new control board and it is doing the exact same thing! Any further ideas??
Reactions: ARC

Look in you manual for the low limt/proof of fire snap disc/sensor and pull the 2 wires off and connect them together and start the stove. If it works as it should replace that snap disc.
Toggle signature
Are you SURE you cleaned it good?
Where is your manual?

I couldn't figure out where the temp sensor was
Click to expand...

Ussc 5502 does not have a low limit switch it runs off a Thermistor attached at J9 on control board and runs to the Exhaust blower housing. Should be a white cloth covered wire. You replace board so the J9 connection should be good. Trace the wire from the control board to the exhaust blower housing look for pinched or broken wire. Make sure the end attached to exhaust housing is tight. If no loose connections you might need new thermistor they do not go bad often but it does happen. 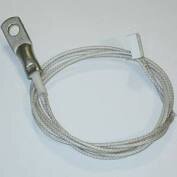 Toggle signature
2007 ussc 6039
You must log in or register to reply here.