I had decided to put in a wood stove and after calling several fireplace stores to get quotes and realizing how backed up they were I decided to take the project on myself. I referenced several posts while doing research to come up with my plan and thought I would share my installation experience to possibly help others. Over the past week I have tackled the chimney. I used Selkirk Supervent system from Menards and everything was available in stock except for the insulation for the wall thimble. Below is a summary with pictures and details of the progress. If anyone has questions feel free to hit me up and I can give more details.

Corner in walk out basement where I wanted the stove.

Laying out stove and checking clearances and hearth pad.

Since installation was going in basement I was able to just cut carpet back and tile directly on the foundation slab for my non combustible hearth pad. I checked the slab for cracks and decided since it was located in a corner with the existing slab in good condition I would just tile directly to the slab. If this was not the case you can use cement board or uncoupling membrane to prevent cracks from migrating from the slab through your tile work.

The plan was to use a wall thimble with prefabricated chimney running up the outside of the house. Upon opening up the wall I found that my gas line was in the way of where the chimney needed to pass through. This wasn't a big surprise as the gas regulator and entrance is right out side and I didn't know where it was routed but knew this was a possibility. 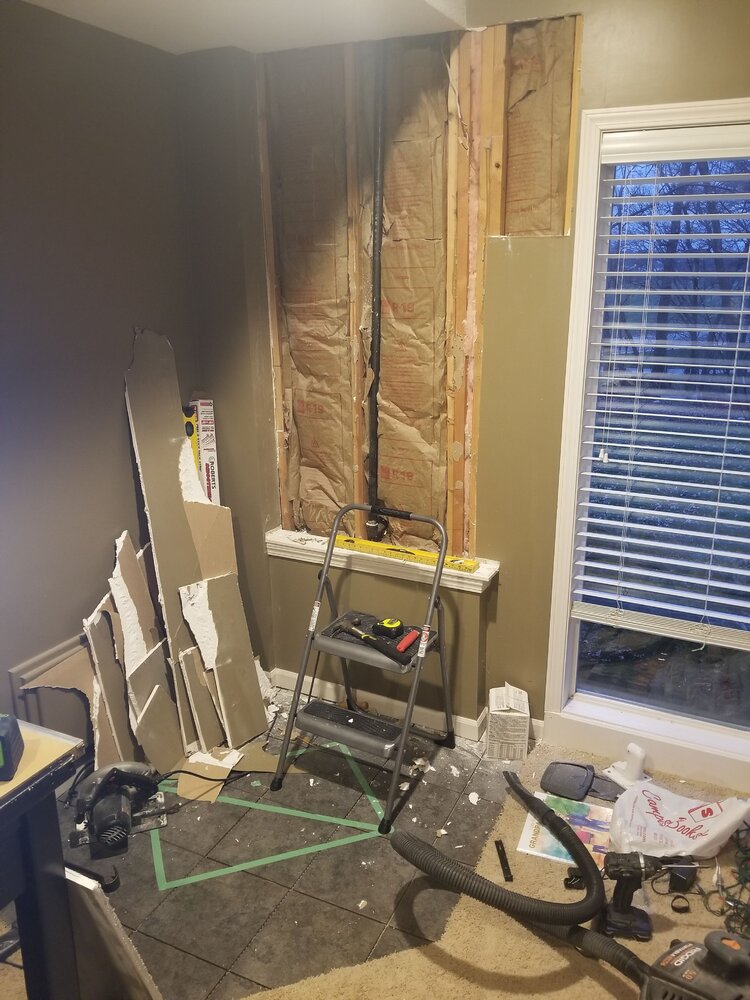 I rerouted the gas line around the penetration and framed in the wall thimble per the manufacturers instructions. I also had to move an exterior light that was positioned behind where my chimney would be installed. I was able to move it over a stud opening towards the window and just put a metal cover over the existing opening as it was outside my required clearances. 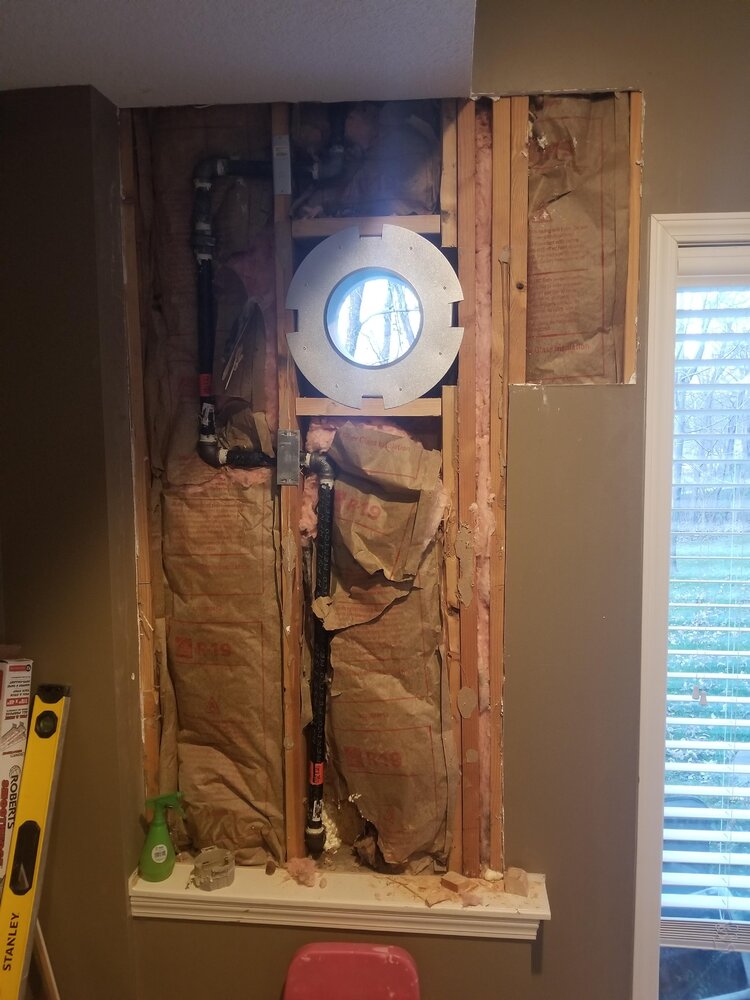 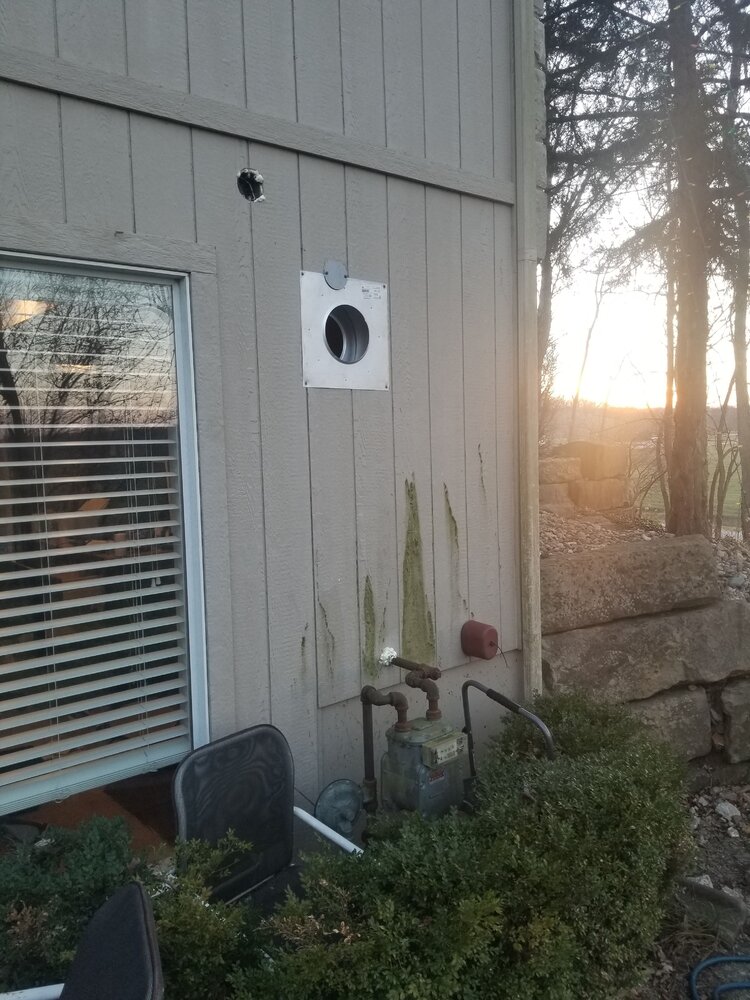 I then installed the chimney tee section and wall support and attached those to the studs per manuf. instructions. The reason I had to use the stud opening where the gas pipe was is that I had non typical (16") stud spacing on either side due to the distance from the corner and window. The wall support and all of the chimney wall attachments are predrilled for standard 16" stud spacing. I was able to install up to my soffit from a ladder but then decided to rent a lift for cutting soffit and extending above roof. I would strongly suggest this as it was much easier than working off a ladder. 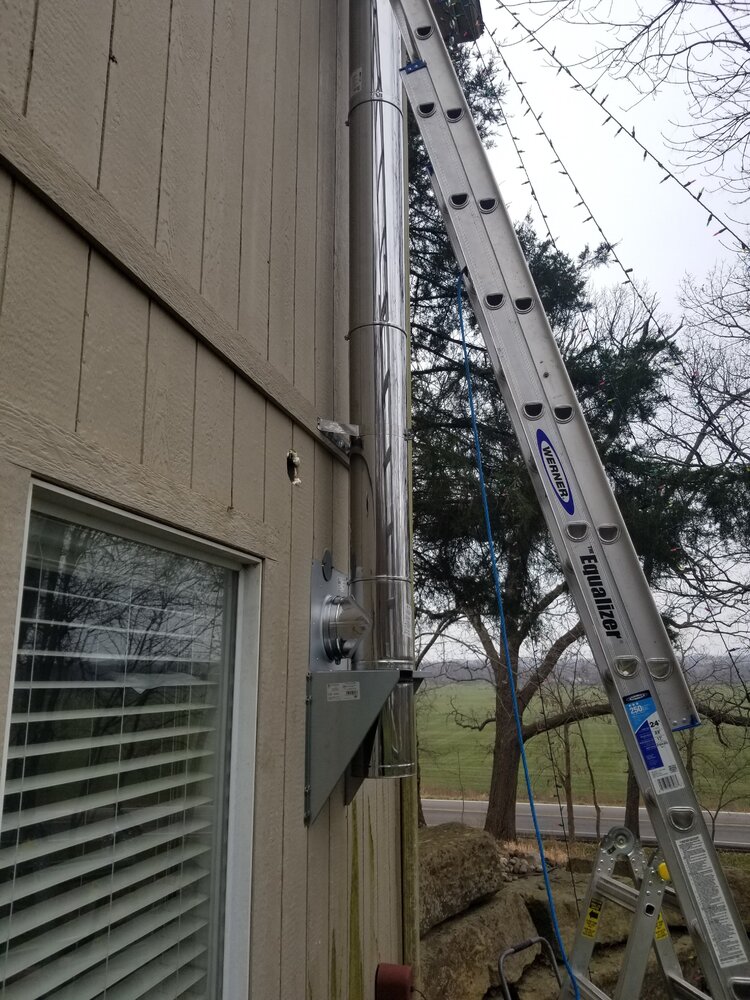 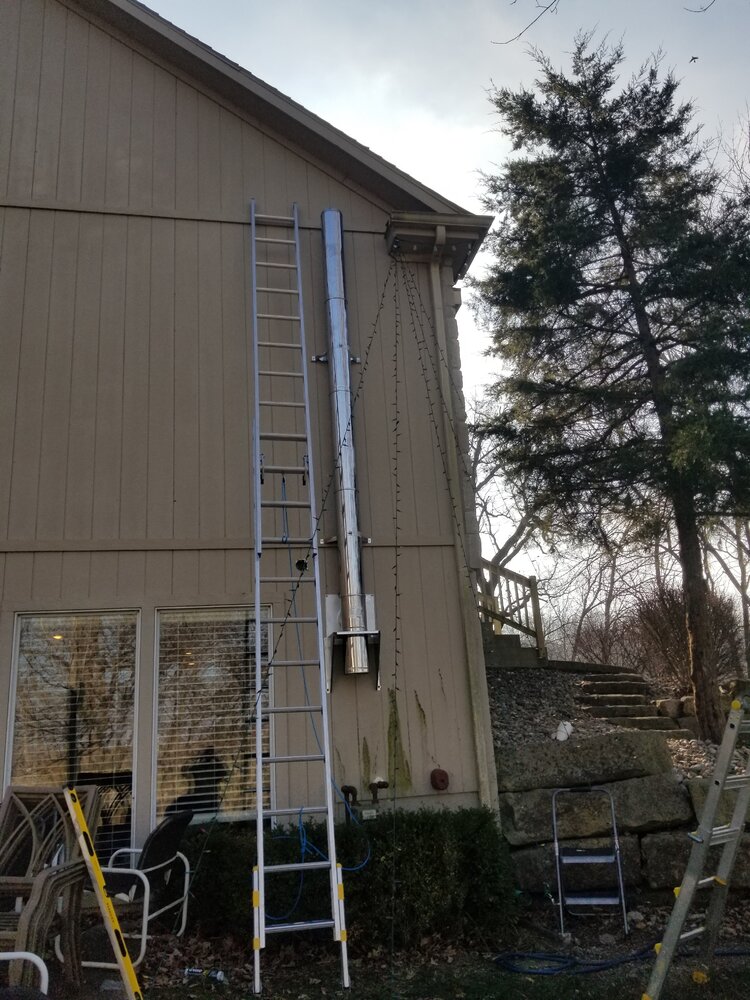 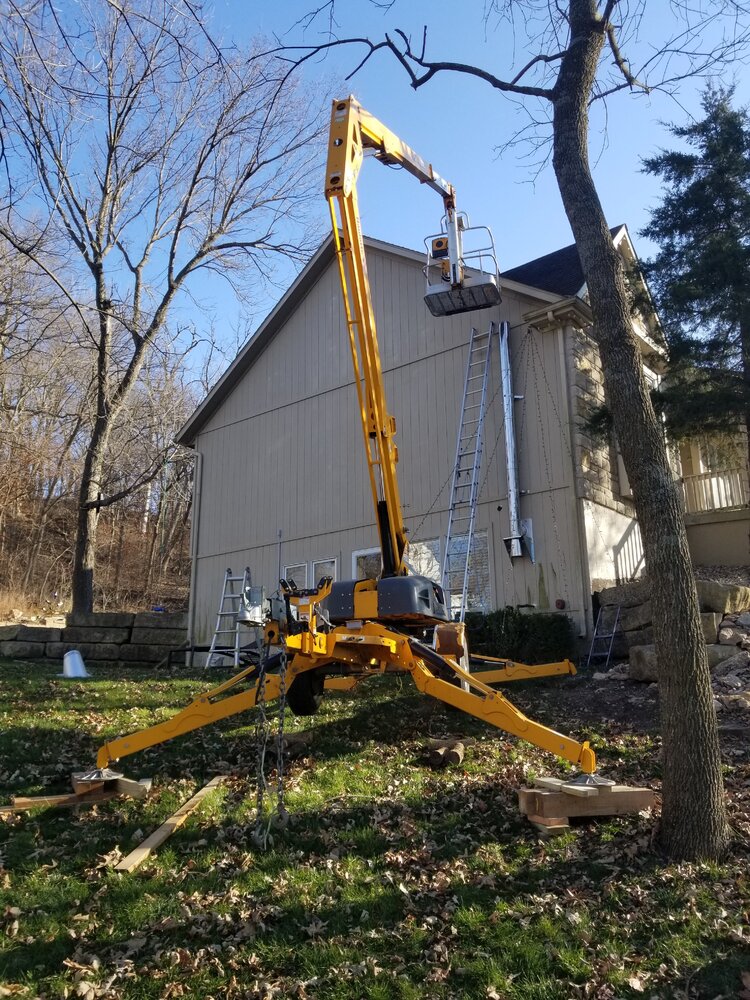 I simply used a sawzall to cut through my soffit and roof sheeting and shingles. I used a level on the sides of my chimney to extend marks up to the bottom of my soffit and then made sure to give myself enough clearance on each side. The chimney requires a 2" clearance and I went ahead and cut an extra inch so had 3". Once the soffit was removed I cut a 2x6 with fillets top and bottom to match the roof line and slid in between the roof sheeting and bottom soffit to block out the opening on the sides. The standard wall supports hold the chimney exactly 2" from the wall face so I had to make sure that I used trim behind them so that I maintained the 2" clearance from my existing siding trim boards. The chimney required to be attached at least every 8' going up but I went ahead and put in an extra wall support in so I could have one right above Tee at the bottom and right below the roof. 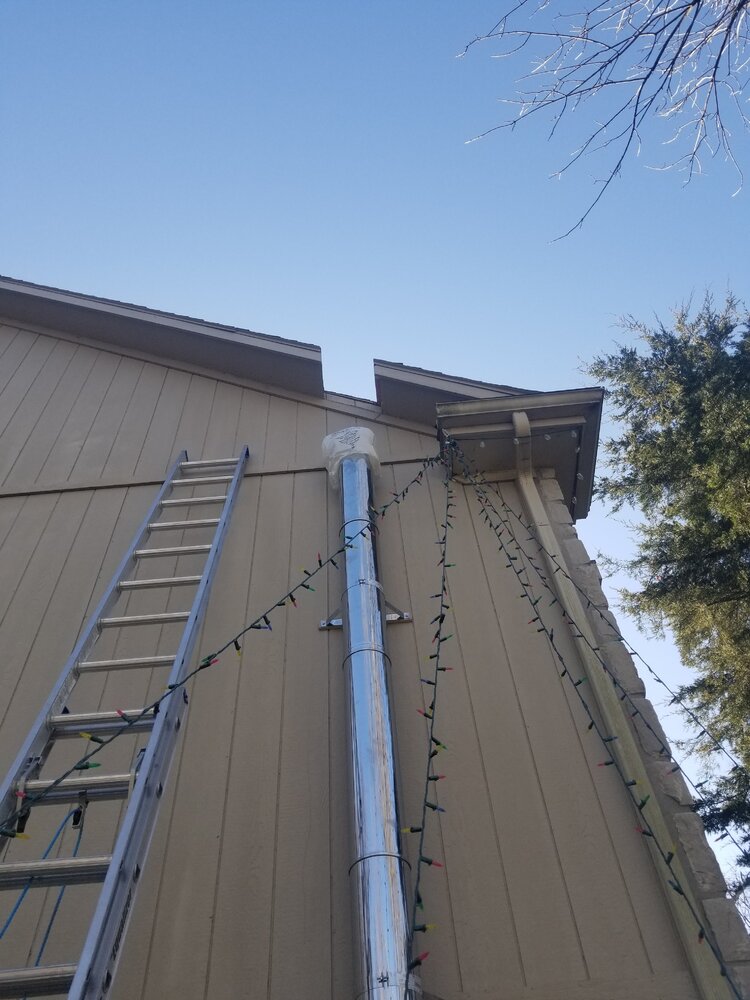 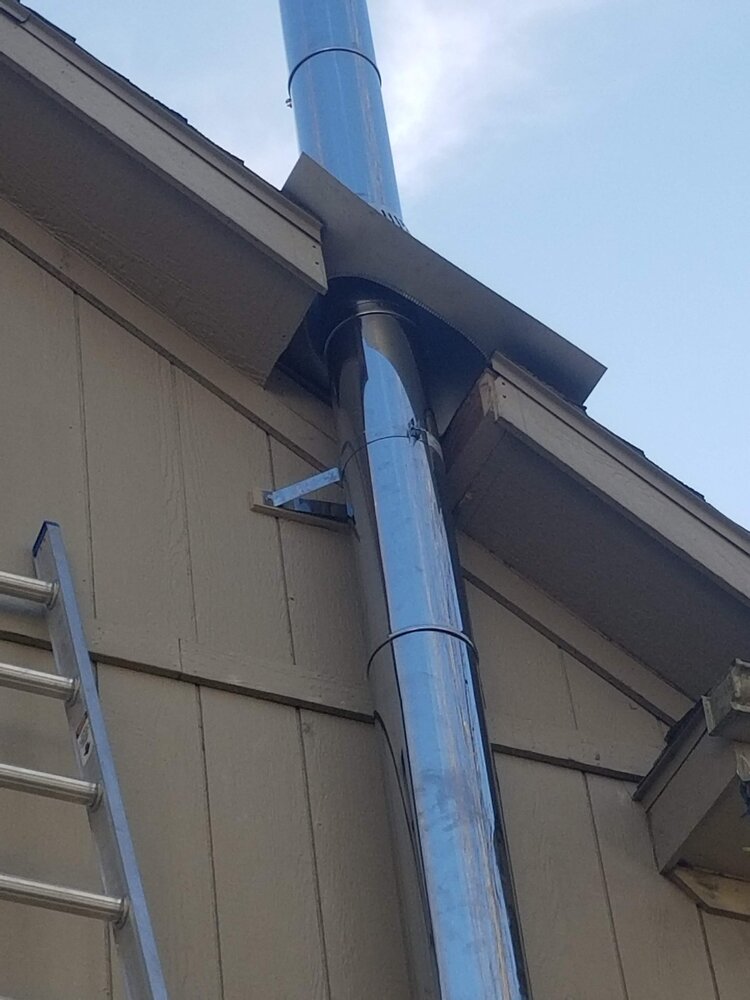 I have an 8:12 roof pitch so needed to extend the chimney a minimum of 104" above the roof to meet the required 2' vertical clearance from a 10' horizontal obstruction. I was just over this with using all 3' standard chimney pieces for a total of 24' from tee. Per my chimney manufacturer if the chimney extends over 5' from roof you need to install bracing. These are adjustable in length and simply attach through your roof to rafters. I tried to calculate where I thought my rafters were for both of them and installed one of the supplied lag screw in each. I then went into the attic and verified I had missed the rafters and measured how far over I needed to move to hit them. I pulled out the lag screws and adjusted their locations. At this point I did hire a roofing contractor to come seal up the flashing and patch my lag screw holes I had created. I wanted to make sure everything was sealed up tight and wasn't a fan of working on that steep of a roof slope. 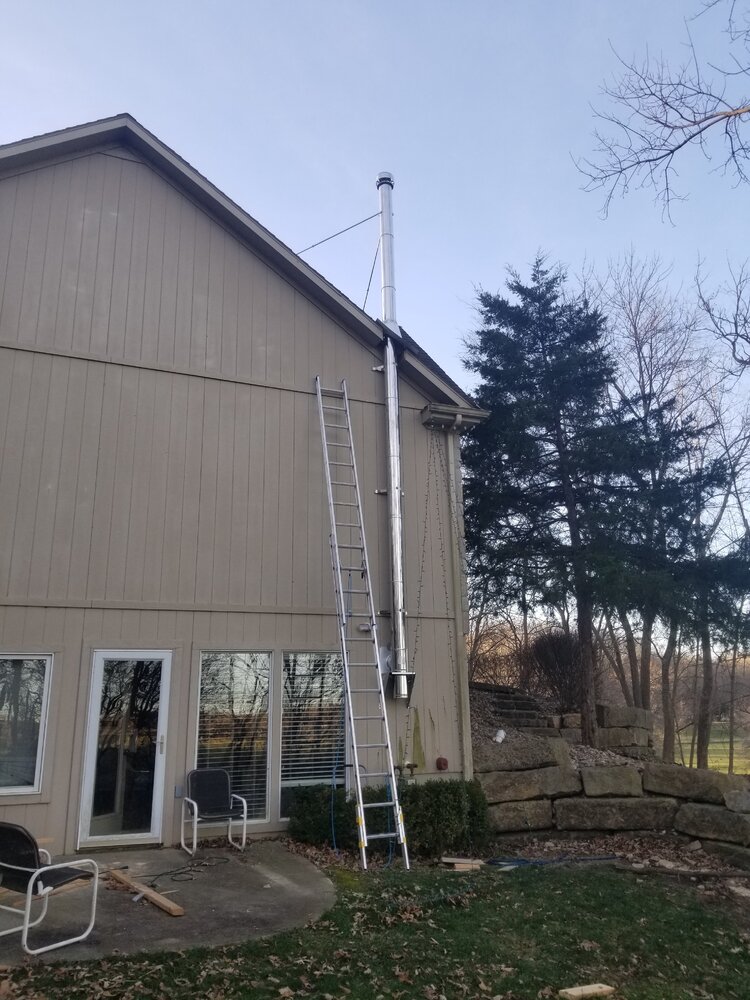 Last, I had to extend out my soffit as my required clearances landed right on the face of the existing soffit. I simply attached another trim board to the existing soffit and then bought a roll of aluminum flashing to use for under the soffit. 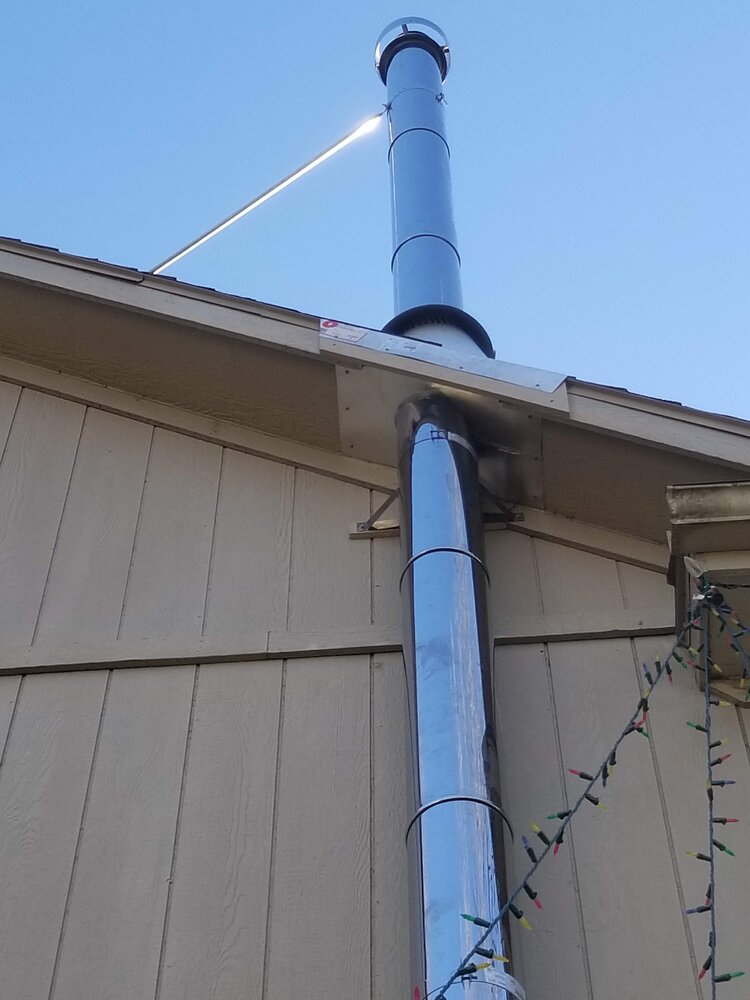 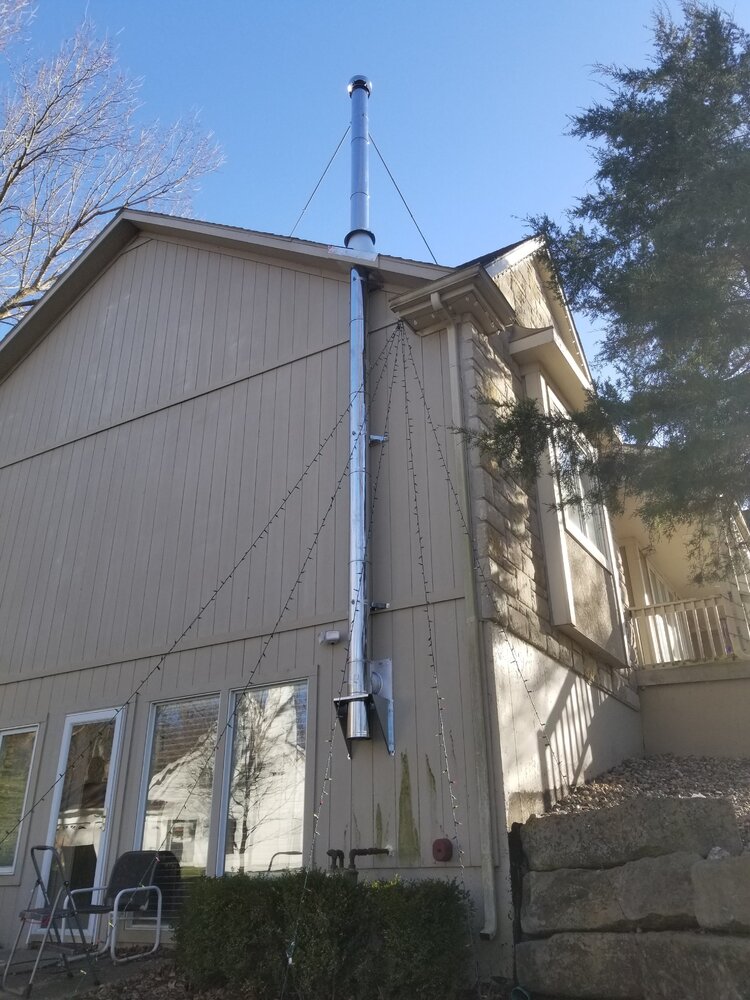 That wraps up the chimney installation minus paint and I will follow up once my stove gets delivered for the remainder of the inside work. I am getting a Quadra-fire 4300 step top stove but the earliest I can get it is not for another month.
Last edited: Dec 22, 2020

Nicely done. Have you checked the draft. Is it fairly strong?
Toggle signature
PE Alderlea T6, Jotul F602
The most important tool in the wood burning process and the largest variable is the one that is running the stove.
M

begreen said:
Nicely done. Have you checked the draft. Is it fairly strong?
Click to expand...

I have not and am not real sure on how to best do that. I currently have the bottom clean out plug on the inside of the house to close things up. Its supposed to be 60 degrees here today so don't expect there to be much air moving through it. If you have any recommendations on how to check draft I would love to hear them.

It looks like it will be getting colder soon. An informal test would be to cap the tee bottom and light some incense or a cigarette near the interior thimble opening. Is the smoke sucked right up? You could also tape a bit of toilet paper to the top of that opening to see if it gets sucked into the pipe or the reverse.
Toggle signature
PE Alderlea T6, Jotul F602
The most important tool in the wood burning process and the largest variable is the one that is running the stove.
Reactions: mwbauer
You must log in or register to reply here.