Turned 50 years old last month and my doctor and I thought a great way to celebrate the milestone would be with my first ever colonoscopy . . . I decided to keep track of my "progress" on Facebook.


July 20, 11:45 a.m.: Hmmm . . . my beef broth for breakfast was not as filling as I was hoping and the chicken broth looks quite different from the picture on the front of the package which shows a stew laden with carrots, potatoes and chunks of chicken vs. something that looks like used bath water. At least it tastes like chicken soup . . . minus the good stuff. And to think just two days ago I was eating smoked brisket, ribs and a loaded baked potato. How far I have fallen . . .


July 21, 2:33 a.m.: Well it's been a solid 4 hours since I last was forced to once again reexamine the wisdom in my frugality when it comes to buying the cheap two ply toilet paper. At times like these suddenly the 32 cent difference in cost between the wafer thin paper I usually buy and the cushiony cloud like paper I normally eschew as an unnecessary expense doesn't seem like such a bad deal.

In any case, here I am four hours later and I've ponied up to the proverbial bar for another few rounds of Gatorade/Miralax shooters . . . poop shooters? This strikes me as mildly funny . . . but then again it could be a serious lack of sleep as I have not been intimate with my Glacier Bay N2316 toilet for close to four hours . . . but then again I feared drifting into too deep a sleep less the urge from the nether regions strike . . . and so it was a very restless sleep.

Round one has gone down -- cherry glacier . . . an apt description I suppose for anyone who has actually seen glacier run off -- a milky, opaque slurry of fine silt suspended in water frozen for eons. The similarity between my Gatorade/Miralax concoction in cherry glacier and an actual glacier run off is remarkably similar in look.

Oh heaven above and hell below . . . I think it's starting again as I feel the renewed stirrings in my loins . . . and not in a good way.

Based on my experience mere minutes ago, I believe I am about to once again have the chance to have a bit of deja vu from earlier today . . . well technically yesterday . . . time is kinda getting a bit blurred and is now being marked out with shots of Gatorade/Miralax and sheets of TP.

For once I wish I could say this is all a result of poor choices on my part . . . but alas . . . it's all part of growing older and reaching that magical milestone of 50 years of age. My protruding abdomen however . . . that's on me . . . and choosing Ben and Jerry's over a kale smoothie over the past 50 years.

This morning my arse is rather tender which is not surprising since my last post I have headed to the bathroom for the 10th, 11th, 12th, 13th, 14th and 15th time.

I wish I could say it is my propensity to exaggerate and toy with the truth to make a more engaging story, but alas . . . this is the complete and honest truth with not a whiff of exaggeration.

Where all of this is coming from I know not . . . it seems as though there is no way I could have drank or ate this much . . . surely it must be coming from a mysterious fifth dimension.

In any case I wish I could say the process is slowing up, but it seems as though I sit, do my business and after a goodly amount of time of no action get up . . . lie down . . . only to be struck by those now all too familiar pangs . . . which in fact the stirrings of which I am feeling now even as I type these words.

I fear dear friends that the end is far from over.


July 21, 7:14 a.m.: What in God's green earth have they given me that has turned my insides into liquid lava?

Number 16 and no signs of slowing . . . if you see a car parked alongside I-95 this morning you may NOT want to stop to see if I am OK.

As others predicted here everything else went pretty well . . . the nurse did poke me three times before giving up and having another nurse do the IV (not her fault . . . I suspect after last night there wasn't much fluid on board.) I told the second nurse she was a Green Beret Nurse . . . but almost immediately regretted not knicknaming her the Ninja Nurse for her IV skills as it would have had a much better ring to the name.

Great folks at St. Joseph's . . . although a buddy of mine said they offered him a blueberry muffin afterwards. No muffin for me unfortunately.

In any case, I ate lunch at Wendy's . . . came home and have been sleeping things off. I still feel a bit groggy.

I’ll have to try mixing in some Gatorade the next time I have to choke down the Miralax, in about 2 more years from now. The last time I drank it I could hardly put it down and I didn’t quite finish it all But I was cleaned out good. Good to hear you had no polyps meaning you have 10 years until your next screening.
P

I had my second round last year (60) with no issues so its one more round in 9 years. I will take the discomfort of the prep over food poisoning

. Apparently younger people are getting colon cancer at a much higher rate these days and there is discussion about having the first check up one 10 to 20 years earlier. Those early cases tend to be more aggressive and without testing its usually too late by the time symptoms appear.
Toggle signature
Burnham Wood Boiler, 550 gallons un-pressurized storage, VC Defiant (mostly retired), PV powered solar hot water, 4,770 watts of solar grid tie electric, cold temp mini split heat pump and Unimog to haul the wood
Reactions: thewoodlands

My wife suggests finding a doctor that will do a capsule colonoscopy. It sounds a lot better to me to eat and pass a camera than the traditional method.
Toggle signature
Squirrel Power
- Morso 2b Classic
- Tim Sistem North Wood Cookstove (with DHW coil)
Reactions: vinny11950

Jake, glad you are okay.

Other than that, I don't like the looks of the Glacier Bay I have in the half bath, but there is something about the positioning of the bowl that makes it very easy to go.
Toggle signature
2010 Enviro M55 Steel in the livingroom
New 2006 Ducthwest 2460 small in the basement waiting to install

The official drink for 2020 is a colonoscopy prep.
Toggle signature
PE Alderlea T6, Jotul F602
The most important tool in the wood burning process and the largest variable is the one that is running the stove.
Reactions: firefighterjake

SpaceBus said:
My wife suggests finding a doctor that will do a capsule colonoscopy. It sounds a lot better to me to eat and pass a camera than the traditional method.
Click to expand...

They knock you out for the screening, you won’t even know what’s going on thank goodness. 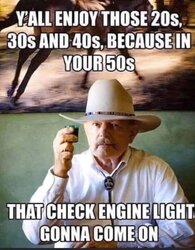 By sixty the light has a tendency to stay on. By seventy you've put some black electrical tape over it.
Toggle signature
PE Alderlea T6, Jotul F602
The most important tool in the wood burning process and the largest variable is the one that is running the stove.
Reactions: firefighterjake, johneh, vinny11950 and 2 others
P

I talked to couple of doctors and they said the capsule camera approach is better than not doing any screening but nowhere near as good as the normal approach. Insurance companies would normally jump on a way of saving money but most pay for the standard test with no deductible as the alternative is very pricey to treat with not great outcomes. When the doctor is doing the normal method they can remove any polyps they see and grab a sample for a biopsy. With the capsule camera that requires similar prep, if they see anything suspicious its another round of prep and then the normal method. Its not unusual for doctors to find benign polyps. I know our local hospital has figured out a way of doing it assembly line, they book a room with a specialist and run a lot of folks through in a row. No pre-consultation and when you leave you have the results and recommendations.

12 hours of inconvenience for every 10 years probably not a bad tradeoff and after going through it the first time I was ready for it the second time. Just think, some folks do bowel cleanses routinely by choice.
Toggle signature
Burnham Wood Boiler, 550 gallons un-pressurized storage, VC Defiant (mostly retired), PV powered solar hot water, 4,770 watts of solar grid tie electric, cold temp mini split heat pump and Unimog to haul the wood

Checkups are worth the hassle. Indications were something wrong with the appendix. MRI verified an appendix the size of a brat. Health care is a wonderful thing.
Toggle signature
Oslo F500
Stihl 026

My first was at 45 due to family history. Mom and uncle had colon cancer. One had ascending colon removed. Other, transverse colon.

C
Clancey's thread believe it or not...