I recently purchased a home in upstate NY built around 1975 that has a large masonry fireplace. I had the chimney inspected shortly after closing - the inspector swept the chimney and confirmed that everything looked good.

Since then, I've had about 5 fires with kiln-dried hardwood and each time the house smells very smoky during and after the fire. One time it was so bad that the air was visibly smoky and our smoke alarms went off. After the first smoky fire, I read up and have done all these things:

- made sure the flue was wide open before starting the fire
- pre-heated the open flue with a piece of rolled up newspaper
- cracked a window in the room
- used the 'top down' method of burning
- kept wood toward back of the fireplace
- kept glass doors shut for most of the fire (if I open them, the smoke gets much worse)

I called our inspector back to ask if he had any tips, but he didn't say anything I hadn't already tried.

There are two things that make me suspicious about the fireplace: 1. it has some kind of u-shaped heat transfer thing inside of it that partially obstructs the flue, 2. there is a small gap between the fireplace face and brick near the top (see pics). The inspector said that if the chimney were drafting properly neither of these things should be an issue.

Wondering if anyone has thoughts / suggestions about how I should try to debug this situation. 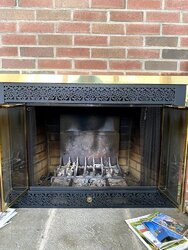 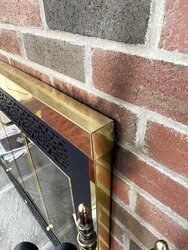 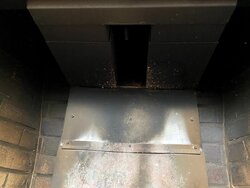 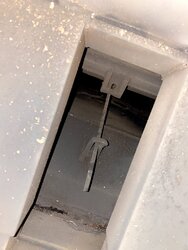 Could be the heat scavenger. I'd remove the aftermarket heatexchanger and put in an efficient insert with a full stainless liner.
Toggle signature
PE Alderlea T6, Jotul F602
The most important tool in the wood burning process and the largest variable is the one that is running the stove.

I assume that heat exchange device was added at some point. I would remove it and see if the fireplace drafts better. Many fireplaces just do what you have. Maybe something being done to the chimney height may help.
Toggle signature
Tom

When we first moved I was excited to burn the fireplace. Our experience was similar to yours. I found out that I am pretty sensitive to wood smoke. We had plenty of draft, less than ideal design. Our cheap solution was ethanol burners. It’s not a wood fire but it’s a flame and no smoke. We probably used them for four years burning 12-24 Liters a year. We liked the fires enough that when finances allowed we installed a wood stove. We really like it lots of heat almost no smoke pretty flames. If we had LP or natural gas I would have gone with a gas stove I think. Wood is a lot of work and mess. Totally worth if you have the time and energy. Sorry I’m. It more helpful.

Here is the link to the burners we used. I set them up with gas logs in the basement fireplace but have het To light them. three of the 1400 series burners burn enough to warm up the space and and 1 Liter split between three burners would last 45-60 minutes. https://www.ignisproducts.com/ethanol-fireplace-burners/ethanol-burners.html

Rip out that heat exchanger. It presents a major restriction right under the smoke chamber and I can guarantee you'll see an improvement without it. Even with a strong draft, just the turbulence caused by that thing will send some smoke out into the room.

How tall is the chimney? Do you know the flue interior dimensions?
Toggle signature
VC Encore 2040
VC Intrepid II 1990

Thanks all - I appreciate your suggestions

@kennyp2339 yes - the cleanout door has been closed for all fires

@gthomas785 I'm not sure exactly how tall the chimney is, but it extends about 2-3 feet above the top of the roof line at the highest point of the 2 story house. not sure about flue dimensions either - I'll measure after I take the heat exchanger out

Hard to tell for sure, but that chimney cap looks kinda low and could be impeding the draft as well.
Toggle signature
VC Encore 2040
VC Intrepid II 1990

Update - I removed the insert and lit a fire after warming the flue. Unfortunately smoke still billowed out into the room so it's definitely an issue with the chimney not drafting enough. Attached is an image of the fireplace as it is now, a closeup of the chimney cap (the best I could do), and a video of my smoky fire today

I'm going to see about getting a new chimney cap, and I may try installing a 4" 'smoke guard' at the top of the fireplace

If anyone has other suggestions, please let me know - I appreciate it! 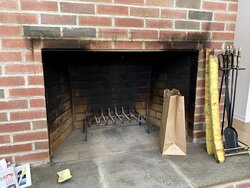 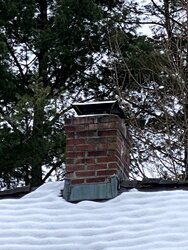 I still think your chimney cap could be part of the problem, but sometimes fireplaces are just poorly designed.

You did try opening a window, right? Not just a crack - make a window opening at least the area of your flue - that will rule out any negative pressure issues.
Toggle signature
VC Encore 2040
VC Intrepid II 1990
R

I know this is a month late response , but did you fix your problem? It looks clear that your damper is placed too low. Codes require the damper to be placed 8 inches above the top opening. Your fireplace is kind of like a slanted rumford and based on what I see the geometry of your fireplace, though not ideal, is still very good. It is much like the fireplace speced in BIA 19C document on fireplaces which require 12 inches to damper. My own rumfords have 16 inches to throat opening which I think is ideal. The smoke guard should help which is essentially raising your throat opening and reducing your face area. This is the easy fix.

If it were my fireplace I would consider operating in the throat area by removing the damper and see if I could raise the throat. To do this you might have to cut out brick on the breast wall and add brick to the back wall. If you can't use the same damper, a new damper can be as simple as putting a 1/4 steel plate on a horizontal lip on the inside wall of the fireplace breast, a rest a thick 4 by 4 angle iron on the back wall, lay cut angled brick to fill in the the throat sides. Your throat opening need only be 4 inches wide. You could even use a short rectangular stick/bar, etc., or object to prop the throat open, or weld a damper arm to the blade and hook to the 4 by 4. All this being said, I would be good to have more exact pictures and measurements, and info on the smoke chamber , to make sure there are no other problems but I feel certain it is too low of a throat position.
M

ncherro said:
Update - I removed the insert and lit a fire after warming the flue. Unfortunately smoke still billowed out into the room so it's definitely an issue with the chimney not drafting enough. Attached is an image of the fireplace as it is now, a closeup of the chimney cap (the best I could do), and a video of my smoky fire today

I'm going to see about getting a new chimney cap, and I may try installing a 4" 'smoke guard' at the top of the fireplace

If anyone has other suggestions, please let me know - I appreciate it!

Great video ...that video looks like start up when the smoke came out. Try lighting a fire with kindlin first and no wood and just add small pieces and build up the fire...then after you get coals with kindlin try adding small log....and so on...Preheat your flue longer...what was the temp inside the room and outside.. also crack a door or window and see if it does it help....if it does smoke at start up...let it die out wait 2 hours or so... and try again and heat the flue longer. put a space heater under there and hair dryer or heat gun.. just to eliminate cold flue syndrome.

How old is your wood and how long has it been completely covered and dry?

The Hearth Room - Wood Stoves and Fireplaces Monday at 12:21 AM
BigJ273

What Insert to fill in 4x6 feet wide Fireplace?

B
Newbie to fireplaces and need help!