Sorry, lots of info to try to explain. I am not a HVAC tech. I have a background as a trained auto tech and I've remodeled a couple houses.

This unit is installed in a studio apartment at the inlaw's, where we've lived the last two winters. It is the primary source of heat but has to be supplemented by electric heaters in MN winters.
The unit in question is a Vermont castings DV25 Stardance. Its a 25,000 btu unit. It is running on propane. I'm told it has never put out enough heat to warm the 20'x20' studio apartment and that it was a disappointment from the start. It does have a blower that turns on automatically when the unit gets warm. The inlaws had it installed about 10 years ago when they moved in. They've had 2 techs come out to work on it over the years. Neither one was able to get the thermostat working(I replaced the thermostat with one that has a battery and now it works.) One tech broke the glass and inlaws had to cover the cost of that. I can see from the paperwork the gas valve was replaced in 2012 at a cost of $362. Nothing made it put out more heat.
You can see my reluctance to call a tech again, it's a small town, not too many options.
The new gas valve has a sticker that reads lo .9-hi 3.5, but the adjustable knob on the front says 2.8-11 WC so I believe it was converted to LPG correctly. I bought a Manometer and am reading 11 WC input pressure and up to 10.2-10.3WC output pressure, BUT sometimes the output drops slowly to 8.6 or so and then shoots back up to 10.+ I'm not sure if the input varies too, I didn't test it as long.

Complaints:
Seems like it should put out more heat/ doesn't seem to get hot enough. How hot should this unit get? As it is now I can place a candle on top of it and it will never melt/get soft.
The unit doesn't always run when it should, and it shuts off sometimes. After I got the thermostat working I thought that it would run when it should at least but I noticed that sometimes the big burner (main burner?) wouldn't be on when it should. If I hit the piezo sparker sometimes this will make the main burner come on, even though the pilot is already on.

Sometimes with the big burner running it makes a soft popping sound, like popcorn but quieter. This can be intermittent or almost constant, but again not very loud.

I'm concerned that when it isn't running, but should be, that not burning LPG is running still and costing me money for nothing/and is dangerous.


As I write this the fireplace is to my left and the manometer is on the output pressure test port. The fireplace has come on and off three times in the last five minutes and the pressure has gone to 0 when the flame goes out. The hi-low knob is ALWAYS on high because on low the flame is weak and I think the shutting off problem is worse.

Your 25K BTU unit is putting out about 18.7K BTU.
If there is little insulation that may not be enough
to heat it efficiently...How well insulated is the studio?
Expand Signature
Bob
Pellet Pig, 2 tons Curran hardwoods on hand
P43 & P61A Worshipper
Gas Geek
F

DAKSY said:
Your 25K BTU unit is putting out about 18.7K BTU.
If there is little insulation that may not be enough
to heat it efficiently...How well insulated is the studio?
Click to expand...

Thanks for your response.
Hard to say about insulation. I’m told this was a contractor’s house that he built himself, and messed a lot of things up. I can see about six inches of insulation above the ceiling, hard to tell with the walls.
Maybe I’m expecting too much out of this unit. I wish I could get more heat out of it. I don’t like to rely on the electric heaters so much, the electric bill is outrageous already.
F

Is there any way to put a bigger burner or something in this thing?

step up to a used radiance?
U

Can you post a picture of the unit in operation after it has warmed up? I have a DV25 in my living room and it keeps the entire upstairs warm at 70 degrees F unless it is cooler than 15 degrees outside. My upstairs is about 32 feet by 20 which includes the kitchen. It will melt candles easily.

As far as the intermittent turning off and then on, I had that problem with mine. The cause is a poor connection resulting in high resistance in the switch on top. When my switch was is thermostat mode that would happen. I removed the switch and exercised it. I powered a small 12V light bulb through it and switched it on and off a hundred times. The current of the bulb along with exercising it cleaned the contacts and the bulb would not dim intermittently any more. After reinstalling the switch I never had that problem anymore..
U 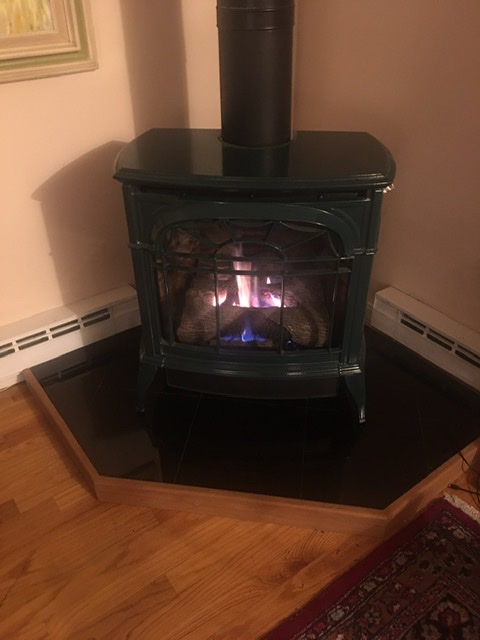 It looks like you’ve got a bit more flame. Ours has ran all night and the top is reading 93f with my infrared non contact thermostat, the cat likes to sleep on it. Thanks for the tip on the switch, I’ll probably just try to find a replacement.
F 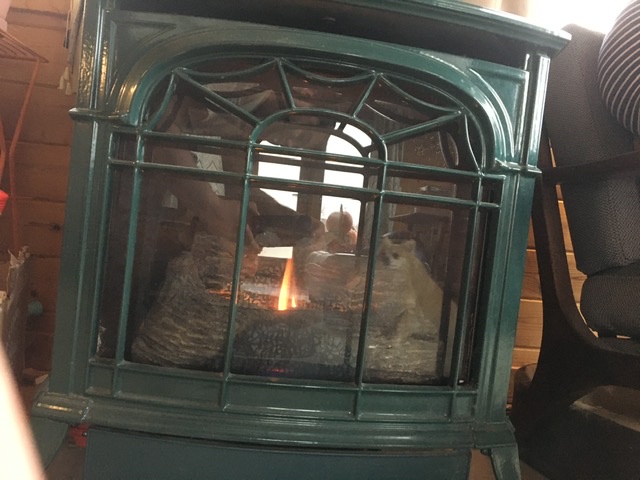 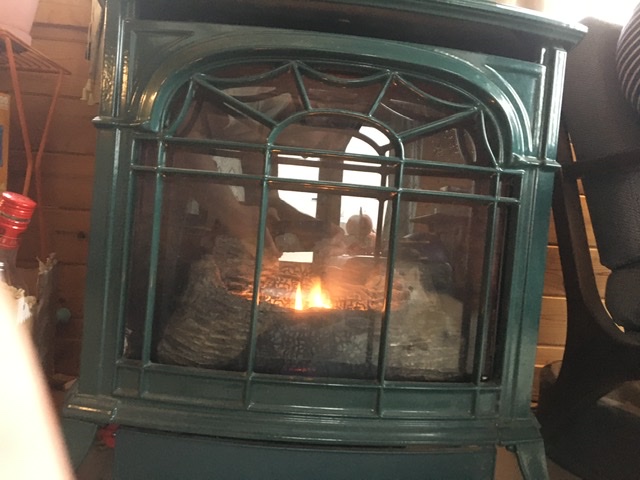 *spot the dog reflection
U

Hi... your stove certainly doesn’t have enough flame to heat properly. If you are measuring 10” WC pressure ...it seems normal for propane. My guess is that something is plugged up in the burner assembly. The burner slot nearest the pilot is not providing enough propane for the pilot to ignite it.

Besides it not heating well the small flame may not be producing enough draft for the direct vent to draw enough air into the unit or vent properly. I

Your stove looks like it’s in good shape. They are beautiful when working right. It’s definitely worth taking apart and cleaning out the burner checking for blockage in the line to the burner before throwing the stove out.

What’s nice about the DV25 is that it has a firebox that just sits in the stove frame. Once the fuel line and vent pipe is disconnected from the stove, remove all the wires to the switch , valve and thermostat (don’t forget the safety switch pull wire & pin ), you can lift the firebox out and put it on a table to work on it.

I think I know why you are having issues with thermostats as well. The gas valve (Millivolt gas valve to be more exact) operates on about 1/2 Volt DC from the thermopile. That low voltage can only be used by the simplest of simple thermostats. I use the round Honeywell thermostat with a mercury capsule switch. There are also non mercury ones as well that use a simple contact switch instead of the mercury switch. You can not use a 24 V electronic thermostat with a millivolt gas valve. It won’t work. The reason why your battery operated thermostat works is that it has a relay closure as a contact. The relay closes the circuit the same way the mercury switch in my thermostat allowing it to work with a Millivolt valve.

The DV25 is simple enough to work on. Take your burner apart and look for insects, rust or other crud that’s blocking gas flow. I took mine apart as well and I remember taking the burner plate off. I’ve used my DV25 s as the primary heat source upstairs for 10 years now without any issues..
F

When you say burner you mean the flat plate with all the holes in it that the logs sit on?
I was in there last year when the glass spontaneously shattered. I cleaned up the outside but didn’t disassemble the burner.
I could pull it apart and take a look.
M

I would take the burner out and then take the burner orifice out, possibly even the entire line from the valve to the burner and look for spider nest.
Expand Signature
Jotul Oslo
Jotul Allagash B vent
Jotul Sebago B vent
37 ton ruggedmade splitter
U

That’s an excellent point. If you have an extra “generator “ tube from a Coleman gasoline lantern, you can pull out the center piece with the “needle” or “ prick wire” and use it to clean the orifice. Most likely the needle from a gasoline lantern is 0.006” diameter and will not enlarge the orifice, but will clean out any corrosion or obstruction. With the 10”WC propane pressure.. at this point what else could be wrong? There must be something blocking gas flow...
M

Ultralume said:
That’s an excellent point. If you have an extra “generator “ tube from a Coleman gasoline lantern, you can pull out the center piece with the “needle” or “ prick wire” and use it to clean the orifice. Most likely the needle from a gasoline lantern is 0.006” diameter and will not enlarge the orifice, but will clean out any corrosion or obstruction. With the 10”WC propane pressure.. at this point what else could be wrong? There must be something blocking gas flow...
Click to expand...

I don't know about any of that coleman things you are talking about. Use pipe cleaner, small screwdriver. Whatever you need to clear it out.
Expand Signature
Jotul Oslo
Jotul Allagash B vent
Jotul Sebago B vent
37 ton ruggedmade splitter
M

Millbilly said:
I don't know about any of that coleman things you are talking about. Use pipe cleaner, small screwdriver. Whatever you need to clear it out.
Click to expand...

After reading this again I think you are getting the burner orifice and pilot orifice mixed up.
Expand Signature
Jotul Oslo
Jotul Allagash B vent
Jotul Sebago B vent
37 ton ruggedmade splitter
U

Kind of an odd question for this forum but, the geo thermal heat at the big house (in laws residence) has gone out after being a pita since the beginning.
They're taking out a loan to replace the system. They want to fix the heat in the apartment while they're at it. The fireplace here has always been disappointing. They don't know what to replace it with.

It's a roughly 20x20 square space with about a nine foot ceiling with a 25,000 BTU fireplace that does not put out near enough heat.
What would you replace it with?
A bigger LPG fireplace that actually has enough BTU's to heat the place?
Some other kind of LPG heat source?
Electric heat?
AC would be nice, how about one of those mini split units?
M

How is the area insulated? Pics of the unit running? That is not a big area to heat.
Expand Signature
Jotul Oslo
Jotul Allagash B vent
Jotul Sebago B vent
37 ton ruggedmade splitter
F

Millbilly said:
How is the area insulated? Pics of the unit running? That is not a big area to heat.
Click to expand...

The building is pole barn construction, I think 2x6 or 2x8 walls which are fiberglass insulated, ceiling is fiberglass insulation. The big killer is the floor I think. It’s cement slab and the inside floor temp around the corners/sides is 45-50f.
Pics of the unit operating are above.
You must log in or register to reply here.