Hello, first time post for me. We bought this 1955 split level a few years ago that has 2 fireplaces. One is standard, but this second one is extremely awkward and I need help to make it usable. I've done a level 2 inspection and the good news is it has never really been used. Clay tiles look great with a bit of water damage on the top. Now the bad....

I've uploaded a picture so you can see how the fireplace comes out of the wall. The flue then bends sharply at probably a 45 degree angle and then shoots straight up. The opening to the flue is tight and the sharp bend causes the smoke to collect and come inside the home. Our neighbors have the same fireplace and have all told us it is unusable for wood burning due to the smoke collecting and the backdraft.

We would like to put a wood insert as we like it over gas. My question is how or what can we do to accomplish this? Can a wood insert use a metal liner with a fan to push the smoke out?
Can we get rid of that metal post? It moves slightly but I don't know if it's just a cover for a beam inside? Has anyone seen or dealt with this style of fireplace before? What are your suggestions to retain this to wood? Can we use a metal liner with a fan without an insert?

Thanks for your help!

WisdomTooth said:
Can a wood insert use a metal liner with a fan to push the smoke out?
Click to expand...

WisdomTooth said:
Has anyone seen or dealt with this style of fireplace before?
Click to expand...

So doing something like this is out of the question? 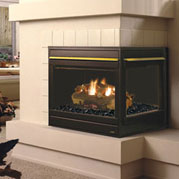 That looks to be a zero clearance fireplace you could not retro fit it into yours. I am sure you could get a custom set of doors made but that wont make a badly designed smoke chamber and flue any better
Toggle signature
Regency 3100 in basement
cawley lemay 600 sold
member of pa guild of professional sweeps
J

Dang that's some bad design work. Corner fireplaces can work if properly constructed but seldom do you find one that is.

Your best bet is as bholler suggested. Put a side wall on it and then an insert may fit. With an 8" brick return to wrap the post it looks like that will give you a 32" opening for an insert. I'll assume it's possible to find an insert that size. Or with a side wall for support the post could be removed if desired.
You would also need a hearth of some sort. Nothing you have now meets any codes. It's a good thing they don't work as is.

As long as a metal liner can be fished down the flue you should be good to go. No fans are required. The smoke is a result of improper design and workmanship. An insert and liner will bypass all those mistakes.
Toggle signature
Progress Hybrid
Jensen 30A
550 XP with Stihl RC chains
The only way to fly

Just as an option that has not been discussed:
I have had to deal with many of those fireplaces on Long Island. you do NOT remove the post, from what I have experienced. Now, on some with drafting issues, we installed an "L" shaped glass door. Normally by a company called "Stoll". The short end was a fixed panel, the long end either bi-fold or a twin door design. By closing off the short end (while being able to enjoy the view of the fire at the same time) it reduced the ratio between SF of opening, chimney length, cross section, etc. In short, making the chimney work less to draw the smoke out. Some folks could enjoy the fire with the long doors full opened, to get the radiant heat and hear the crackle, some with bifold doors left the doors partly opened.

There were two cases, both on the bay, where the doors helped most of the time but the customers wanted perfection, so we went back and installed exhaust fans at the top of the chimneys. VERY expensive and with the salt air, they had to be replaced in 5 years or so. But, these North Shore dwellers wanted the fireplace look and perfect performance with the flip of a switch. So we gave them that.

In regards to the water damage, Im sure the sweep recommended sealing the chimney outside?
S

Been lurking for awhile, but came across a solution a little while back so I figured I would share. Take a look at fireplace xtrordinair. I came across this on their facebook page, and found out they will make custom panels for their inserts. I believe both wood, and gas units. If the flex vent can fit through the chimney it should work just fine. 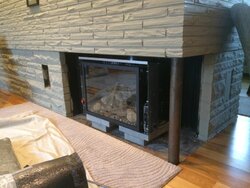 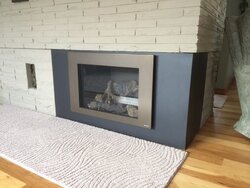 That is a unique fireplace, never seen one with a steel corner post. Do not remove that post.
Good luck with making a wood stove work there, I hope it comes out well.
Toggle signature
Stihl 039 Ochsenkopf aluminum wedge
1998 Nissan Frontier 4WD
Sotz Monster Maul
Jotul Oslo
J

Just to clarify. The corner post is indeed structural. It can be removed if you wish to brick in one side. A small bottle jack strategically placed is all that's required. You may find a one sided insert that clears that post or you may wish to gain a few extra inches by removing it.

And while glass doors in front and a solid glass panel on the side may get that fireplace to work as is I usually wouldn't recommend attempting it. Custom glass is expensive and no guarantee it will work satisfactorily. Two, if they cut corners building it in the first place who knows what dangers are lurking out of sight. I've seen a lot of dangerous stuff built from the fifties.
An insert with liner offers a big safety advantage.
Still need a hearth of some sort for wood burning. I'll leave that to the experts on metal appliances to determine what's required.
It seems gas units do not need a hearth?
Toggle signature
Progress Hybrid
Jensen 30A
550 XP with Stihl RC chains
The only way to fly
W

Thanks to all for your input. I would agree an insert with a liner would make the most sense. I've taken into consideration your input and definitely will bring up your points when shopping around. Thanks, and i will post an update when I get this project underway.

T
Does a masonry fireplace + chimney need to be in good shape for an insert or wood stove?

The Hearth Room - Wood Stoves and Fireplaces Nov 11, 2022
bholler
B
B
Converting gas fireplace to woodburning with some uniqueness...

The Hearth Room - Wood Stoves and Fireplaces Nov 16, 2022
bholler
B
R
Fix fireplace, not use an insert