Good afternoon y'all and Happy Thanksgiving!

So I was a member here a MILLLLLLLION years ago putting a wood stove in my trailer. I'm now moving into a house that has a gorgeous fireplace that I want to get an insert for, and also redo in a limestone (manufactured) veneer (similar to this https://www.homedepot.com/p/Veneerstone-Austin-Stone-Bisque-Flats-10-sq-ft-Handy-Pack-Manufactured-Stone-97334/202189760?MERCH=REC-_-pipsem-_-202189763-_-202189760-_-N#product-overview?)

Any idea what I should expect to pay for such a project? It's pretty much the only improvement I want to do to the house so it's my one "splurge."

Also, does anybody have a good company/contractor in San Antonio/South Texas they could recommend? 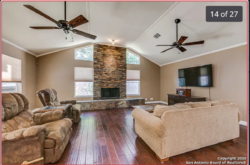 Is that a full masonry fireplace, or is it a pre-fab metal box? If it's the latter, it might not be so easy to put an insert in, but it sounds like you're interested in possibly doing some pretty major work in that area anyway. I'll pass along some good advice I got when I moved, though, which was to live in the house for a while before committing to major changes just to see if your priorities remain the same.

We moved not too far from San Antonio just about three years ago. We weren't sure when we moved whether we would even want wood heat in the climate, but it only took us a few months of fall and winter to know that it sure was unpleasant to be cold in our house. We finally got an insert installed last January, and we loved having wood heat in the home again. (We are a bit colder than San Antonio, but I think we just don't tolerate cold as well as we used to since we have moved down to Texas. I still don't love the heat, though.)

I never found anyone in the immediate area to help with figuring out an insert for our fireplace. There was a place in Seguin that I didn't really work with, but they might be the closest to you. I did find that Georgetown Fireplace and Patio up near Austin was willing to work with me, and through them two people came out to look at our project. One was a mason, but he never followed through with a quote on building an alcove for us. The other was a man who specializes in installing pretty high-end custom fireplaces. He wasn't interested in doing an insert, but he at least came out to assess what we had and to verify dimensions.

Once we figured out what we had and were allowed to do, we found that Georgetown could not order the particular line of stove that was the best fit for our application. We found an installer (Chris at the Fireplace Shop in Stephenville) who was willing to make the trip, and he did a great job getting an insulated liner down our chimney. The job ended up being more difficult than we had anticipated, and I don't know if he'd be willing to undertake such a journey a second time, but it wouldn't hurt to ask if you don't find another option.

The first thing to do, though, is get all moved in and live in the house, figure out what you've already got and then where you might want to go with it. It looks like a beautiful place. Congratulations.
Expand Signature
Current home: Enviro Kodiak 1700 Insert

Oh, good point about it being a pre-fab. It was built in 1993, so that's a definite possibility. We've been soooo warm this year it seems kind of ridiculous to put a bunch of money into a fireplace but I love them so much. I mostly want to convert it because they burn so much cleaner.
Last edited: Nov 22, 2020

I got nothing to add, but an "Nice to see you again, Rose

Dix said:
I got nothing to add, but an "Nice to see you again, Rose

I'm definitely redoing the stone, I got a ballpark quote from a stone mason that it would be $3500-4500, which is totally doable. I want to do that before we move since it'll be a big demo project.

I'm dithering about whether or not a fireplace insert would be worth the expense. Like I will probably be using this around ten times a year, when we have random cold snaps as a cozy ambiance type of thing. Not like I used it in my trailer in Utah as a source of heat for my whole home (besides, the chimney is exterior anyway, so it's not like it'd do a terribly good job of it.) I might just add glass doors if that's the case.

(That's what I miss about forums over Facebook. Way better smilies.)

I recently did something very similar; here's my install thread: https://www.hearth.com/talk/threads/drolet-escape-1800-insert-install.182495/

Fireplace stonework came to just a hair under $3k. I did the insert install myself; the insert, chimney liner, liner installation, and the other miscellaneous parts came to $2k. So around $5k, total.
Expand Signature
Drolet Escape 1800-i insert
1956 Willys Pickup firewood scrounging truck

I think I'm going to content myself with glass doors and the stone remodel.

RoseRedHoofbeats said:
I think I'm going to content myself with glass doors and the stone remodel.
Click to expand...