here is the hole with the crock and the double wall pipe (is this really Class A pipe? How can I tell the difference between class A thimble pipe and double wall chimney pipe?)

From the exterior of the metal pipe there’s supposed to be 2” to combustibles, right? The guy today said it can touch anything like concrete, the crock, anything ‘non-combustable’. I don’t know what’s in the wall along the length of the pipe.

We took some photos to try to show the gap. It’s pretty impossible to see the gap, but you can see the broken terra-cotta where the gap is. Is this ok? The guy who came today said he could feel silicone or something, he said maybe they fixed it when i didn’t see them...? I don’t think they did. Husband had his whole arm in that pipe checking and he felt nothing but the insulation sticking out from the cut metal pipe. 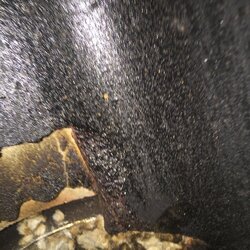 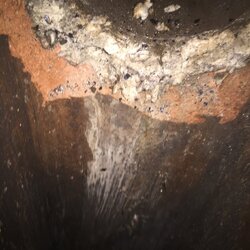 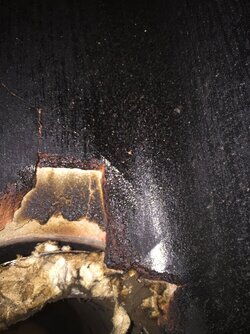 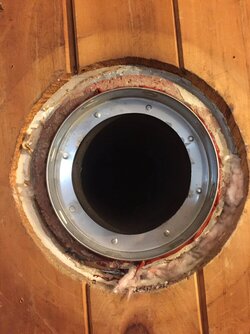 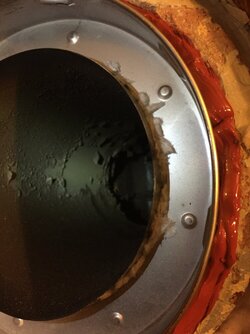 The other shop has confirmed my suggestions. There are a couple ways to solve this issue depending on what you and the current shop (Lou) work out. A proper and thorough chimney flue cleaning and then installing a full insulated stainless liner would be my preference. Either way, the clearance to combustibles needs to be resolved.
Toggle signature
PE Alderlea T6, Jotul F602
The most important tool in the wood burning process and the largest variable is the one that is running the stove.
Reactions: rosieXdox
R

would they remove the terra-cotta? or just slide the pipe into it?
How would they get the T in?
Would the straight pipe just end below the T, or continue to the cleanout opening much further down, and then just end as an open pipe? or have it’s own cleanout cap?
R

update-
the second attempt to resolve the gap between the terra-cotta flue and the chimney itself have been resolved. So far as we can tell.
a new piece of pipe was put in. an un-cut piece. 12” length. says ht103 UL listed chimney pipe typeA. hope that’s the Class A everything said it should be for this wall pass thru.
I’ll post pictures below.
one picture is of the crock once the cut piece of pipe was removed.
In this you can see the gap where there’s new soot developing showing that the air isn’t going directly and only into the flue.
This is the big concern for today.
The person who came is one from the crew who installed it. Not “Lou”.

next picture is of the super 3000 all smeared around making a seal, fixing the gaps.

Third picture is looking into the new piece of pipe into the wall and seeing those jutting out bits aren’t sticking infront of the chimney pipe piece.

He said they don’t put pipe into the flue. only up against it.
So having the masonry (super 3000) filled the gaps and provides, hopefully, the full closure allowing the air 1 exit, up the flue pipe, and not anywhere else. 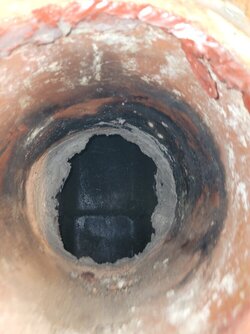 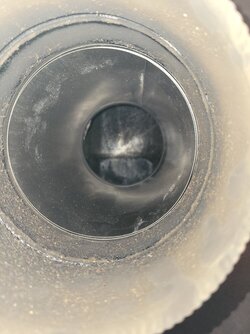 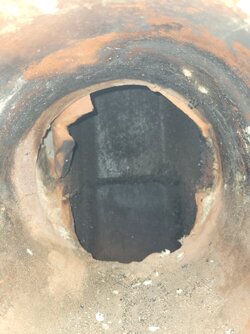 Is there anything i should mention to the inspector to be sure it is all safe?
B

Is there anything i should mention to the inspector to be sure it is all safe?
Click to expand...

You need to make sure there is 2" between the outside of that class a pipe and any combustible materials. You should also address the cracked flue tiles as well. This install is honestly very strange I don't understand why they didn't just use the proper product to start with.
Toggle signature
Regency 3100 in basement
cawley lemay 600 sold
member of pa guild of professional sweeps
R

i don’t know really why.
I was thinking maybe they thought “hey let’s do them a favor and just ‘make it work’”

but in reality we just want to be safe. and if they told me hey was can either “make it work” and save money now to fix it up to code at a later date, that would be at least removing confusion, for me. I want to know what’s going on, both so i can understand and also to learn and know what I am dealing with.
If i know it’s a “make it work” you can bet i’m going to watch it like a hawk.

if it’s up to code and perfect i know i could rest easy and watch closely, but not feel like every little noise is the house catching fire. you know?
R

Bholler i’ll ask the inspector when he is here tuesday if he can measure the clearances both of the class A pipe to the combustibles, and also of the wood stove to the things around it, since they just put it in (didn’t measure). My husband moved it further forward away from the wall. so it should be at minimum 9” now.
B

rosieXdox said:
Bholler i’ll ask the inspector when he is here tuesday if he can measure the clearances both of the class A pipe to the combustibles, and also of the wood stove to the things around it, since they just put it in (didn’t measure). My husband moved it further forward away from the wall. so it should be at minimum 9” now.
Click to expand...

Your inspector will most likely have no clue what is really needed. Most do not.
Toggle signature
Regency 3100 in basement
cawley lemay 600 sold
member of pa guild of professional sweeps
R

well I’ll measure it myself when i have it off for him.
R

inspection was today. He measured and asked questions and read through the manual from Lopi on the endeavor.
He answered questions. I showed him pictures.

at the end of the day-
the super 3000 is repairing the gap between the chimney flue and the wall passthru class a chimney pipe. (double wall chimney pipe)

The 2” clearing to combustibles i did ask about. He said the crock isn’t combustible. so it doesn’t count. He offered to take the whole thing apart and measure it for me to double check, but i showed him the photos and he said it looked good. Was most likely 2” or maybe more. From the edge of the class a to the nearest combustible which would likely be the insulation that’s visible on the lower right side of the crock/wall seam.


so far as i can tell we are operating it according to the manual. We are trying to do everything as safely and then as efficiently as possible.

I want to give a huge thank you to all of you who’ve been so kind, helpful and most of all patient while i muddle my way through this process.

The inspector was patient and did say that what i explained had happened sounded to him like they just wanted to bust through a job to get it done, maybe not right. he was surprised to hear that they hadn’t actually screwed the stove pipe pieces together at all. it was all just slipped into one another and left. even the piece that fits into the class a that just turns to lock wasn’t turned. so yeah. i asked if there’s a company he has 0 issues with and he named a couple for this area, but said they really are all about the same. He said this sounded like a weird 1 off type thing, maybe a bad crew, bad timing or something.

thank you all again so much!!
You must log in or register to reply here.