I mentioned on the garden thread that I have blueberries from my grandma's property. We jokingly called them plumb berries becuase the berries are so big. 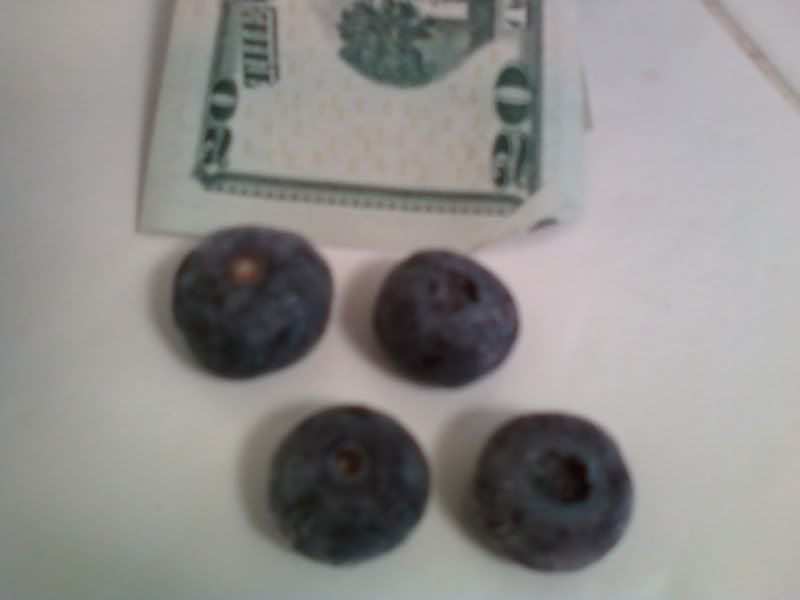 The poor plants would sag under the weight of their fruits and it was quite a job picking. Everyone in the family had a large supply of berries in their freezers.

She started them as cuttings back in about 1979 so they were well established. After my grandma passed away last fall, it was kind of a priority to try and get the plants out before the house was sold. My sister and I made an attempt one afternoon but shovels and a truck didn't get us very far. 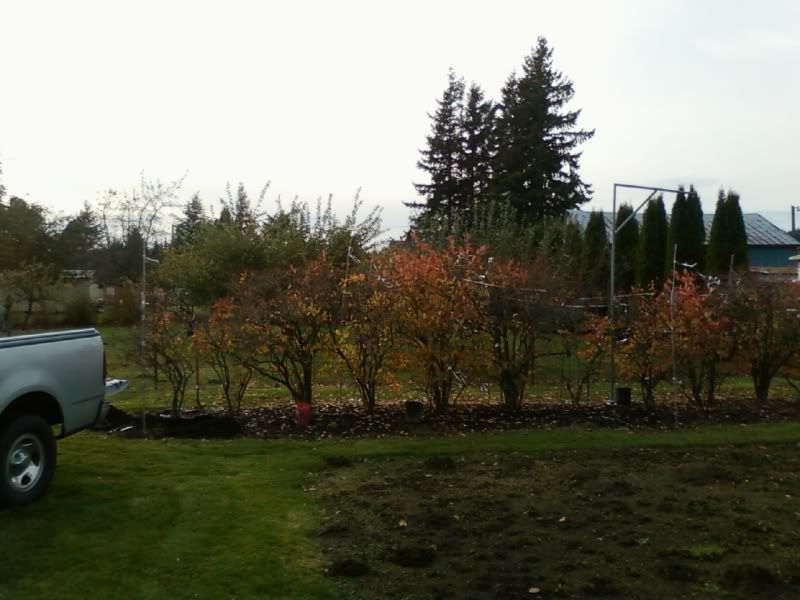 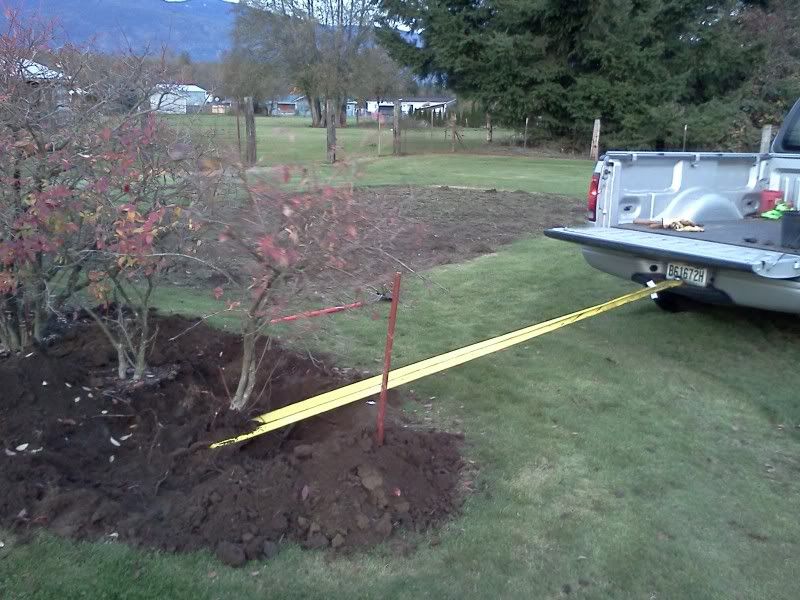 After A LOT of digging and a little pulling, the first two went easy, but the rest refused to move.

We had to return another day and call in the big gun. My grandma's close friend and neighbor has a tractor. I love the song "Friends With Tractors."
"Son you ain't got a thing on me. See, I got friends with tractors!" 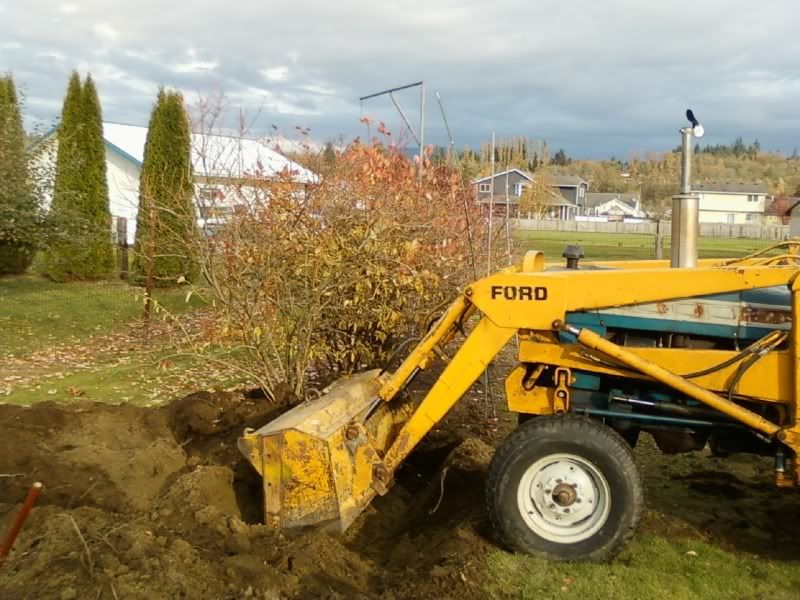 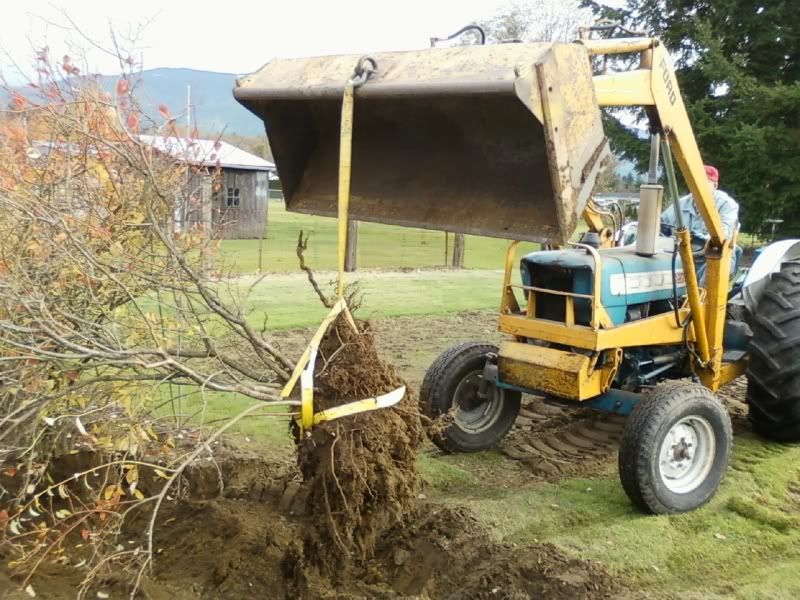 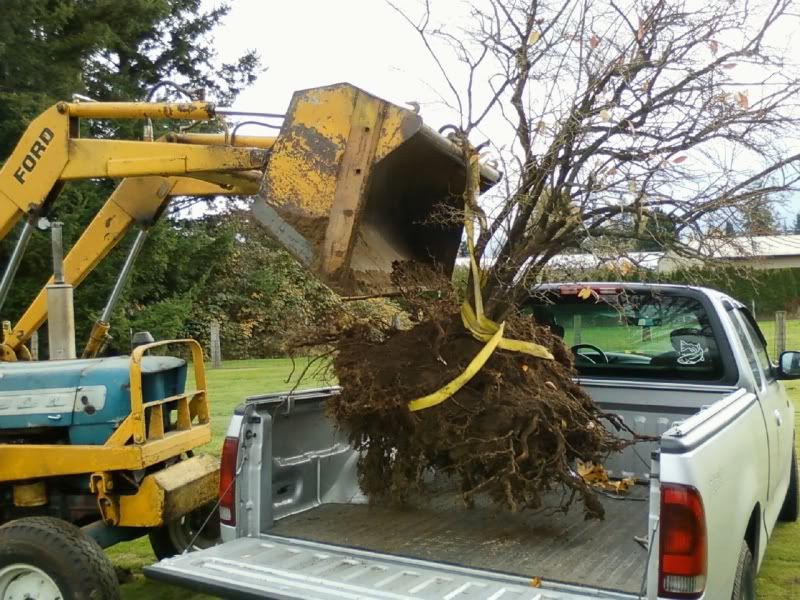 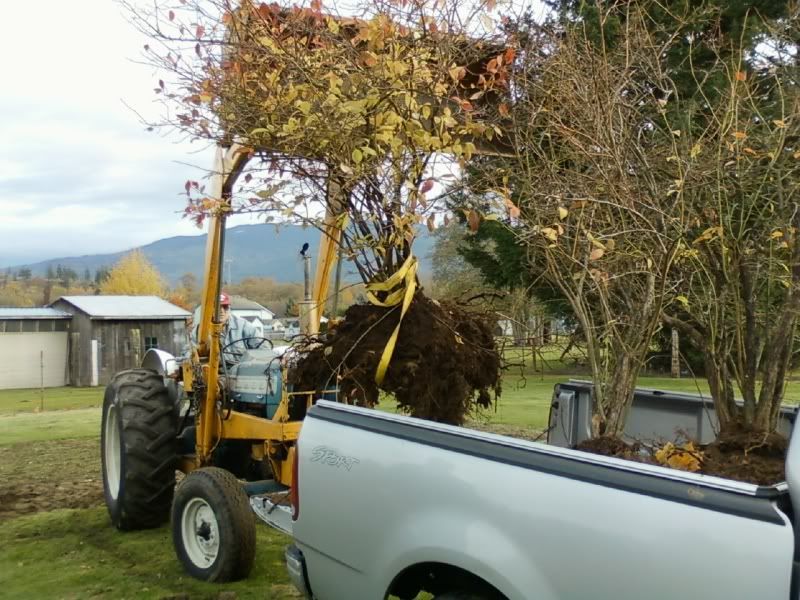 A load of wood is easier on my pickup. 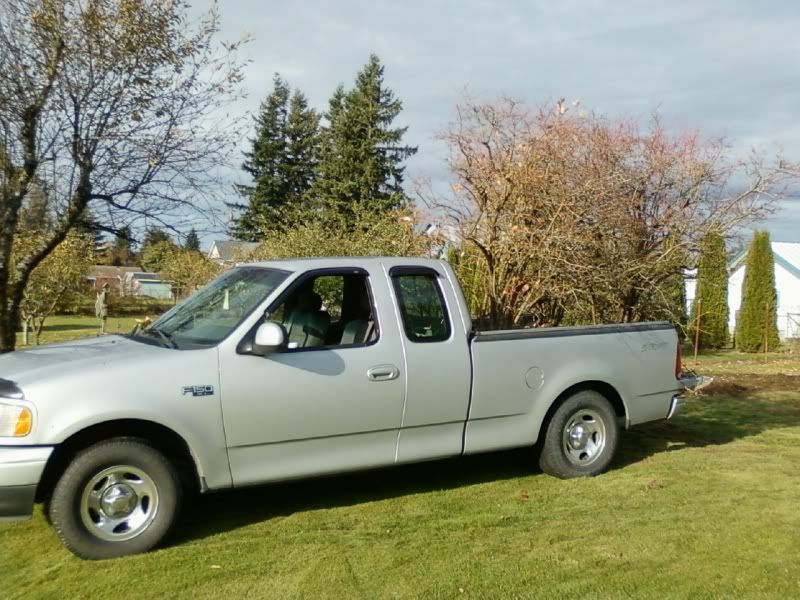 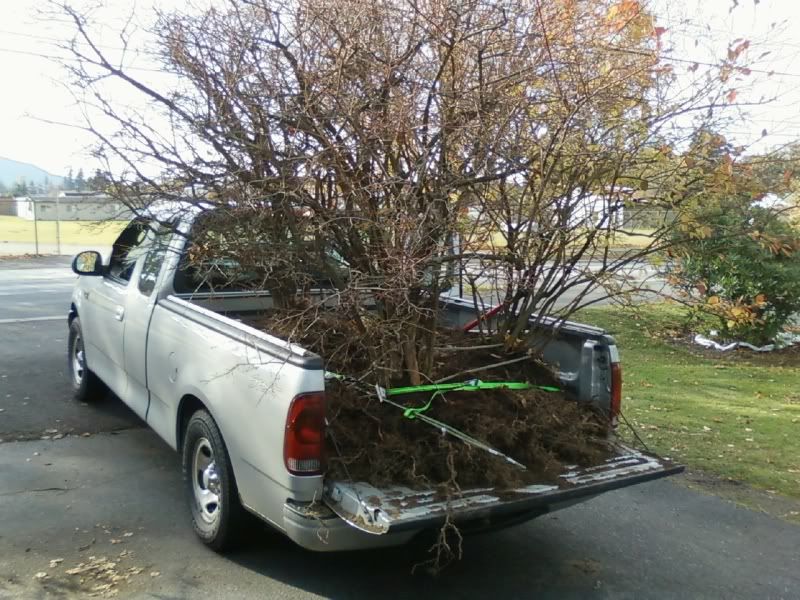 It took three of us to muscle them out of the truck, onto a cart, and into the ground.
My sister has three of the plants, being guarded by german shepherds. 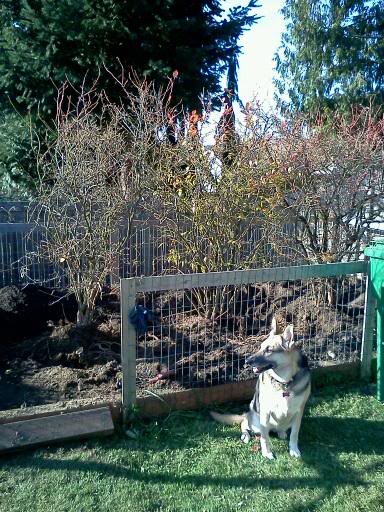 I have two planted by my garden with a few other blueberry plants that were already there when I bought the place. 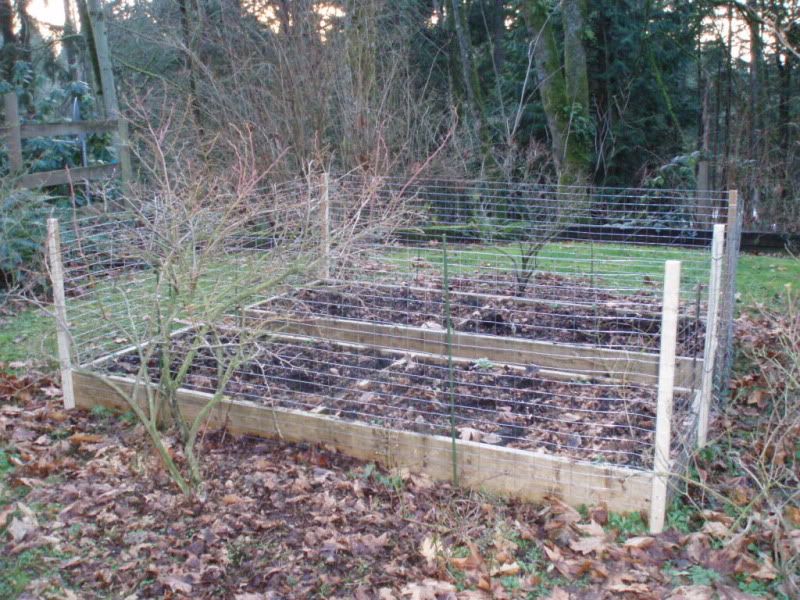 My parents took two plants. They got the biggest one and the smallest one.

I was a little worried about mine this winter. 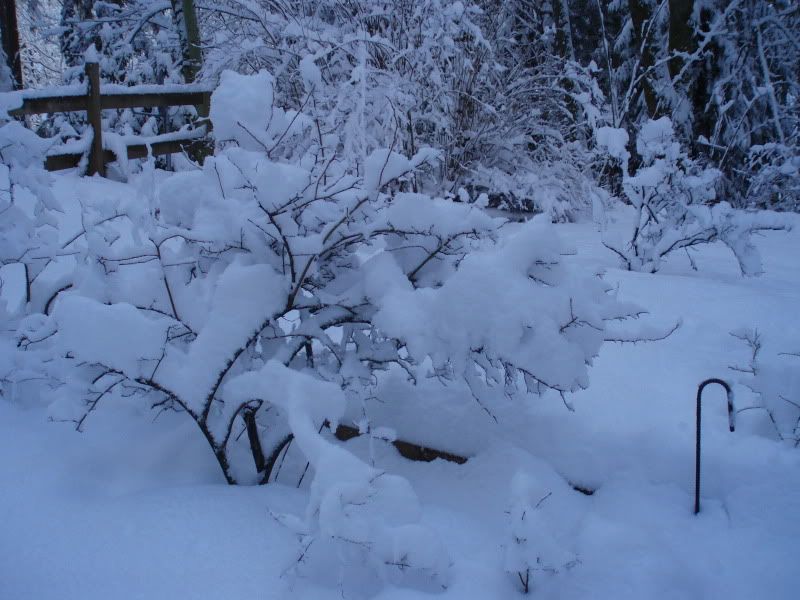 But now they're showing signs of growth. I hope that's a good thing. 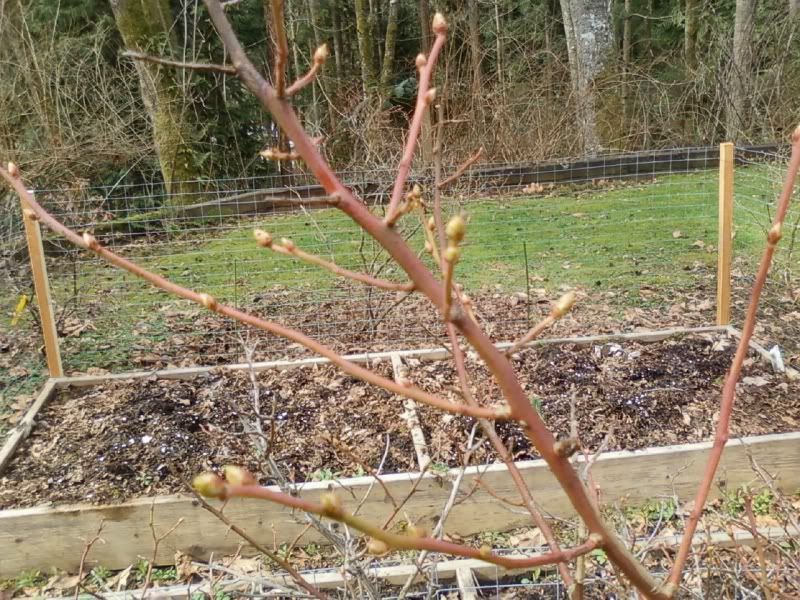 As long as a couple make it we can take cuttings to continue the strain. I've got a couple of small cuttings that I started last year from her plants but I don't know if they survived the winter.
Toggle signature
Lopi Republic 1250 insert
Stihl MS290
Fiskars super splitting axe
2 Toyotas

Nice. My grandparents lived in the Grafton Mts. in Eastern NY & they had blueberry bushes EVERYWHERE.
When the family came out for Sunday dinners, she'd send all her grandchildren - my cousins & me - out
with plastic buckets to pick as many as we could carry. What we brought back was probably HALF of what
we'd picked, but she didn't care. She'd end up with enough for her recipes. She would rinse a BUNCH of
them & give us bowls filled with milk, blueberries & sugar...Thinking back, I don't think I've
EVER had Blueberries since those days (late 50s) that were that plump or tasted that good. I wish I'd had
the sense to pull up a couple of the bushes & transplant them, but I was young & mobile & they probably
would be growing nicely in someone else's yard...
Toggle signature
Bob

Those bushes are beautiful, how old are they? It looks like this is going to be the first winter ours make it without being ravaged by the tick bags.
Toggle signature
Blaze King King
Husky 371XP, Jonsered 2095/2152, Shindaiwa 416
5x8 dump, Homemade splitter converted to electric

"If you get to the point of having 2-3 years wood supply on hand at all times you will take care of 99% of a wood burnerâ€™s problems and you will keep warmer while burning less wood. " - Dennis

The plants started as cuttings from a berry farm near the small town where my grandparents lived. The plants went in the ground at their new house when they retired and moved in 1979.
I've been told that she had a few varieties and that was the reason some plants produced larger berries. We took the plants from the south end of her row because they produced the biggest.
Toggle signature
Lopi Republic 1250 insert
Stihl MS290
Fiskars super splitting axe
2 Toyotas
J

I've got 10 or 11 bushes that I planted 25 years ago.They produce bumper crops every year.I'm curious about how these transplanted bushes do.Keep us updated,if you would,please.

Okay since no ocsil fan answers what about valve repair?

Welcome to the Jungle