Been really enjoying this new wood stove insert, and really appreciate the wealth of information contained in this forum.

Like many others who have purchased this stove (search these forums for Regency i2400 Howl or i2400 Draft Noise to see what I mean) I too have noticed an annoying hooowwwwwl coming from the stove when it's going really good and I push the air control rod in to close the draft.

I understand that it is coming from an "EPA hole" on the right side of the unit, accessed after removing the blower assembly. I have also read that while most people simply put a magnet or otherwise block the hole, that this is not the best thing to do as it may void the warranty and cause the stove to not be as efficient. One person said that by putting metal foil tape over the hole and then poking through the tape with a pencil or something that would disrupt the airflow through the hole enough to make the howling noise stop yet not void the warranty because the hole is still functioning as designed. Someone else reported good results by deburring the inside of the hole with a special file.

I went to the hardware store but could not find one of those files, and my small rat tail file did not reach all the way around the hole, although I did try. I was going to try the tape method, but wasn't sure how long tape would last given the temps these stoves create.

Then I found a set of neodymium ring magnets - these are small round disk magnets with a hole in the middle, about the same size as the EPA hole on the stove. They came in a pack of 3 for less than $4. As an experiment I went ahead and put a couple magnets over the hole, not blocking the airflow but hoping to disrupt the air enough to make the harmonic noise go away. (I wasn't sure if 1 magnet would be enough, and thought that 3 might be overkill, so I went with 2.)

The result? Well tonight we loaded the stove up and messed with the air control rod in various positions, and did not hear the sound at all. I really don't know if this fixed the issue or not, as it did not happen all the time. But I did try to recreate the conditions in which it would happen and did not hear anything. If someone else wants to try this I'd be interested to see if it works for them!

I removed one of the magnets, and the howl is still gone. So for anyone who wants to try this, just using one ring magnet may be all that is needed to fix the howl while not blocking the airflow through that hole. 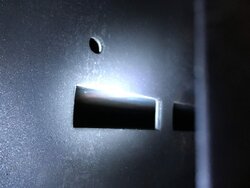 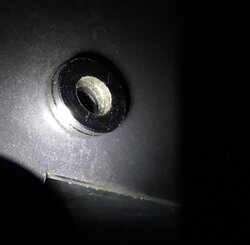 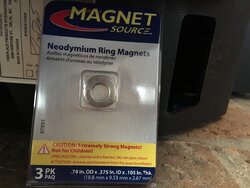 When I first started burning with my Regency H2100, I was experiencing the same issue. It is a "whistling" noise from that inlet. Figured that all I needed to do is to modify the hole a bit, non-destructively. I used either a piece of wood or a paper clip mounted on the hole to disrupt the flow a air a bit to eliminate the whistling from the air intake.

You might want to put a very small piece of metal between the magnet wood stove body to help air flow "disruption". Or, find a piece of wood shaving that could be wedged in the hole, without falling into the body...
Expand Signature
Regency H2100 Hearth Heater - *being* liberated from the tyranny of the utility company!

Reducing my inclination to scrounge for kindling/tinder - Making my own kindling + a chunk of SuperCedar and away we go...
Reactions: joneo
B

Please don't use wood or paper there. It just isn't a good idea.
Expand Signature
Regency 3100 in basement
cawley lemay 600 sold
member of pa guild of professional sweeps
Reactions: joneo
You must log in or register to reply here.