A bit of background.. I have been burning for many years, and over the last 6 or so years have been using a 1st gen Jotul 8 from 1984. I really loved the Jotul.. It heated up very quickly, would eat anything you threw in it, and when packed and damped down would get good overnight burns. I was also impressed with it's relatively clean burning - although double wall all the way down to the stove may have played a part in this as well.

That being said, I'm sure like many of us, at the start of each heating season I've started to look at new stoves. While I loved the Jotul, I couldn't help but think I was probably going through more wood than necessary. If I had the air open more than 1/4 then I'd be reloading more than a few times a day. I also wasn't crazy about the arched opening as it restricted the split size that I could squeeze into the firebox. What sealed the deal this year for me was the tax credit... Too good to turn down I figured.

I live in an 1800's farmhouse in Pennsylvania, approximately 1800sq ft. The stove is located in the living room and the house has a central staircase so the heat from the stove shoots right upstairs. I like to sleep cool so it works out perfectly.. I don't think the heat has been turned on upstairs in years.

I looked at a few different stoves.. Originally had my sights set on a Woostock Progress Hybrid but I'm impatient and their production schedule is a little far out. I went to a local stove shop that has been in business since the 70's. They sell many different models and after speaking with them and describing my burning habits, they initially recommended a Joul Oslo v3. They did mention the new high flow catalyst and how there wasn't a great deal of real world data on operation as of yet. While I was at the shop I happened to notice a Hearthstone Heritage and it really caught my eye.. I loved the look of the stove. I also saw the Green Mountain models and while I liked those as well, there was something about the soapstone that I really liked. We went over the pro's and con's and after mulling it over for a while, I decided to pull the trigger on the Hearthstone Heritage. Having not had burned with a catalytic stove before, I liked the idea of it being a hybrid design - with burn tubes and a catalyst.

The stove was installed about two months ago. I was going to install myself but in the end and since the tax credit covers install as well I figured - why not save my back and myself some aggravation, so I let the dealer install the stove. I'm probably still in the honeymoon phase with the stove but I will say that I've been pleasantly surprised with it's operation and I'm absolutely loving the catalytic burn. I would have typically only burned the Jotul when temperatures got very cold - If I used the Joul in marginal weather (40's) then I would surely get baked out of the living room. With the Heritage I'm able to get the stove going, engage the catalyst, and then settle in for a nice low burn. The stovetop hangs out around 300F and the catalyst probe is squarely in the active range. I typically load up around 11pm and when I tend to the stove around 8:30a it is about 250F with plenty of hot coals, ready for a reload. So far, so good!

When I purchased the stove I wasn't convinced that I'd be really using the side loading door.. I can say now that I'm a convert. It's great to be able to get nice long splits in the stove via the side. It's also great to not be spilling ashes out of the front door. The Heritage has a flip down side door which also makes for a clean reload.. any firewood dirt is dumped back into the firebox when you close the door.

My biggest complaint so far is probably a plus and a minus. The plus is that the stove seems to have a really nice airwash for the front window. My glass has been staying relatively clean. The minus is that when I do go to empty ash, I think the airwash causes some turbulence and I've noticed quite a bit of ash being kicked up.

Outdoor temperatures here in PA haven't been too cold as of yet (20's and 30's at night - 40's during the day as of late) so we'll have to see how the stove keeps up when it starts to get really cold. I'll report back!

I'm going to take a peek at the chimney in a few weeks to see how it's looking as well. I'm curious to see if it will stay as clean as it did when I had the Jotul.

In the meantime, if anyone has any questions, please let me know, I'd be happy to help if possible. 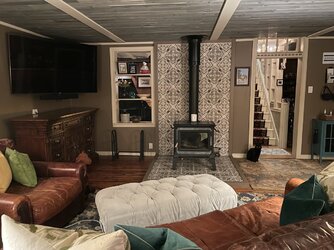 Your experience with the stove echoes mine - I had my Heritage 8024 installed last March and have really enjoyed it. I agree I didnt think I would use the side door much, but now that is mostly the one way I load the stove. I only open the front to shovel out ashes for the most part. I like that the air port in the front is below a ledge, so I can load the wood all the way to the glass on the edge above the air port for overnight burns through the side door. The stove runs very well, the secondary air combined with the catalyst seems to be an extremely efficient combination.

I also find that the claim of soapstone taking "forever" to heat up is grossly exaggerated. If I am starting from a cold stove, I load two small kindling pieces, a super cedar, three normal splits and leave the air on max open. After roughly 30-45 minutes I am up to temp and the catalyst is ready to be engaged.

Judging by the thermostat on the top left of my stove, I typically run 350-500 depending on where I want the temp to be at. I find its very easy to control with the bottom lever.

Honestly my biggest problem has been keeping my house from getting too warm, as even in the 20's and 30's I am getting the main living areas up to 76-78F easily! My house was built in 2019 so is well insulated so that plays a big part.

Really enjoy the stove - thought I would chime in as well for anyone reading in the future. 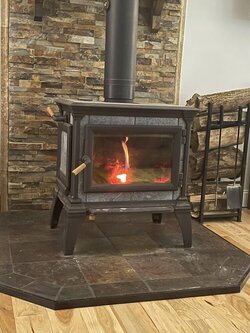 Really love our new Heritage. I grew up in a home with wood heat but it wasn't until I turned 49 that I'd had enough of the propane bill to have a stove of my own. Had it installed in early October and fired it up a few weeks ago. Wife and I (and family) are really enjoying the warmth and character the woodstove brings to our 2900sq-ft home.

I do have a question though that someone might help with. I'm not satisfied that I'm getting the best long burn times the stove is capable of producing. On the lowest setting, with catalyst engaged and burning a full load (full firebox of 4-5 splits of ash with moisture between 12-15%) we're getting about 7-8 hours. I have enough coals remaining to refire, but I was expecting a longer burn time. Am I wrong?

When burning low with catalyst, the stove keeps our whole home warm so far, but the temps haven't been extreme (yet). I'm worried that in the coldest part of the year coming up, I'll need to open the airflow to allow for more heat to be produced and my burn time will plummet to something even lower than the 7-8. I was really hoping that I could load her up before bed and not have to worry about it until morning. Is this an unreal expectation that I have?

Experimenting a but by burning on anything other than low right now, I found out the stove can cook us out of the family room where located...so she works when she needs to. 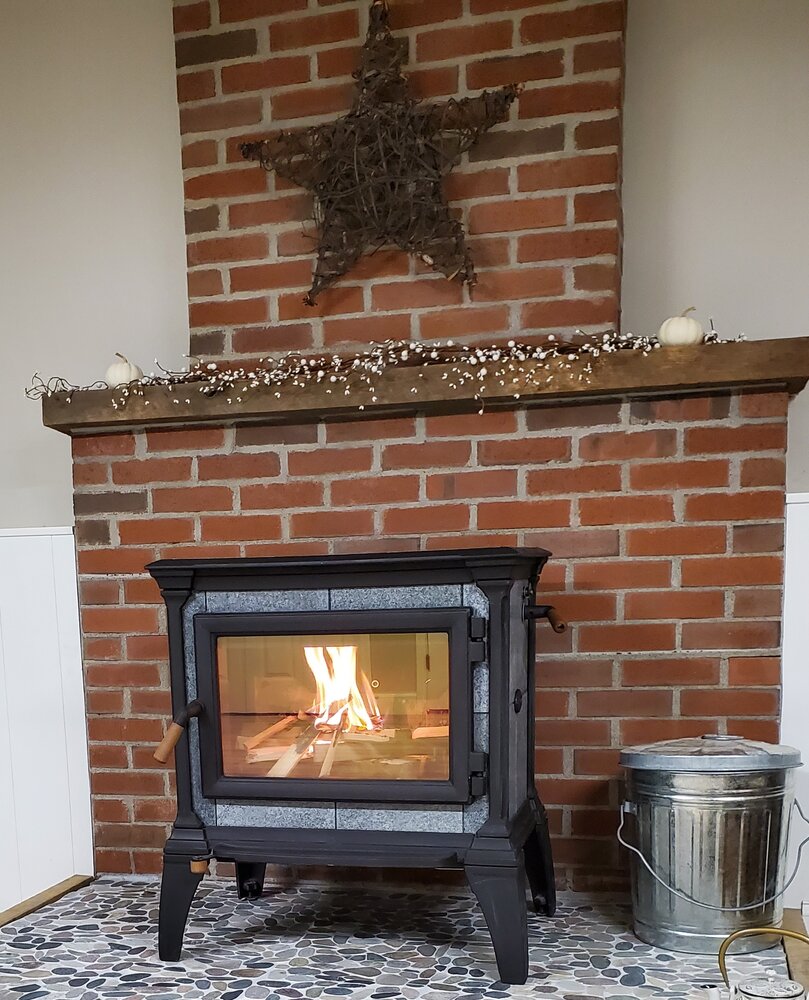 Hmm.. Maybe try 3 larger splits vs the 4-5 smaller ones? Once I've got a good coal bed I find that big splits for overnight with not a lot of air space makes for a longer burn vs the firebox crammed with smaller splits.

I've also wondered about burn times when it starts to get really cold too, but at the moment I'm not having any issues. I load up the firebox with three large splits on a hot bed of coals, let it take off and then engage the catalyst and turn down the air. I loaded it up on Wednesday night at 11pm with 2 large splits and an unspilt round and Thursday at noon I had large chunks of red coals that I could have used to start another fire with a stovetop temp of around 200F. I've actually been really impressed with the long burn times and the heat retention of the stone. Might just take some experimenting.
Toggle signature
Jotul 8 (1984)
Hearthstone Heritage 8024
You must log in or register to reply here.

Hearthstone Heritage to Lopi Liberty - worth it?