I have just been keeping the kindling barrel full and the wood pile in the garage full. I have been working some long days the past few weeks.
Expand Signature
Kuma sequoia stove, PE summit insert
Stihl ms880 and ms 660
Wilton bash 20 lb sledge and 8 lb maul
2 chocolate labs
Mahindra 2540
Jotul Oslo at 1st house
Reactions: Gearhead660, Riff, JimBear and 2 others

Haven’t been able to do much lately, last storms I’m guessing snowed me out although temps back to 50-60 for a few days this week at least, maybe it’s worth trying one more trip. First kiddo on the way spending most time trying to put things together/set up a room.
Reactions: heavy hammer, thewoodlands, Gearhead660 and 3 others

I'm still doing my dead pine cleanup of this area, in picture 1156 you can see the base was rotten and in picture1158 is the dead pine I felled/split, four loads went over to the outside fireplace

The last rounds I split were from the downed pine in picture 1155, another two plus loads were split and brought over to the outside fireplace.

This morning when I went to start the Rhino it didn't want to start (it was only 17.2, not that cold) so the first thing I did was check the positive and negative connections. Both posts had no buildup but the positive was loose so I tighten that up and put the trickle charger on it for an hour.

I used the RTV the last three hours of the day hauling more dead pine over to the reducer, once the RTV warms up, that heater will make it real toasty inside the cab but I still missed the cold breeze you get out in the open with the Rhino.

The pine branch in picture 1170 came down many years ago not long after I joined hearth.com. I did the top with the pole saw and then bucked up some of what's left. I cleaned up a bunch of the dead branches with everything over to the fireplace waiting for a wet day.

In picture 1182 you can see where it came off the pine tree.

thewoodlands said:
The pine branch in picture 1170 came down many years ago not long after I joined hearth.com. I did the top with the pole saw and then bucked up some of what's left. I cleaned up a bunch of the dead branches with everything over to the fireplace waiting for a wet day.

In picture 1182 you can see where it came off the pine tree.
Click to expand...

Gearhead660 said:
Seems like you are out playing in the woods everyday. Kinda jealous.
Click to expand...

After a couple cups of coffee and a shower in the morning, the wife kicks me out of the house. I had planned on cutting more hardwood but each day I spend cleaning up the lot, the more I like how it looks.

I'm pretty much working in the woods almost everyday but I still have five piles of pine logs that need c/s & burning from the clearing I did for the new garage in 2018. I had planned on two of those piles being gone by this winter but we had a very dry summer and fall so I couldn't burn them.
Expand Signature
Get
It
Before
It
Rots

Today started with me splitting some junk pine for the outdoor fireplace, hopefully we get some snow and rain so we can have a fire. I then felled the last part of what I think is a Red Maple, the other two trunks were all punky so I felled this with a pole saw and then split it.

I grabbed some of the slabs from some oak I had milled, the stack in the pic is the rest of the slab and off cuts

I have only filled the garage here and there after work a couple of times. The winds have been pretty bad lately and we have been working storm for the last few weeks. I'm hoping things return to normal this coming week.
Expand Signature
Kuma sequoia stove, PE summit insert
Stihl ms880 and ms 660
Wilton bash 20 lb sledge and 8 lb maul
2 chocolate labs
Mahindra 2540
Jotul Oslo at 1st house
Reactions: kennyp2339 and MMH

Started working on removing all the Buckthorn. Cleaning up all dead branches and enjoying a fire burning all said branches. Sunset comes too soon this time of year.... 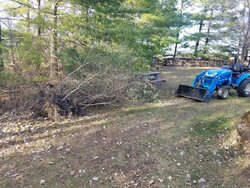 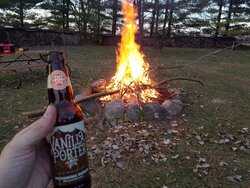 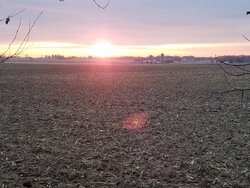 We had a heavy rain overnight so I burned a bunch of the dead pine from the cleanup, apparently I only took some pictures of the start and the end. This burn we'll give me more room near the fireplace for more junk pine to burn on the next wet day.

I took down a cherry branch that will make that area safer when I go through with the tractor in the winter, it also was rotting from the top down. I then limbed up some old pines on the northside and cut up a bunch of downed smaller dead pines and hauled six loads over to the outdoor fireplace. The limbing up I did today along with picking up some smaller dead pines will allow me to push snow into this area, hopefully I won't need it.

I have a pine leaning into the neighbors property. I think Thursday morning I'll pull it over with the hoist and cut it up. If I do I'll get some pics.
Expand Signature
Kuma sequoia stove, PE summit insert
Stihl ms880 and ms 660
Wilton bash 20 lb sledge and 8 lb maul
2 chocolate labs
Mahindra 2540
Jotul Oslo at 1st house
Reactions: MMH, Gearhead660, thewoodlands and 1 other person

Some of the day was spent clearing trails before some possible snow coming in next week. Some of the trail clearing was cutting off some face slappers with some older loppers, there were plenty of wrist size branches that were across the trail that I threw into the woods.

I did have a pine come from the neighbors property into our trail so I cleared that and did have one American Hophornbeam that was down but there was a small section of it that was rotten so that was left in the woods.

The battery on the Rhino had a bad cell so I picked up a gel battery the day before Thanksgiving, so far things are fine.

One of the areas of the US that is growing the fastest is - Boise/Twin Falls, Idaho. So there is construction. Near me, there is about a 10 acre site that has been laid out for houses. They've put in the underground electrical and plumbing, and have paved some roadways. There were a few trees that heavy equipment pulled and piled up, mostly ponderosa pine and some ash .

There was a big, thick, and gnarly ash tree inside the pile. Of course I wanted it but was intimidated by how to get to it, and how was I going to cut it - it was at least 30" at base (but not tall). So, I worked on smaller wood around the pile. Was I even going to do something with this ash tree? Of course I was. I hooked a strap to it and pulled with truck until the tree with big root ball rolled out of pile. I just chipped away on it - cutting and noodling.

There were a few big rounds - no way was I even going to be able to roll these into the trailer. I tried to bust up the biggest one with a sledge and wedge - the wedge just bounced out each time I hit it . So I noodled it into 3 pieces. There is still about 2 big pieces waiting to be worked on, but I got another good load of ash (and a little pine and russian olive, too). 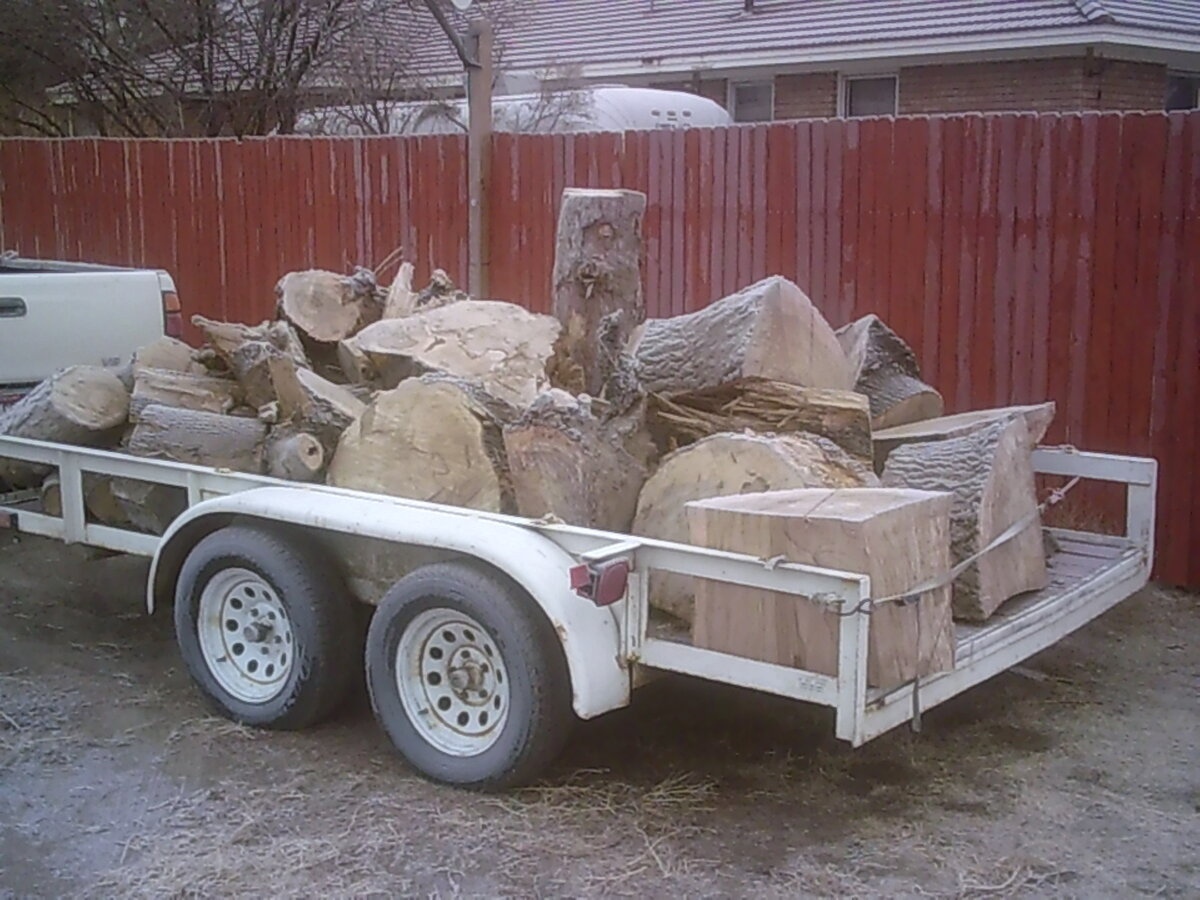 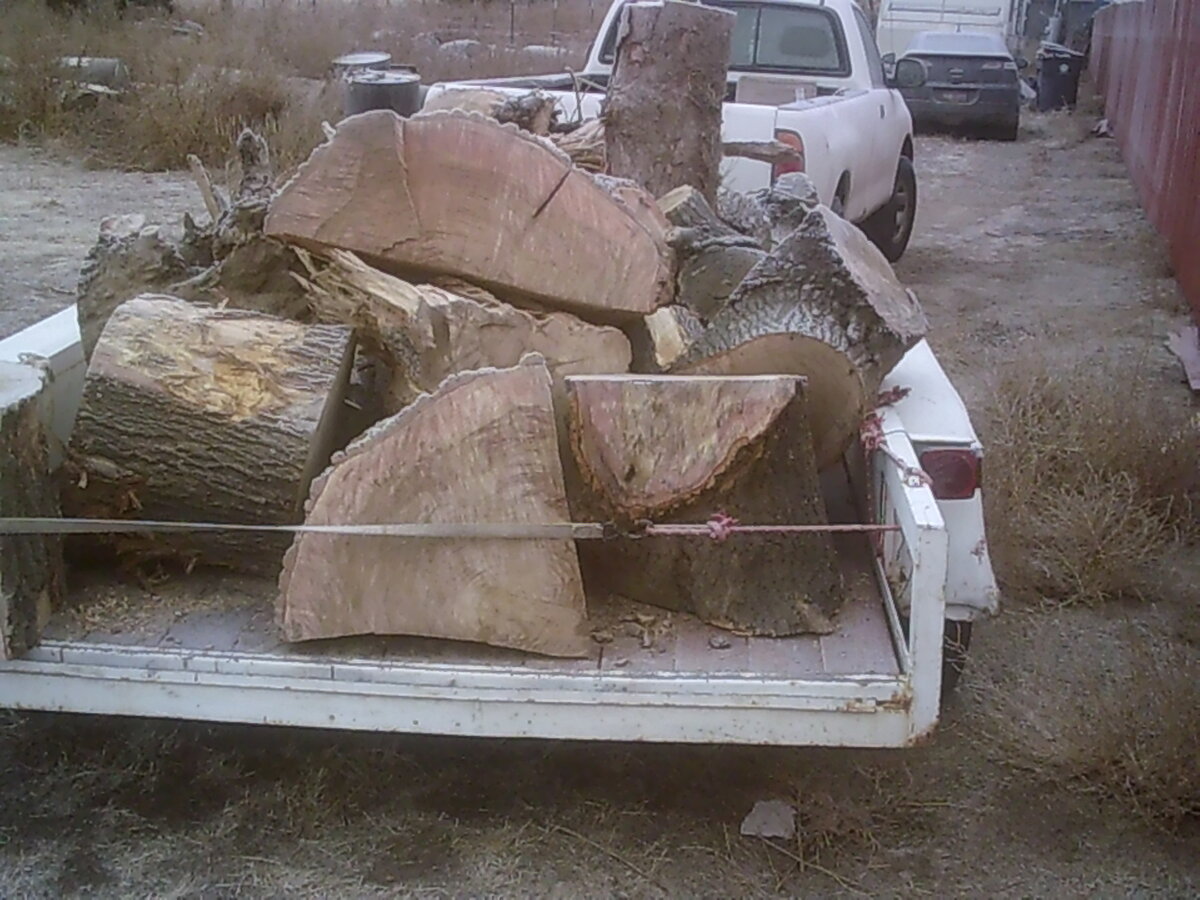 EODMSgt said:
Dropped a standing dead ash yesterday afternoon. Cut it in sections, drug them down the hill, cut into rounds, loaded up and brought home. A little punk at the very top but otherwise a good score. Almost at the point where I'll have to switch from the ATV to the snowmobile to get to this area.

That first pic looks like a scene from a bad slasher movie.
Reactions: EODMSgt and thewoodlands

The first of ten roosters we are culling. We wanted to do this about a week ago, but the weather has not been nice enough. Killing this rooster was one of the most uncomfortable and unpleasant experiences I've ever had. He is in the oven now, I'll post in the cooking thread after we taste him. The carcass, organs, and neck will be cooked down into stock and the remaining solids will be made into dog food.

Felt good to get out and do some cutting yesterday. Probably cut and split about a full cord.

heavy hammer said:
I have only filled the garage here and there after work a couple of times. The winds have been pretty bad lately and we have been working storm for the last few weeks. I'm hoping things return to normal this coming week.
Click to expand...

This was a blow down from spring 2019. I just cut the top out of it a few days after the storm and left the few limbs holding it off the ground since. I went out yesterday evening and cut it up. I was planning on splitting it today but it'll have to wait since it's raining. It's a post oak....base was roughly 20". I contemplated saving the bottom 9' to be milled for a table I want to make but I have no good way to haul it to the amish neighbor so I just bucked it up.

I had a small Maple wind damaged tree across the trail that I took care of and then felled what was left standing and bucked up which pretty much filled the tub.

I checked another area that has a big ole Maple and it lost part of a limb, hopefully mother nature allows me to take care of it before we get a enough snow that will block off access to certain parts of our property. The buds in picture 1250 are from the big ole Maple.

We are still fixing things from a few storm ago so hope fully this week won't get to bad but we shall see. we have been working seven days a week about all of November, and most days are 12 plus a few weeks were 16 or more.
Expand Signature
Kuma sequoia stove, PE summit insert
Stihl ms880 and ms 660
Wilton bash 20 lb sledge and 8 lb maul
2 chocolate labs
Mahindra 2540
Jotul Oslo at 1st house
Reactions: JimBear, MMH and thewoodlands 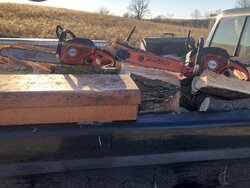 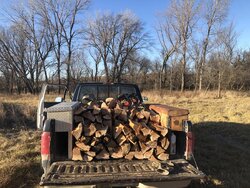 JimBear said:
Gave the 5105’s some work today & worked up a load of Honey Locust

Nice work @JimBear , it also looks like you had a great day for it.
Expand Signature
Get
It
Before
It
Rots

Reactions: heavy hammer and JimBear
You must log in or register to reply here.