Yes, that’s the reference. About ten years ago, my husband got me the books from the library when I had an extended time of being sick in bed, and I really enjoyed them. When we were moving to Texas we listened to the first book or two on CD for the long car trip for the kids. Most of my reading for the past decade and a half has been children’s literature, trying to preview or at least share everything my kids read. I can now no longer keep up, though I do still tend to read what the younger ones are reading because they like to talk about it with me.
Toggle signature
Current home: Enviro Kodiak 1700 Insert

MrCool1 said:
I skipped the slow cooker yesterday - threw 3 (HUGE) chicken breast halves in, covered with swiss cheese, a can of cream of chicken soup mixed with a quarter cup of milk, and the some stuffing mix on "my" side. then drizzle a 1/4 cup of melted butter over - if you don't do the stuffing, probably want to skip that butter part!
350 degrees for an hour.
J had to work late so I tried to time it for when she was supposed to get home. missed by 20 minutes. I got this off the internet years ago, apparently it can be made up ahead of time and frozen - sometimes I make a couple and freeze one to cook later. seems to turn out just as well.
J hates stuffing, so I figure its best if I try to accommodate! and the stuffing sneaks over while cooking - so I still hear about it!

I think removable crocks in slow cookers were a great upgrade not only for washing but also for the chance to stick the whole crock in the oven on occasion. I do that, too, when I realize that I’m not going to manage to have my meal cooked in the time I have, though I try to avoid using the oven too much in the summers down here.
Toggle signature
Current home: Enviro Kodiak 1700 Insert

DuaeGuttae said:
I think removable crocks in slow cookers were a great upgrade not only for washing but also for the chance to stick the whole crock in the oven on occasion. I do that, too, when I realize that I’m not going to manage to have my meal cooked in the time I have, though I try to avoid using the oven too much in the summers down here.
Click to expand...

we don't have A/C - so we watch what we do with the oven in July and August - our 100 degree days this year were in late June early July - when I was re-roofing the house! ( hated that!)
another reason I like the slow cooker - we have a covered back porch - and the slow cooker works just fine out there instead of any extra heat in the house. our trees have gotten big enough we have a few acres we call the "dark woods" - fir trees sneaking past 40', and no sun ever hits the ground in there. 10 degrees cooler in there in the summer - so we have picnic dinners in there a lot in the hot weather.
now that I might have time, next year we want to do a summer kitchen - with a wood fired oven - grill and smoker - with a metal roof - and hopefully chimney out the smoke from it all. toughest part of that is our woods are under forestry rules - so when the burning ban starts, we can't barbecue unless propane - so we don't bother. and usually we quit before then - these fir and pine needles really want to go.....
Toggle signature
Napolean model 1100 pedestal with built-in ash pan installed 2000 in new MH
2007 Speeco 22 ton splitter
Husky 357 with 30" bar
A couple husky's with 14" bar
Ryobi 14" bar "battery" - amazing little guy
2003 Dodge Ram Diesel Dually 3500 wood hauler
2005 Iron Eagle 18' Flatbed auxiliary wood hauler
50', 100', and 200' 3/8 cable, 6 snatch blocks, warn 12K winch
Reactions: clancey and ispinwool

Yes, we don't do much oven cooking in the summer and none on the very hot days. The stove top and the grill get used a lot more. We use the dutch oven much more in the winter, mostly for slow cooking on the wood stove.
Toggle signature
PE Alderlea T6, Jotul F602
The most important tool in the wood burning process and the largest variable is the one that is running the stove.

My husband helped me make a large batch of orange chicken last night. We kept the sauce separate so that people could apply it as desired. All six of us enjoyed the chicken for dinner, and we had plenty to keep some for leftovers and still put some of the breaded chicken in the freezer for use at a later date. It was a lot of work to bread and fry a large bowl of chicken, but the rave reviews and the future meals are good rewards. 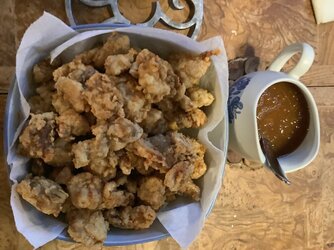 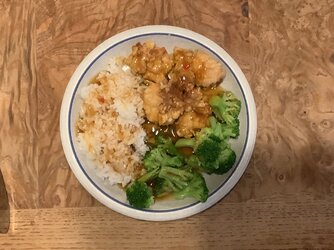 Yum! Found a great sesame chicken recipe online. I will post the link tomorrow when I'm on my laptop.

I have a great story about buying my wok in 1988. I will post that, too.
Toggle signature
Lopi Answer insert
Stihl MS 180C Mini Boss
6- and 8-lb. mauls

PaulOinMA said:
I love orange chicken. Recipe please. Would always get it at Ollie's Noodle Shop in NY near Broadway.
Click to expand...

Here’s the base I used. I subsittuted fresh garlic, ginger, and hot pepper, and didn’t add zest or green onions simply because I didn’t have them. I’m sure they would add, though the meal was delicious anyway. 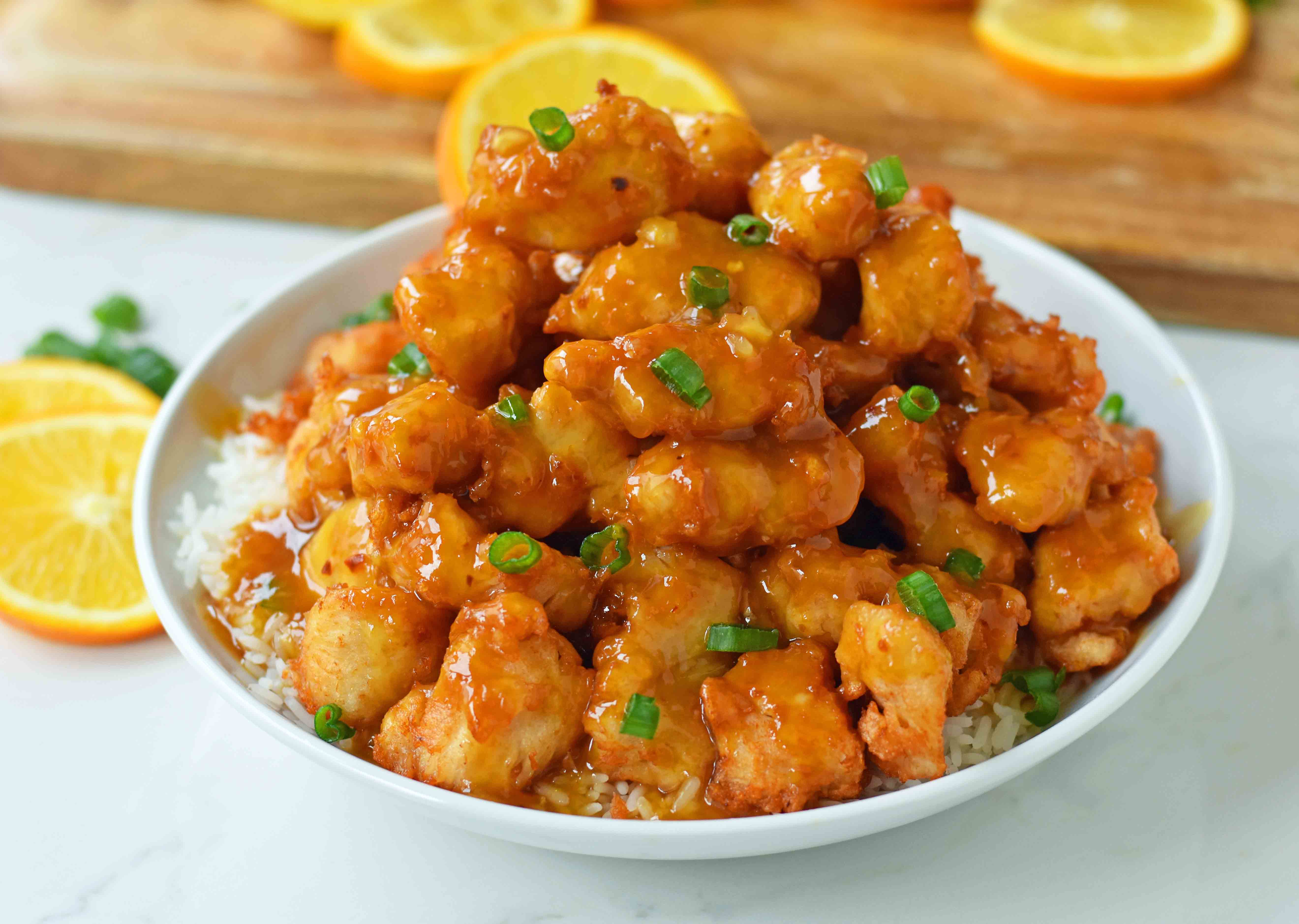 Chinese Orange Chicken made at home is way better than take-out. Crispy fried chicken with a sweet and tangy orange sauce. The perfect orange chicken recipe

This is the recipe you've been looking for! It makes a perfect sesame chicken. This excellent recipe comes out perfect every time with little fuss and inexpensive ingredients you probably have on hand. This recipe is truly restaurant quality... try it, you won't be disappointed! (Recipe... 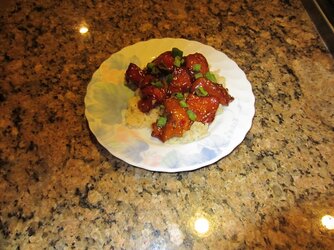 Bought my wok in early 1988. It was my first job out of grad school. A colleague was a Chinese woman.

Showed her the recipe I followed for peanut sauce. She laughed, "too many ingredients."

She knew how much I liked to make Chinese food. I was leaving that job for another division within the company. Went in her office right before I was leaving and told her I bought a wok over the weekend.

Thought she would be pleased. Instead, I had this little Chinese lady screaming at me.

That's a nice memory of days gone by and I love cooking with my stainless steel wok and so easy too..Those folks have the right idea about cooking...You can put anything with it to make a real nice meal just like a "stock pot" from years ago...thanks...clancey

Just wanted to pass on a place, if anyone is looking for a wok.

The Wok Shop: Selling woks and Asian kitchenware for over 48 years

Mine was bought at the outlets in Flemington, NJ. Was living there at the time.
Toggle signature
Lopi Answer insert
Stihl MS 180C Mini Boss
6- and 8-lb. mauls 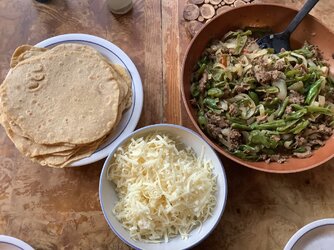 Yesterday I made another large batch of tortillas. My nine year old is an awesome helper. She fries each one for me so that I can roll out the next one. I picked 90 shishito peppers off our plants and sliced and seeded them for the fajita filling. Otherwise it was just some shaved steak and sliced onions, but it was yummy.
Toggle signature
Current home: Enviro Kodiak 1700 Insert

My husband has been wanting Chicken Paprikas(h) recently, so he cooked up a pot tonight. We didn’t have any egg noodles, so we made some in the afternoon. Both made for a tasty supper. 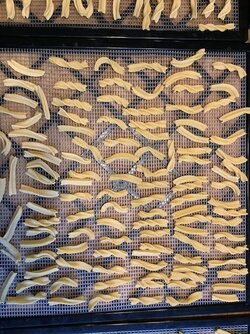 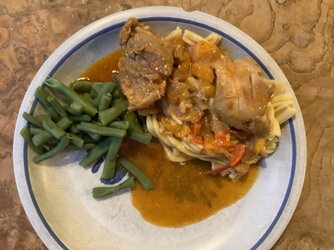 I made some really decadent crackers today following this recipe: 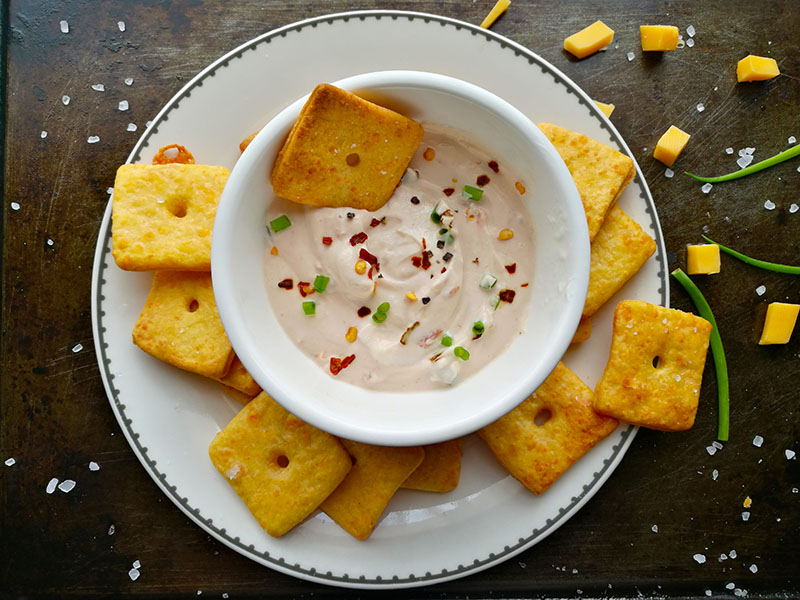 Skip the store bought crackers and give my homemade spicy cheese crackers a try. Made with just 5 basic ingredients,it is easy to make and so delicious.

I used part cheddar and part Pecorino Romano as well as a small amount of my homemade fish pepper powder (pretty hot stuff). The crackers were really rich, perhaps too strong with the pecorino, but they were a hit with my kids. I think I’ll try some variations in the future, perhaps one with soft goat cheese. 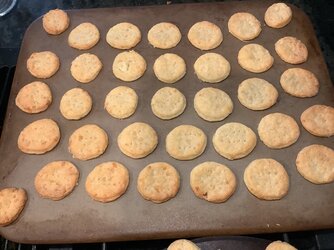 They look really good but I would leave out the fish chili powder and substitute with something else more mild...I like your combination of cheeses..mmm good...clancey
Reactions: thewoodlands

Tofu, broccoli, green bean and edamame stir fry. If you like stir fry and need to make a lot and don’t have a big burner you REALLY need one! 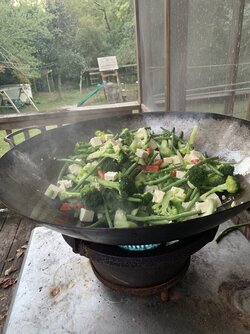 fbelec said:
that looks great. but don't know what edamame is
Click to expand...

Thanks. During the summer it’s a once a week meal to cook outside. Green soybeans. Often served in the shell as an appetizer at Japanese restaurants. Kids love it. Fun to pop out of the shell. It’s almost like a vegetable. It’s green right? I’ve been buying frozen shelled. Even added to a meatloaf for something different as I didn’t have time to prep carrots.
Toggle signature
Jøtul F400
Drolet 1800i
Coastal N.C.
Ryobi 3716
G660 with 28”, 36” and 52” bars
couple Fiskars, Kelly Works
Buckin’ Special 36” double bit

I haven't added anything but hope I do in the near future. After my operation in early March I let my weight jump to 234.4 (all my fault) in late August I started my weight loss and this morning I was 210.4.

Today is my last day on my weight loss adventure and tomorrow we'll have some scalloped potatoes for supper. I'm hoping that I can maintain my weight between 212 - 216.
Toggle signature
Get
It
Before
It
Rots

EbS-P said:
Tofu, broccoli, green bean and edamame stir fry. If you like stir fry and need to make a lot and don’t have a big burner you REALLY need one!

Our summer is finally winding down here. As a (perhaps) last hurrah with summer vegetables last night, I made a bhindi (okra) masala. My husband had recently made a lovely batch of Greek yogurt, so I was able to make naan and a cucumber raita (the cucumbers were dehyrdrated, but I let them soak in the yogurt, and it worked acceptably). 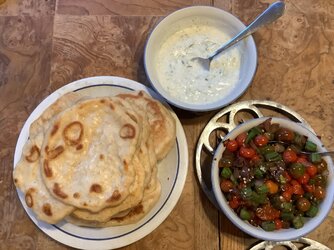 DuaeGuttae said:
That looks really tasty. What is that burner?
Click to expand...

I think this is where I got it it from. It’s a propane wok burner. It’s like a 200k btu burner. Needs a high pressure regulator. I can brown 10# of burger and 2# of onion in 10 minutes! Looks like they don’t have my big daddy burner. Just the measly 160kBTU 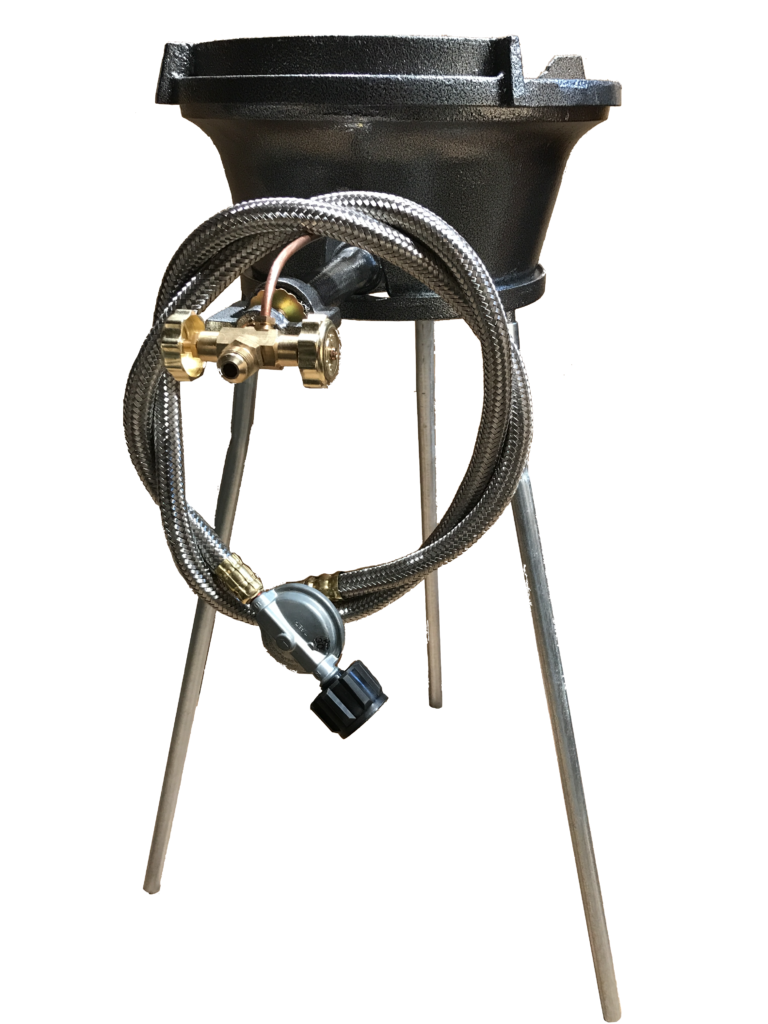 I think I will be eating these "forever"--so many tomatoes I have: Its fried tomatoes and apple sauce with cinnamon and linked sausage with bread a nice lunch to eat..clancey 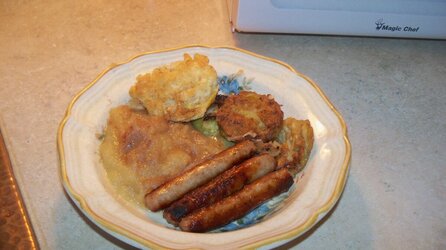 Reactions: thewoodlands
You must log in or register to reply here.