I'm only into my first week of burning this season and it hass become obvious that our wood usage is going way up. COVID has the kids schooling from home and parents telecommuting. Usually we're mostly weekend/holiday burners, but this year seems like it'll be 7-days/week. Usually I'd have close to a three year supply built up, but what a "year supply" is has changed on me.

Fortunately I'm in a relatively mild climate and have forced air, so I'm thinking of sticking with ng on the more mild days and wood for the colder days. Any of you out there facing a similar dilemma?

Burning 24-7 regardless, or the pipes will freeze. But hey, that's only for 7 months. The other 5, I get to cut back to burning part time. This year, we had a good stretch between June 16 and August 30 where it didn't even snow! So I took that time off, mostly. Grew some tomatoes - barely. At least we both work from home normally, so we get to enjoy the heat, which is a target of about 58-63 in the house, year round. I don't have or need AC.

Way back when I was a college kid, I had a duplex in Redding CA for a winter, so it had one shared wall. The only thing the NG was used for was space heat. As I recall, the NG bill for the entire winter was $3.60 some odd. Now, the electric for the air conditioning, on the other hand.... And that was probably just to keep it under 80, at night, when we were home.

There's people in Redding who dream of a house that's around 60 degrees!

BTW, you could soak your toilet paper in waste oil and - - nevermind!! - It'd probably get me banned from here and my photo posted at the CA border stations!
Last edited: Nov 12, 2020
Expand Signature
Kuuma VF100 - Great!
Englander 24-ACD - Some issues.
Some kinda fireplace / stove thing. - Pretty, but inefficient.

I burn 24 /7 anyway so I dont think we will be going through more wood. My wife and kids will be home every day. the only way I see my usage going up is if its a cold winter. I just sold 2 cords to a friend who just started burning. Im still.sitting on 9+ cords so I'm not to worried. I have about 6 cords in log lent I still need to cut up , there's 2+cords for me to scrounge across the street ill get over the winter.. It pays to keep your self stocked up.. You never know..
Expand Signature
VC Encore 2040
https://www.hearth.com/talk/threads/solar-kiln-for-hardwoods.170518/
https://www.hearth.com/talk/threads/solar-kiln-for-hardwoods-part-deux.175875
Reactions: mrd1995
B

If I'm home all day, instead of just a fire in the morning before I go to work, a small fire when I get home around 6pm, and an overnight fire at 9 or 9:30, there will be another load fed into the stove at mid-day. Back in the pre-COVID days I was usually at work all day, that feels like 100 years ago at this point. So, one more load per day basically is what I've found if I'm home all day. But it's definitely more. How much more over the course of a winter I'm not sure.
Expand Signature
Englander 30 NC
Jonsered 2166
Stihl Farm Boss MS271
Stihl MS 250
Troybilt 27 ton splitter

No changes for me . . . other than the fact that we've hit a nice stretch of really warm weather. Otherwise, it's business as usual with the normal fires. I continue to go to work, but to be frank it's pretty dead with no one requesting fire or injury prevention classes in school or in the business world. My wife has opted to take a break from her work as a nurse due to the high demands and her personal health so she is at home, but she has taken breaks before as well.
Expand Signature
Jotul Oslo, MTD 27-ton wood splitter
Jonsered 555 chainsaw
2010 Nissan Titan . . . with a trailer
2017 Yamaha Kodiak 700 EPS with Saab Wood Hauling Trailer
Reactions: Highbeam, SpaceBus and D8Chumley

If you live on a wooded lot, Just burn fallen limbs/branches during shoulder season. It's a great way to clean the yard and save all the processed wood for when it gets really cold
Expand Signature
Pacific Energy Super Insert
Reactions: SpaceBus and Tar12

I have the opposite problem, two teens and two adults studying or working from home means everyone is behind their own closed door, so the problem of moving hot air is worse than ever. No point keeping the kitchen and living areas warm if everybody is cold in the other rooms.

I was laid off from my job of 21 years in March, thought I'd probably be back but I made sure that I stocked up on more wood for this season just in case we went into lockdown again or I wasn't working. Got another job early August, not quite full time but getting there, the original job looks like it might never come back or very slowly if it did, so I might be burning some more than usual, but if I am I have it so no worries there.
Expand Signature
Dovre Aurora # 700
Husky # 346 XP
Brave 24-ton splitter
1987 Ford Bronco
Reactions: mcdougy

I've only had 10 burning days so far, 2 of the were 3 days long, it doesn't seem like I'm burning more at this point, but I'm also still working, doing 1 to 2 days home (we're busy here) the rest out in the field with small office visits, my only change in my schedule has been getting paid to have more windshield time, rather then show up at the shop at 7am and leave from there for field things.
For selfish reasons, I'm liking this work from home, especially when the bad weather strikes, no commuting in it, but to those with different circumstances, I def sympathize with you and I hope the future brings more stability.
Expand Signature
2014 BK Princess, Husqvarna 359 w/ 20" bar, 465 rancher w/ 20" bar, Iron & Oak 24 ton FS, Kioti CK 4010 HST
Reactions: mrd1995

Using an OWB stove, during the coldest months (November to March), I basically fill it up in the morning before I go to work and in the evening when I get home. When I am off on the weekend, I generally don’t ever fill it up, just add less wood as it needs it, so I burn a little less when I am home during the day. I usually go and fill it up right before I go to bed though.
Expand Signature
Hardy H2 Outdoor Wood Furnace
Stihl Farm Boss MS 250
Countyline 25 ton log splitter
Husky 8' splitting maul
Numerous wedges
Becoming a professional scrounger of firewood.

Friends expect to use more either from family being home or retired persons not being able to travel as usual. While they’ve stocked up more this year on wood that can season faster (doug fir split very early spring or better options), they do wonder how much they’ll go through.
Expand Signature
PE Neo 2.5

Dabster13 said:
If you live on a wooded lot, Just burn fallen limbs/branches during shoulder season. It's a great way to clean the yard and save all the processed wood for when it gets really cold
Click to expand...

PA. Woodsman said:
I was laid off from my job of 21 years in March, thought I'd probably be back but I made sure that I stocked up on more wood for this season just in case we went into lockdown again or I wasn't working. Got another job early August, not quite full time but getting there, the original job looks like it might never come back or very slowly if it did, so I might be burning some more than usual, but if I am I have it so no worries there.
Click to expand...

Looks like a lot of jobs aren't coming back

Been so warm here, haven’t even fired up yet. Should have our first tomorrow night
Expand Signature
Regency i2400 Insert
W

SpaceBus said:
Looks like a lot of jobs aren't coming back

I am afraid you are right, I'm glad that I found this one! Many older people having a tough time getting hired right now.
Expand Signature
Dovre Aurora # 700
Husky # 346 XP
Brave 24-ton splitter
1987 Ford Bronco

We’re all home now so burning habits have changed. I got an extra load of logs processed just in case. 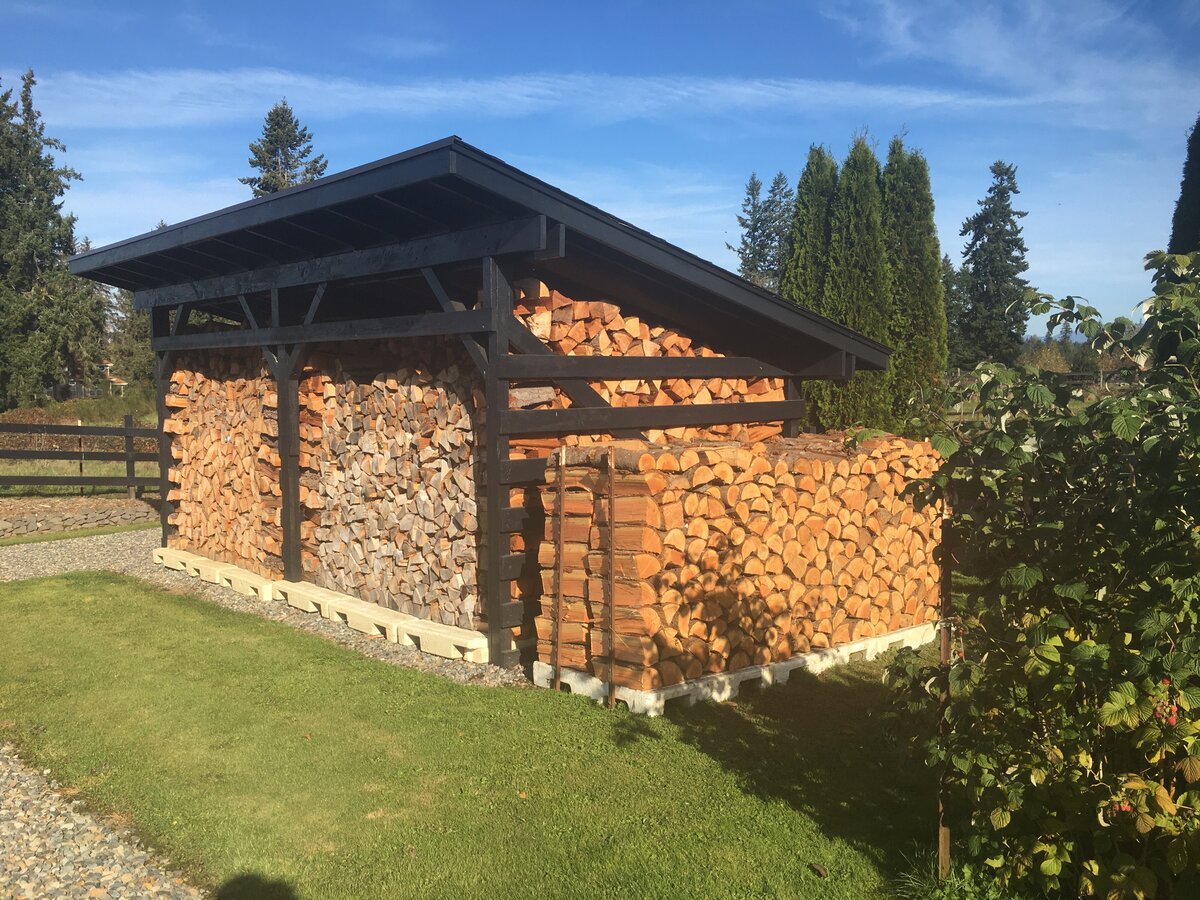 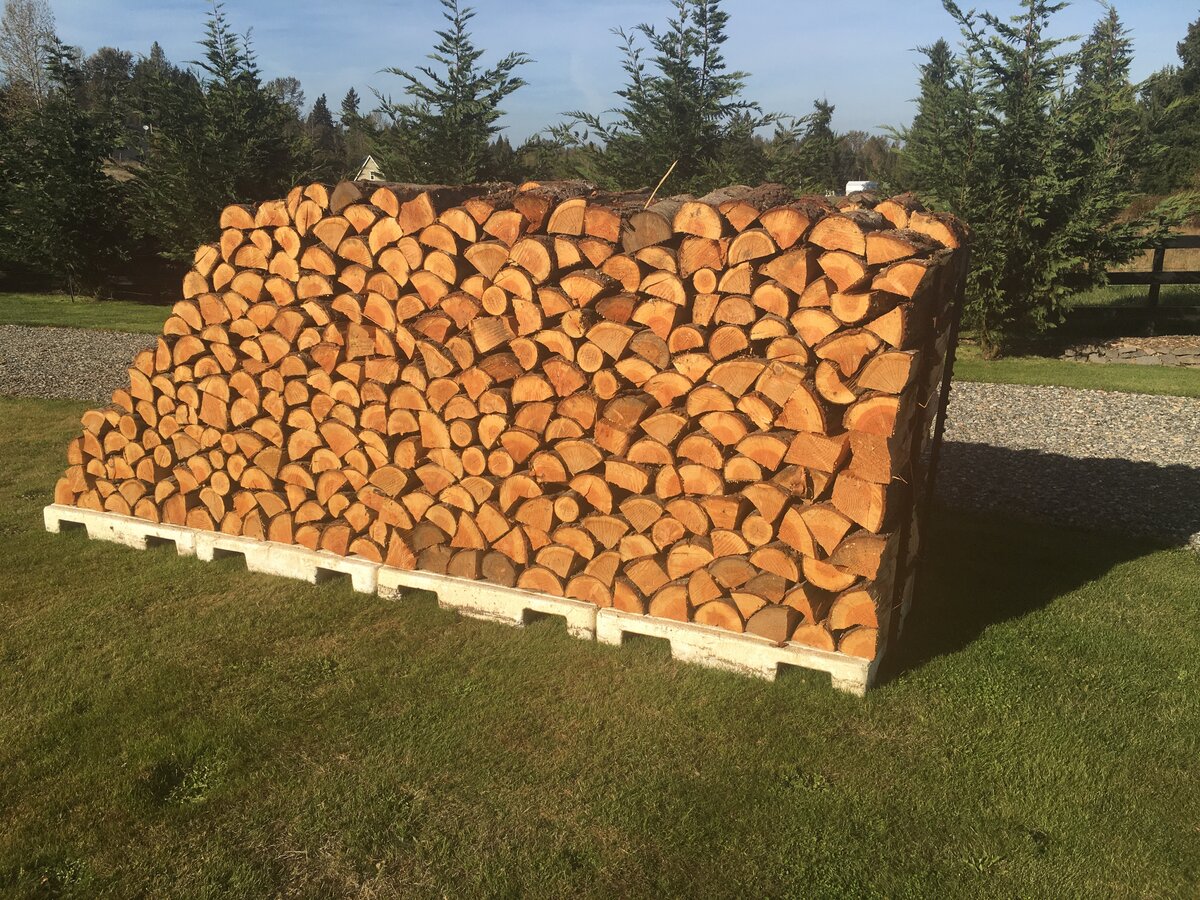 Same as most here as well, 24/7 no changes. Minus the weather patterns etc. Have 4 cords css, maybe another 1 between the minimal cutting I got to this year, and I don’t know how much left in rounds, I’d guess at least 6-7 cords there.

BigJ273 said:
Jesus. That’s beautiful. What kinda wood is that?
Click to expand...

That’s all Doug fir, plus one log of cherry mixed in. 11 cords in the shed plus about 3 outside. Since I optionally burn in a shop outbuilding with some excersize equipment for the family my wood consumption can really go up.
Expand Signature
Blaze King Princess Ultra house stove
Englander NC30 shop stove
Reactions: Riff

It is. Just do it two years ago.

I've been working from home since last March or so. I've actually found I'm burning LESS wood so far when I've been home. Simply because I don't have to error on the side of caution before I leave for work and either continue the previous night's fire or start a new one to only end up keeping the house warmer than I would like it when nobody is home. I can now let fires die out and start one whenever the house temp drops. I'm basically keeping the house temp lower now that I am home to micro-manage vs trying to manage it through a 15 minute window of should I or shouldn't I load/re-load before I walk out the door in the morning.

BigJ273 said:
Jesus. That’s beautiful. What kinda wood is that?
Click to expand...

Also, OP...we primarily heat with NG and just use our LOPI for when we're home and want it nice and warm in the main areas. Since that's pretty much every day now, I anticipate burning much more wood this year, same as you. I've got about 2 cords stacked and another half of red pine I'm going to get split up which as been drying in bucks all summer, hopefully it'll be ready to supplement if I need it.
Reactions: Highbeam
T

Man highbeam that is a pretty stack. When i build my shed next summer i will be very pleased if it looks even half as good!

Anyway, with the wife and I working from home the wood usage is definetly going up. Ive got about 4 dry cords but a lot of it is scrounged lightweight wood so it should act more like 3 normal cords... will burn through that easy at this pace probably by about the end of February. At least it will take a nice chunk out of the propane bill!
Expand Signature
PE Alderlea T5
You must log in or register to reply here.