Hello!
Like others have said in their first post, I’ve been a lurker here for a while here and have learned a lot from various threads, which I really appreciate. There is also some confusing information out there online and I would like to get your opinions (hopefully blessings?) on what I’m thinking of doing for the hearth I’m building for a new Woodstock Soapstone Co Absolute Steel Hybrid that is being delivered in about a week. So, going from the bottom up, here are my plans, with some questions thrown in. Note that I'm especially confused about insulation for the chase, at the bottom of the post.

UNDERLAYMENT/R-values: The specs for this stove require an R-value of only 0.41 for the hearth beneath it. (It comes with a required bottom heat shield). I want a low profile hearth, flush with the floor if possible. So I’m thinking of using a 1/2” layer of Durock applied over a coat of thinset on the plywood substrate and screwed down (per D-rock instructions). Then more thinset topped by ceramic tiles of various sizes to make a mosaic pattern. I’m also throwing in a few river stones throughout parts of the hearth.
If Next Gen Durock’s R-val is 0.39 and ceramic tile’s is 0.02, that would get me to 0.41. **The one really annoying thing I’ve come across recently—after lots of research that pointed to Durock being the better choice for hearth/r-values—is Durock’s own specs that state NextGen Durock shouldn’t be used for applications where the surface temp will be above 200º (or 225º for the 0.625 thickness). I’m hoping they are just saying that to cover their asses, because so many people have had good success with it in woodstove installations. Any thoughts?

THINSET: From my research, it seems a polymer-modified thinset is best, and I’m thinking of going with Mapei's Keralastic/Kerabond 2-step system for the thinset (mixing the powdered mortar with Keralastic liquid instead of plain water to achieve more flexibility for the temperature fluctuations). Somewhere (not here), I read that for fireplace applications, one should look for a thinset mortar to be rated to 400º F, but I can’t find any thinset that lists that temperature or any actual temperature for designed application/operation. They only mention extreme freeze/thaw cycles for what the polymer-added thinset is best for. Maybe I should go with “refractory cement” or “furnace cement,” but most info on here talks about thinset, which is different (right), and probably better?

GROUT: Sanded grout seems better for this application from what I’ve read, and I’m again thinking of going with Mapei’s KeraColor polymer-added, sanded grout using a 1/8” width between the tiles. Is there any reason I should space the tiles wider than that?

Lastly, INSULATION (which is where I have to start, of course, and really soon!). The piping is going to be going up through my existing exterior-wall chase, where a pre-fab fireplace used to be before I tore it out a couple of weeks ago. Right now I can just see the wood framing and original insulation board (see pic).

For piping, I’m using double-walled stovepipe out of the rear-flue exit on the stove. The stove itself will sit 8.5" out in front of the old FP as per clearance requirements. There’ll be a double-wall T at the 90º turn up the chase, and from there up, stainless steel chimney pipe for 15’ including the outer chimney.
So even though clearances are more than met on all sides, for a finished look I think I’m going to put 1/2” Durock inside the fireplace opening, painted with fire-safe paint, with a few tiles where the inside/outside edges of the fireplace walls meet, going out 5 inches to 1 foot.

I’ve been told I should put insulation behind the Durock, which makes sense for safety and energy savings. Advice varies on how far up the chimney to insulate, from the lower 6 feet only, to at least the upper chase and whatever else you want, since the air will be colder up there. Because this space is somewhat open to airflow, I’m thinking of using the safer, greener Roxul mineral wool insulation either in ComfortBatt form or Comfortboard 80, which both seem to be available here where I live. Is there any better product you would recommend? Of all the products I’ve researched in the whole journey, this one gives a solid, high temperature rating of 2150ºF, yay!

So I guess my questions here are safety related mostly. I don’t want to go totally overboard but do want to be smart. I probably won’t be burning this stove hot for months and months on end. More likely burning it low since my house is not that huge and hey, I live in North Carolina.

Given that, what do others say about how much of the chase to insulate? If I just did the upper and lower but not the middle, would that create hot/cold air pockets that might be problematic?

Also, is it ok health-wise to have the Roxul insulation uncovered/unfaced in the part of the chase that isn’t visible from the room? Should I instead cover it with Durock or some other alternative? Even though it’s safer than fiberglass to breathe, it could still be an irritant if breathed in. I do have several sheets of metal from the old pre-fab fireplace that I could maybe cover the Roxul with. --And I just saw a thread where begreen mentions crisscrossing string over the batts or boards to hold them in safely.

Finally, some people on here have documented using steel beams instead of wood for the framing in their hearth flooring and background surround. I remember one example where the required R-value was really high, at 6. Do others think that wooden framing is okay in this case, or are steel beams are necessary in the chase, even though it will be mostly stainless steel pipe there and several inches more than a 2” clearance all around it? Would covering the wooden 2x4s with some metal sheeting be recommended as an in-between option?

Thanks to everyone if you got this far and for any help you can give on these questions!

pics of gutted chase, and chase from outside with original, now-gone, pre-fab chimney. 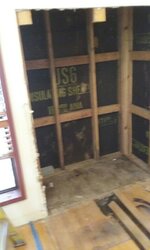 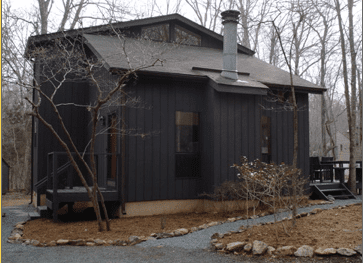 Welcome. The hearth should be fine with Durock and tile. Wood framing is ok for the low insulation requirement. Roxul is good, I'd do the whole chase and my preference would be to cover it with sheetrock and at least firetape it. This is assuming that the double-wall stove pipe will be much more than 6" away from the chase walls. No harm using Durock if you want more peace of mind.
Toggle signature
PE Alderlea T6, Jotul F602
The most important tool in the wood burning process and the largest variable is the one that is running the stove.

begreen said:
Welcome. The hearth should be fine with Durock and tile. Wood framing is ok for the low insulation requirement. Roxul is good, I'd do the whole chase and my preference would be to cover it with sheetrock and at least firetape it. This is assuming that the double-wall stove pipe will be much more than 6" away from the chase walls. No harm using Durock if you want more peace of mind.
Click to expand...

Thanks, begreen! The firetape is something I did not know about. For the Roxul, is there a particular kind/product of theirs you would recommend over another? Some (in the Safe n' Sound line, I think, and maybe the ComfortBatt) have R15, R30, etc ratings, some do not seem to list an R-value at all, which seems strange, but then I know that Roxul is also used for soundproofing so that's a completely different reason and maybe it should have decibel ratings instead

Re: the pipe in the chase, the vast majority of it will be Class A stainless steel starting right above the double-wall T, which is directly behind the stove (18 inches behind it, 30 inches up from the fireplace floor). So the clearance requirements are only 2" for all that.

I just did a pad with Durock nexgen and the label said it was suitable for hearth installs. Not sure if its rated differently here in Canada. I'll see if I can find a label I peeled them off.

Gotrek said:
I just did a pad with Durock nexgen and the label said it was suitable for hearth installs. Not sure if its rated differently here in Canada. I'll see if I can find a label I peeled them off.

Sent from my SGH-I337M using Tapatalk
Click to expand...

Thanks, Gotrek, that would be great to see a label.

Ok I found it, So it's approved in canada it has a Canadian / Underwriters Laboratories Rating as a heatshield... Probably not applicable in the US.

Gotrek said:
Ok I found it, So it's approved in canada it has a Canadian / Underwriters Laboratories Rating as a heatshield... Probably not applicable in the US.

Thanks, Gotrek. I know Canada has (usually) more stringent requirements than the US for fire applications. Also note that it says to not be put closer than 20 inches to the heat source. At least it's a clear number. The lack of clear info on all the materials I'm looking at is annoying me, and strange given how important they are for safety.

Regulations/standards usually start out about safety but in the end its 95% for income 5% for actual safety.

The Hearth Room - Wood Stoves and Fireplaces Jan 15, 2023
bholler
B

Advice/recommendations for microconcrete/microcement application on hearth and surround?