Hello everyone,
New to this forum, not new to forum etiquette.

I have searched and searched to no avail... There is not very much info on my stove. I have worked with my general knowledge of things and applied common sense to link other stove solutions to mine but still have a few questions I would like to resolve.

Picked up this stove about a week ago for $300.

It came with the stove, two bags of 2018-19 season TSC pellets and a double wall exhaust pipe.

I purchased a wall thimble and installed the stove straight through wall on top of a home made brick/mortar pad.

Stove worked well the first two nights, minus extreme sooting. I went out and purchased 6 bags of Energex because it was what I could find that fit recommended pellets from the user manual.

On the third day I noticed a LARGE seal leak on the door. Purchased 5/8" bronze rope gasket and replaced it.

Stove burned a million times hotter but it still soots like crazy. I'm talking full glass coverage from top to about 1" off the bottom within about 2 to 4 hours.

I read on here that that is usually an airflow concern.

Today I gave the stove a THOROUGH cleaning (what a pain some of those nooks are) and noticed that I could slide my burn pot back and forth about 1/4" on the right side and about 1/8" on the left.

I see online they have a gasket for about $5.

Does anybody know the proper procedure in replacing the gasket for this stove? Or is that small play normal?

New to stoves, but it seems a shame you're not getting an answer.

As far as the sooting goes, what they told me was that the fire needs more air, and they appear to be right. I gradually opened up the damper, and now the flame is much livelier, and there's no soot buildup. I still get ash on the glass, of course, but it takes a few days to build up and it's much lighter in color than the soot (white and grey, as opposed to that thick black). I don't think there's any way to prevent ash buildup, although some stoves apparently have an airwash feature that slows it down somewhat.

If your stove is supposed to have an airwash feature, then from what I've read on this forum, there needs to be a gap in the door gasket or the glass gasket (I'm not real clear which). Where that gap should be, top or bottom, will depend on the model and also on the year it was made, apparently. If you search for the manual on-line, you might find some information about it there.

On my stove, the burn pot is removable, so there is an inevitable amount of play. I don't think the fact that you can wiggle yours a bit is any kind of problem.
Expand Signature
Hudson River Chatham, manufactured August 2013, purchased September 2018
Reactions: TheMaineStover
T

Thank you for your response!

The more and more I tinker with it, I am beginning to notice that the air problem as you said is a HUGE factor in the soot.

This is my first pellet stove so I dove in with no knowledge except what I have read in here and I also downloaded a PDF of the manual.

I have been running the stove on the maximum low setting continually due to the fact that there is also a wood stove on the opposite side of the home. Those are the settings that have been giving me a ton of soot build-up. Just recently I have upped the airflow from 1/9 to 2/9 for a 1 feed rate and have been generally running it 5/9 airflow and 3/9 feed rate for less time and shutting down for about two hours or so and have seen a tremendous difference in soot, which is great! As for the airwash, I don't think this stove has one as it is a rope gasket on the glass as well.

The burn pot is what concerns me because I see most people post about a removable burn pot. My stove is a little different for what I have seen so far, maybe I just have not read into it enough but it seems to me that this stove has a burn pot, and then theres a removable tray where the pellets actually burn in the burn pot? Or maybe Im just calling this part my burn pot and it is not actually my burn pot, haha.

I just put the stove into shutdown cycle, I will try to get explanitory pictures posted up, maybe you can help me out?

My stove has both a burn pot, which is basically solid, and a burn-pot liner, which has lots of holes in it. The liner catches the pellets, and it sits in the pot in such a way as to distribute air evenly to the fire. The burn pot itself has two holes in it, which fit over the igniter tube (smaller) and the combustion air tube (larger). The liner is designed in such a way as to stand off from the floor and walls of the pot a little bit, to allow air to get around it. Its holes are much smaller than the two holes in the pot itself.

The pot fits fairly tightly over the two tubes, but there is a certain amount of play. I sit the burn pot over them in such a way as to keep it as close to the front of the stove as possible, so as to be sure to catch the pellets as they drop. The liner has a tall side that goes toward the front of the stove, to help catch pellets. This design works pretty well, and I rarely see stray pellets. The liner has a certain amount of wiggle room inside the burn pot, and as I mentioned there is also a certain amount of play in how the pot fits over the igniter and air tubes, but that seems to be how they are designed. I think you're fine. 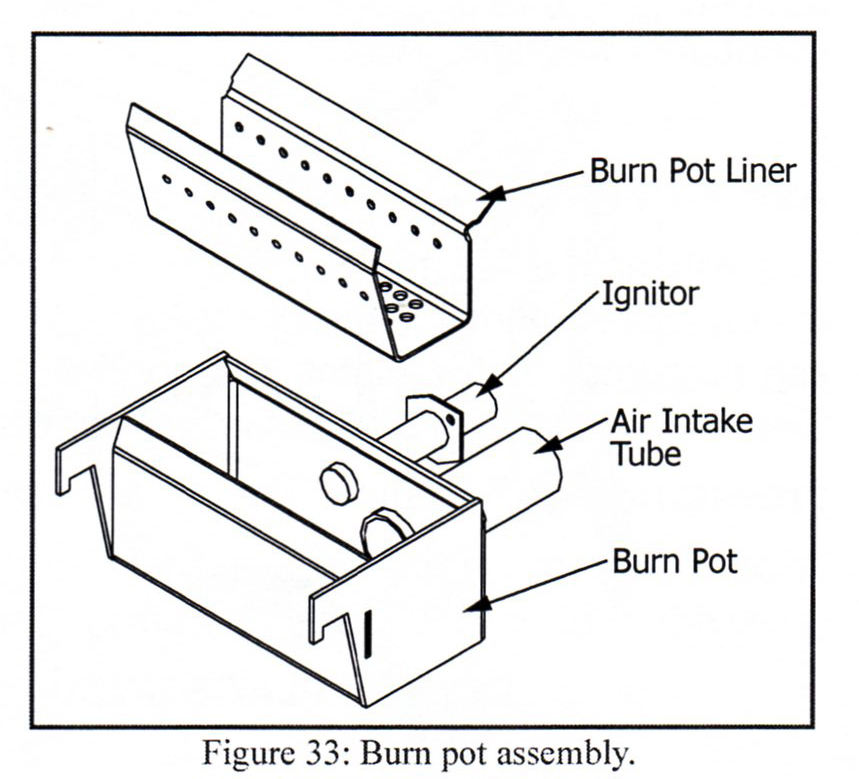 Okay, I see what you're saying.

So, my liner is the part that comes in and out freely. My burn pot is set up a little differently, but it's basically the same deal.

I think you're correct on the free play, the only thing keeping me questioning is theres a small hole that looks almost like a bolt hole in the back that's empty.

I've also been trying to find my igniter to replace it as it's bad. I can locate it inside the guts of the stove but I can't see it anywhere near the burn pot.

My stove is set up kind of like your expanded picture, but the top hole is my auger feed and bottom is outside air.

I'm gonna try to attach pictures, but I'm on my phone so it's not working for me, let me see what I can do.

Got it... Okay first image is burn pot sitting regularly. Second image is me pulling it towards me and third is me pushing in. It is hard to see but if you look at the lip of the ring around the auger you can see how much it actually moves. 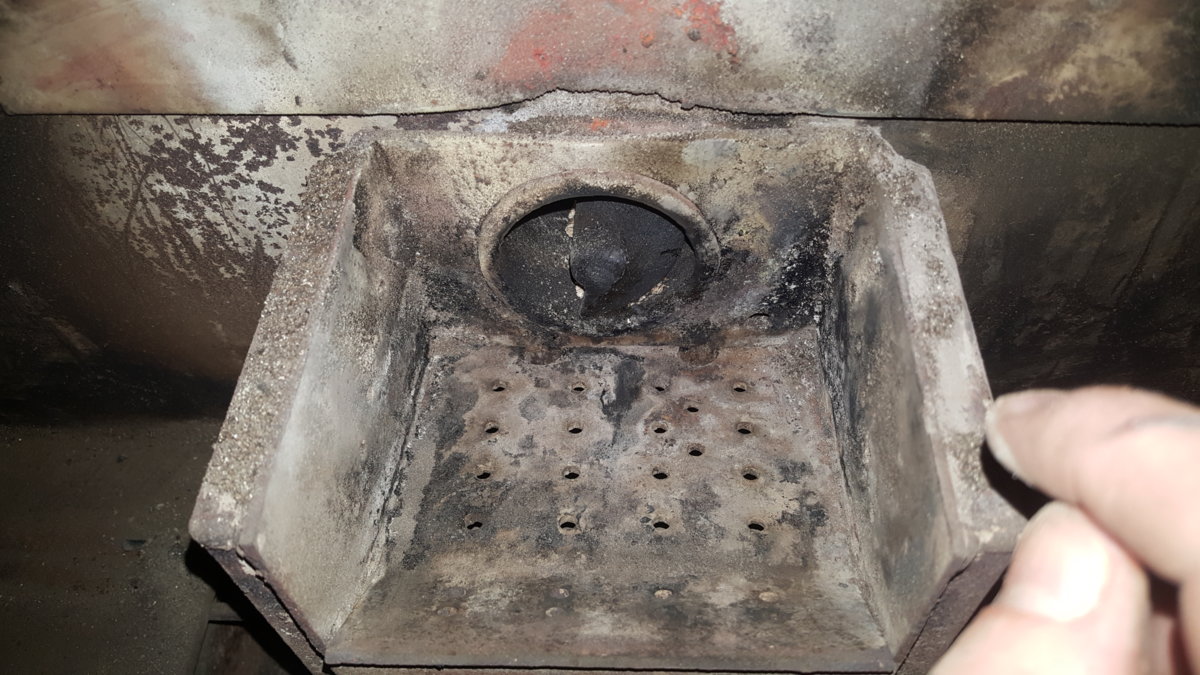 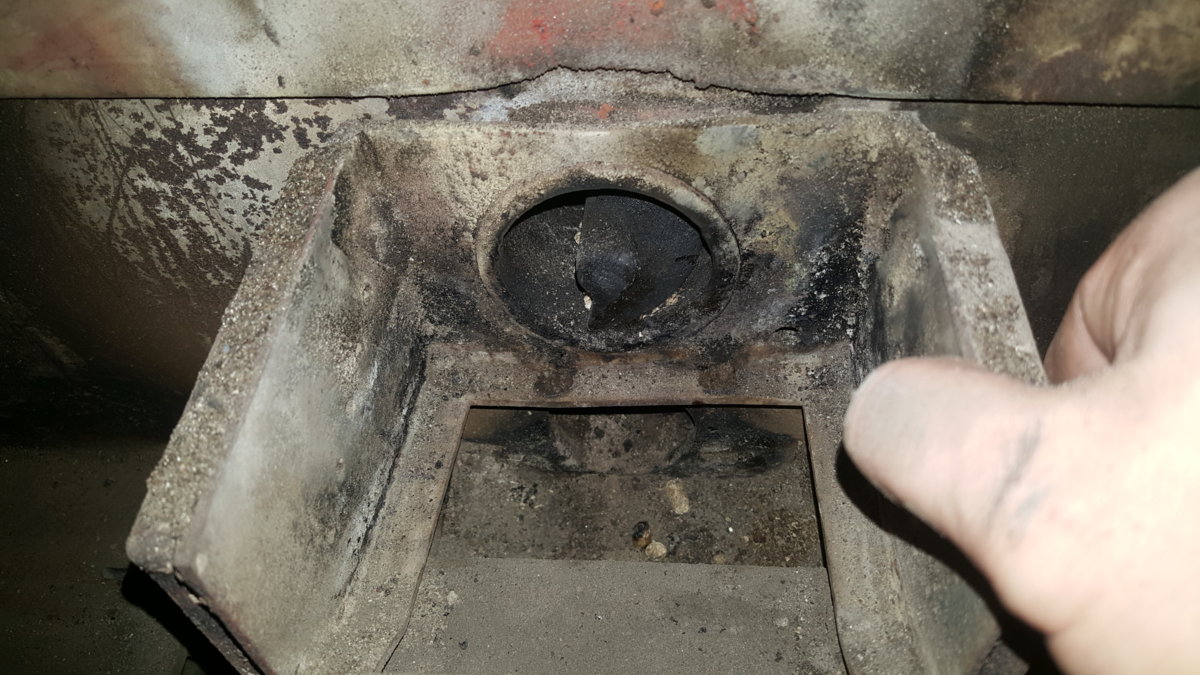 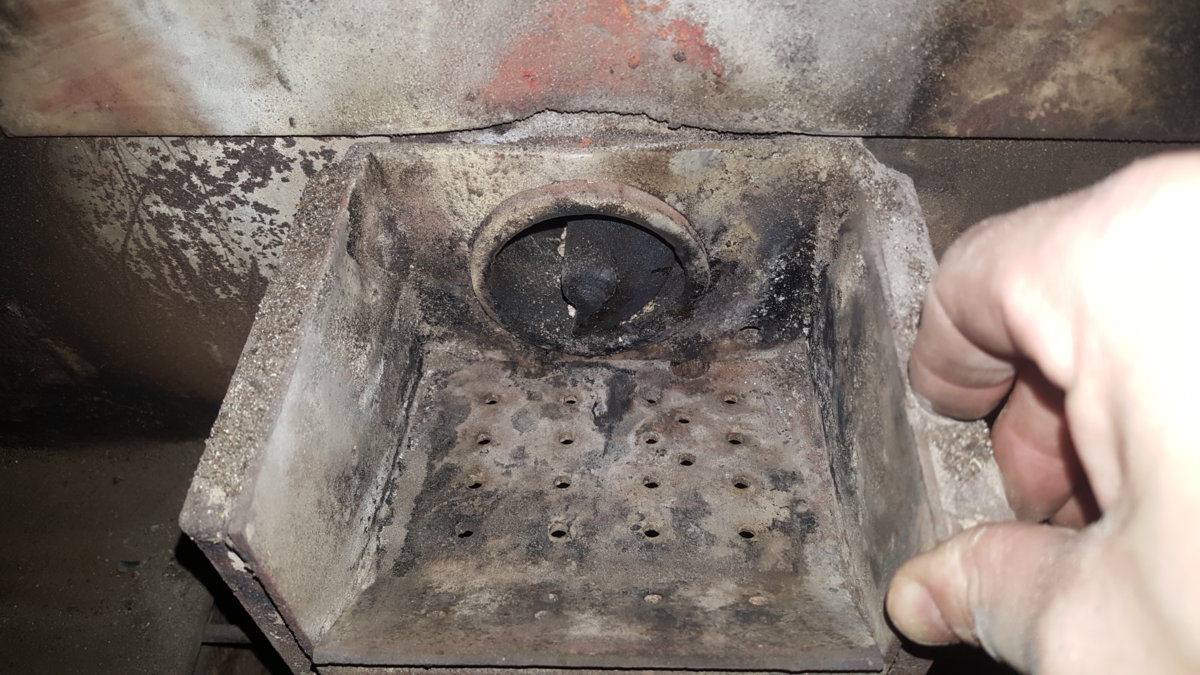 A couple other items to check is the hopper lid seal and the ash drawer seal. If either of them are leaking they will contribute to the shitty burn. I looked up your manual and i see its very much like ans englander 25pdvc/25pdv and they may have some of the same issues like a very weak air flow wich is problematic. If you could take some pics of you burn plate ans the area under the burn plate we might be able to hepl advise on some good upgrades for the stove
Expand Signature
Are you SURE you cleaned it good?
Where is your manual?

Lol we posted at the same time.
Expand Signature
Are you SURE you cleaned it good?
Where is your manual?

Lol, yeah there are those three pics... I can take better ones when I cool down again tomorrow morning if you need?

Nice pics! The first thing is get the vac out and clean the inside of the pot. Is the pot loose and movable? Under the ash lip there is 2 bolt heads they are what hold your burn pot tight against the back wall of the stove. The hole to the rt of the auger is your igniter hole

Last edited: Dec 19, 2018
Expand Signature
Are you SURE you cleaned it good?
Where is your manual?

Check and see if there is a hole on each side of the burn pot below the burn plate itself.

Last edited: Dec 19, 2018
Expand Signature
Are you SURE you cleaned it good?
Where is your manual?

If your burning dirty you will need to do another thorough cleaning much sooner than normal too
Expand Signature
Are you SURE you cleaned it good?
Where is your manual?

Wow, thank you for the super detailed information, Ssyko!

I have the stove going right now for the rest of the night but tomorrow is supposed to warm up exceedingly... Almost 40.

I'll shut it down and pull out the vaccuum and check for those bolts because it is extremely loose.

Also, should you be able to physically see the igniter, do you know? I mentioned that hole before in one of the previous posts thinking it was a bolt hole because it looks empty.

You should see it glow when it is in start up. Check in the back and see if it has been removed. If it is missing that is another leak, either put in an igniter or plug the hole.
Expand Signature
Are you SURE you cleaned it good?
Where is your manual?

It's plugged in and fuses are good, I'm assuming it went bad.

I'm gonna give it a couple of minutes to cool, it just shut off, and I'll post pics of my ash pan to see if it should also be sealed. I'm pretty sure that those two bolts you mentioned are non-existant in this stove for whatever reason.

Get some pics of the front and back of the stove too. Is ther a metalic sticker on it that tells the age amd model number?
Expand Signature
Are you SURE you cleaned it good?
Where is your manual?

I will... Sorry, I got my dates mixed up, tomorrow is gonna be the beginning of the warm spell so I won't have pictures until then.