is that's what you call it "carby"--good name--lol Everything sure looks good and wrote the KA recipe down and will use my bread machine in time--looks wonderful...clancey
Reactions: ispinwool

I have a quote in my kitchen: "I can either take control of my wellness or I'll be forced to deal with my illness."

Hubby and I are watching our carb intake too...he's down 55# and I'm down 60#. Unfortunately, it's required reducing almost ALL carbs: pasta, bread, potatoes, sugar...general intake is less than 30 grams/day...totally stinks but we honestly feel sooooo much better.
Click to expand...

The past three winters my weight usually gets up to 234 plus but after giving up bread and a few other things, I'm still at 206 this morning.

Congrats on the weight loss and yes, it does feel great.
Toggle signature
Get
It
Before
It
Rots

ispinwool said:
I have had great luck with King Arthur recipes! ...my K. A. sourdough starter is resting in my fridge--I've heard that sourdough has less effect on blood sugar levels than regular yeast breads so I've been using sourdough as much as possible....well....when I make bread...which isn't often because it's still carby. (but oooooh soooo yummy!!) LOL
Click to expand...

i'll have to look into that sour dough and blood sugar. i'am diabetic but have found a couple of things that drop the blood sugar for first thing in the morning. hard boiled egg and peanut butter. thank you for the tip.
Toggle signature
vermont castings defiant 1
hearthstone 2
GO PATS
GO BRUINS
frank
Reactions: clancey and ispinwool

Yeast set is worth buying, if you bake. I also buy yeast in the 1-lb. brick. Sometimes two at a time. Freezes great. 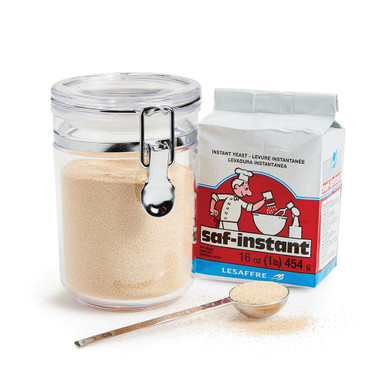 Yeast set is worth buying, if you bake. I also buy yeast in the 1-lb. brick. Sometimes two at a time. Freezes great.

I've used yeast that was in the freezer years past the date on the package, and it's been fine. That'll happen if I buy 2-lb. Even with baking a fair bit, does take me a while to go through 2 pounds of yeast 2 1/4 teaspoons at a time. 😀
Toggle signature
Lopi Answer insert
Stihl MS 180 C-BE Mini Boss
6- and 8-lb. mauls
Reactions: Dan Freeman

ispinwool said:
I have had great luck with King Arthur recipes! ...my K. A. sourdough starter is resting in my fridge--I've heard that sourdough has less effect on blood sugar levels than regular yeast breads so I've been using sourdough as much as possible....well....when I make bread...which isn't often because it's still carby. (but oooooh soooo yummy!!) LOL
Click to expand...

I’ll need to look into their sourdough. I’ve just recently started using more traditional wheat flour as opposed to einkorn which I’ve used for years, but I do love a good sourdough. I find it’s easier to digest, and to me it just tastes so good.
Toggle signature
Current home: Enviro Kodiak 1700 Insert

PaulOinMA said:
I've used yeast that was in the freezer years past the date on the package, and it's been fine. That'll happen if I buy 2-lb. Even with baking a fair bit, does take me a while to go through 2 pounds of yeast 2 1/4 teaspoons at a time. 😀
Click to expand...

I haven’t bought yeast from King Arthur, but I do also buy it in large quantities and freeze it. It works well.
Toggle signature
Current home: Enviro Kodiak 1700 Insert

Nan headed to her mom's in NJ last night. Has to go to her brother's in NC. Easy dinner. There was no marinara sauce in the freezer, so I made a batch. Leone's Marinara Sauce from Leone's Italian Cookbook, 1967.

Casserole elbows with marinara sauce, meatballs, and mozzarella topped with grated Romano in a heated cast iron skillet. Place under broiler in toaster oven to melt cheese on top. Yum! 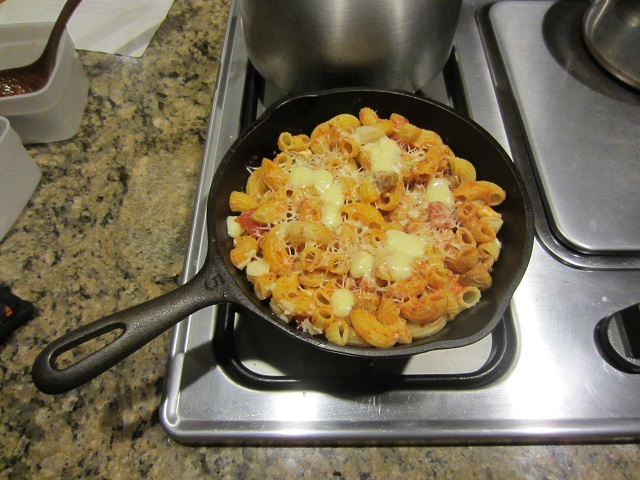 We’ve had crazy roller coaster weather this winter here in Texas. Yesterday was a misty 59 degrees (after 70 and sunny the day before), but today we spent most of the day around 24 degrees. (It briefly went as high as 27 when the sun popped out briefly.) Because I had to be outside yesterday afternoon putting frost cloth on citrus trees and onion transplants and had to pick up some groceries in the evening, I needed an easy meal. I also wanted to make sure that I had some good food prepared just in case we lost power with the predicted ice today. I used my two crock pots and cooked a ham in the large one and mashed potatoes in the small one. We ate them with broccoli.

We did not lose power today thankfully, and so we had the ham and potatoes (this time mixed with sautéed onions and a tiny cabbage that I rescued from the garden) for lunch, and I carried on with my plan of roasting a small turkey for dinner. I figured that a day in the 20’s in south central Texas is a good time to use the oven for a few hours. (Our local grocery had ten pound organic turkeys on clearance after Thanksgiving, and so we bought two or three.). It had been defrosting this week in our spare refrigerator, and I think I would have boiled it if we had lost power (gas stove). I’m glad that it didn’t come to that, and we had a nice roast turkey; dressing made from wheat bread, onions, mushrooms, spinach and cranberries; and green beans on the side. 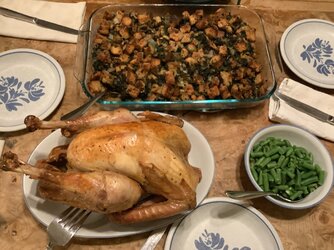 Yesterday was supposed to be pizza day at our house, but the store did not have the pepperoni I had hoped to use, so I changed plans. (We don’t usually have pepperoni at all, but I had said that we would have it as a treat on the next pizza day, hence the change.) My oldest had asked recently for me to make more Indian food, so I decided on samosas with a spiced ground beef with potato and onion filling. I’m no expert on folding these, but I ended up pleased with how they turned out. We had enough for two meals, but I ended up with extra filling, so that’s in the freezer waiting for another day when I’m feeling ambitious. It did take a while to roll and fold thirty-six of those little guys. 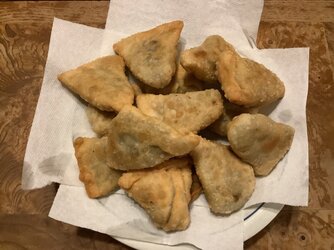 We had simple cauliflower on the side.
Toggle signature
Current home: Enviro Kodiak 1700 Insert

They sure look nice and I love Indian food..clancey 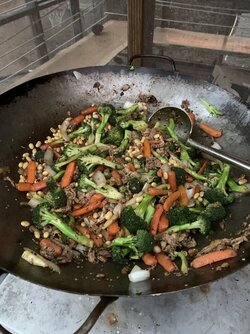 My wife wants filled focaccia for Super Bowl Sunday. Great choice. Haven't done it in a while.

Recipe to play with for filled focaccia when we first made them: https://www.food.com/recipe/bread-machine-stuffed-rosemary-focaccia-322511

Doing the second rise in two no. 12 cast iron skillets. Pictures from December 2015. Been a while!

Mine will be Italian sausage, mushroom, sun-dried tomato, mozzarella, and garlic. 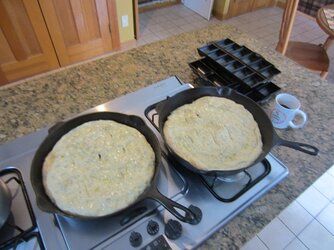 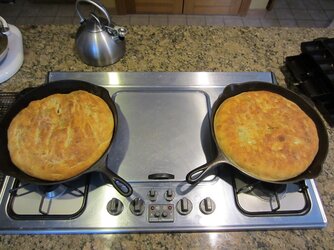 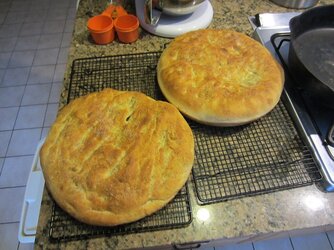 nice recipe and a wonderful cook..enjoy...My late husband was a wonderful cook too and I enjoyed so so many wonderful meals and in those days I I could eat...thanks for sharing. I love my old black pots for they hold the heat so well...clancey
Reactions: Dan Freeman

Focaccia turned out great. Made two in no. 12 skillets. Mine was sausage, mushroom, sun-dried tomato, mozzarella, provolone, and garlic. Nan's was ham, goat cheese, and sun-dried tomato. Served with homemade marinara. 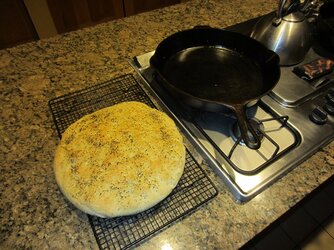 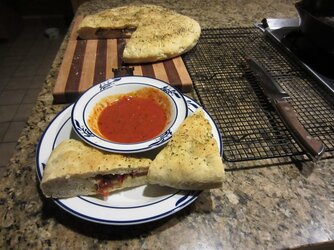 Sure does look good..mmm clancey

@PaulOinMA , that stuffed focaccia looked so good I decided to give a try to stuffed pizza. I’ve never done it before, and I put all the fillings in the middle instead of having sauce and cheese on top as most recipes seem to indicate. It was a hit with most of the family. The five year old still hasn’t really developed a taste for spinach, so he wasn’t as thrilled, but a ate a good portion of his piece.

I used this recipe for guidance, though I didn’t use sausage. I used uncured pepperoni, onions, peppers, and spinach all cooked with some sauce I had made in the summer and frozen. I cooked it down a good bit to get rid of excess moisture, and it worked inside the crust. I made one large pizza in a 10 x 15 pan and cut it into twelve pieces. One piece was enough for each of us except my teenager. 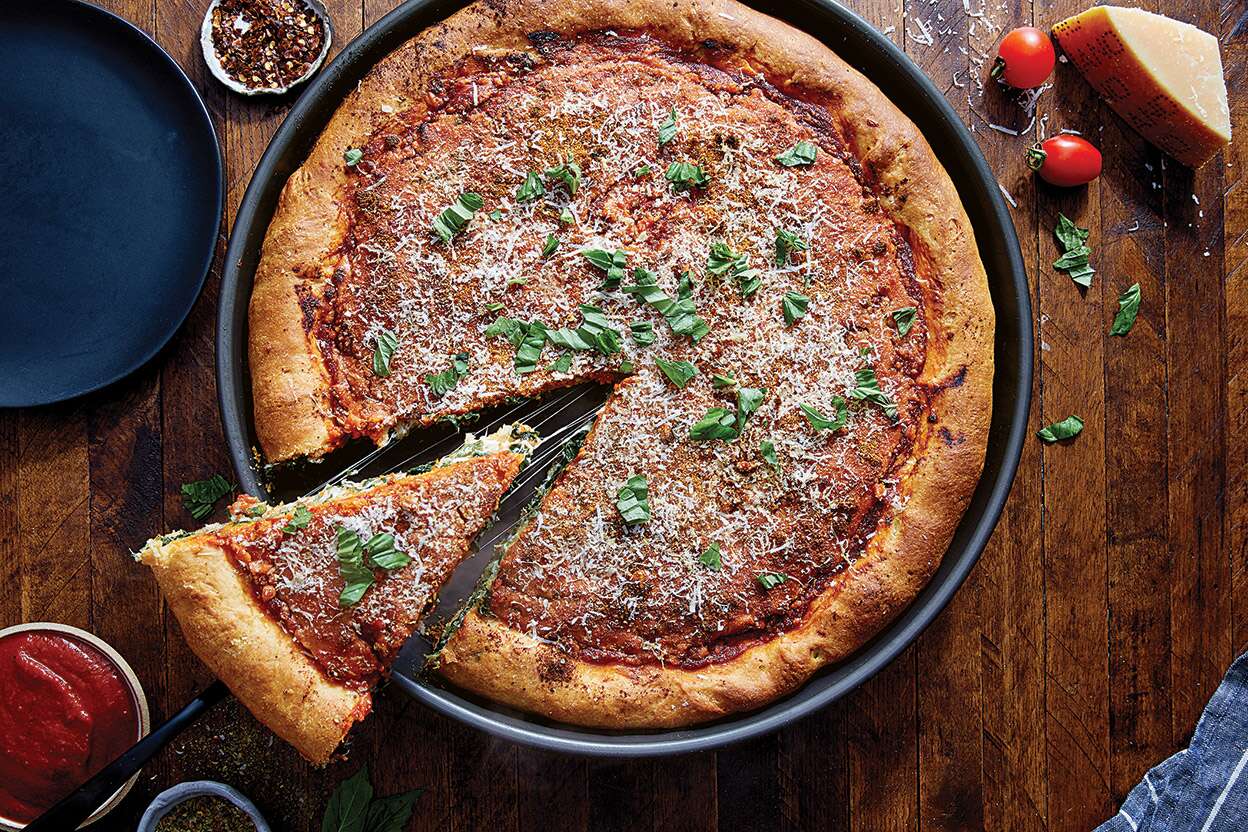 A thick (2 1/2") double-crust pizza stuffed with sausage, mozzarella, and your choice of veggies; then topped with marinara and your favorite hard grating cheese. 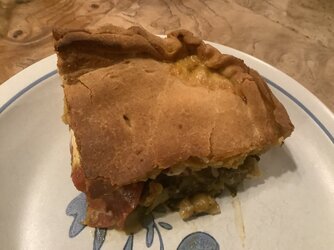 I’m not always up for cooking such dishes, and I thought I’d share a couple photos of “snack lunches” that we occasionally eat at our house. There’s still work involves with these, but it’s work that‘s done in advance for the most part and can then be called up for a quicker meal.

The first photo shows pickles we made in the summer, oatmeal bars, craisins, white cheddar cheese, and some teriyaki meat sticks we made from ground beef and spices the other week. This was a meal for three.

The second features some guacamole I made recently because avocados were on sale at the local grocery. We used it to dip corn chips (not homemade) and dehydrated cucumbers and tomatoes from the summer produce. I still have some hot peppers on my counter from our last harvest, but I’m slowly using them up. I think I used four in this large batch of guacamole. 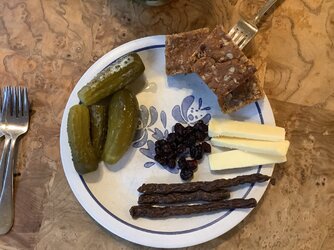 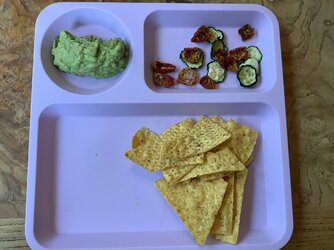 For me uncured pepperoni sounds better for a pizza then sausage anyway and the taste would give it a "zip" so to speak--lol...Gosh I am hungry...Thanks for sharing and my late husband always mentioned a stock pot and do you people have a stock pot and how does that work? clancey

The wife had made these for me before so yesterday under her watchful eye, I made a batch, dang they're good. We don't use the topping in the recipe, we use brown sugar with cinnamon sprinkled on the top.

The recipe is from a cooking show that's on our local TV station out of Watertown NY. 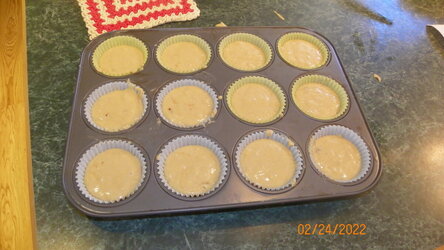 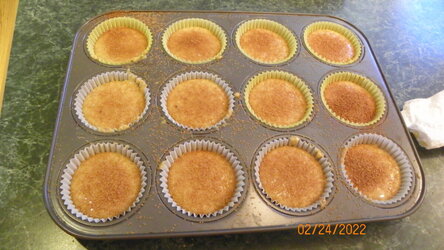 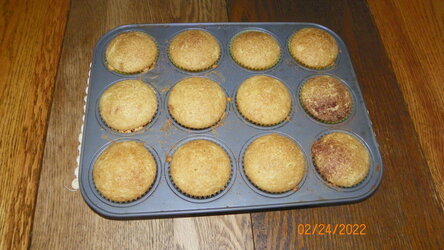 Toggle signature
Get
It
Before
It
Rots

A couple of weeks ago the local grocery store had an excellent sale on organic strawberries. We got five pints for fresh use and freezing. My oldest daughter wanted to make strawberry shortcake. I helped, but she did a good portion of the work, including the decorating. 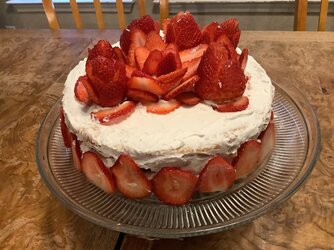 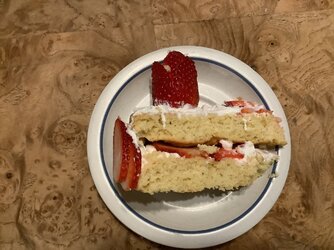 your oldest daughter is talented. that cake looks like a pro made it. and looks delish
Toggle signature
vermont castings defiant 1
hearthstone 2
GO PATS
GO BRUINS
frank
You must log in or register to reply here.